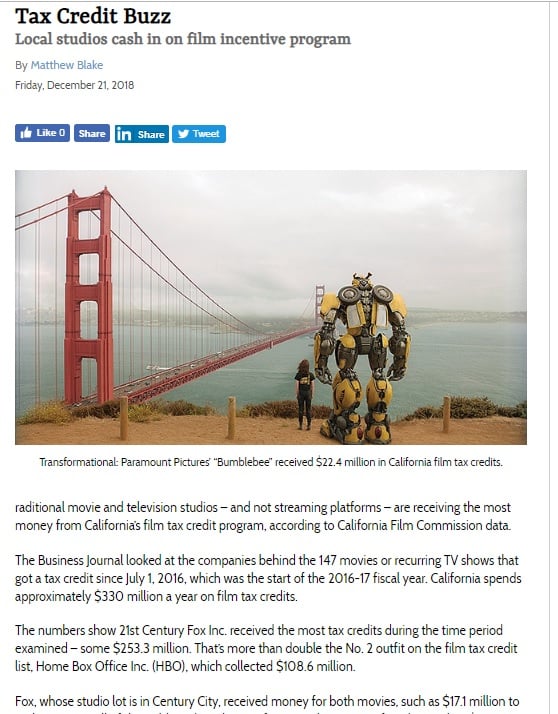 LA Business Journal recently published an overview of the studios receiving money from the Film & Television Tax Credit, and it is yet more evidence that the credit is factoring into California location decisions made by the major studios, enabling significant production in California, supporting many thousands of jobs.

LAEDC’s report on the ROI of the tax credit served to inform legislators of the true value of the program, just before the successful reauthorization vote, and LAEDC’s recommendations to increase the ROI of the program also led to significant changes, such as the increased program value to $300 million annually, as well as other specific changes designed to increase the positive jobs impact.  SCAG’s sponsorship of the LAEDC report was also notable.

While this report was done several years ago, it stands as a testament to evidence-based objective research to help guide economic development policy, especially where it supports globally competitive industries that employ tens of thousands of people in the state and in Los Angeles County.

The LA Business Journal article didn’t go into detail on the jobs figures, but runaway production had become a catastrophe for the local economy and this program effectively stopped and reversed that drain on our jobs base.  While many tend to think of the visible elements of movies such as actors and directors, those salaries are NOT compensated by the tax credit.  Rather, the tax credit supports the thousands of “ordinary” folks like key grips, lighting experts, prop designers, and the countless other skilled positions that some of your neighbors probably hold.  These neighbors in turn spend on local goods and services, and pay taxes which offset the cost of the program, leading to a stronger economy with greater opportunity for all our residents.

Recently, California Film Commission provided more data on the positive boost to wages and employment, as detailed in this report published in November 2018: