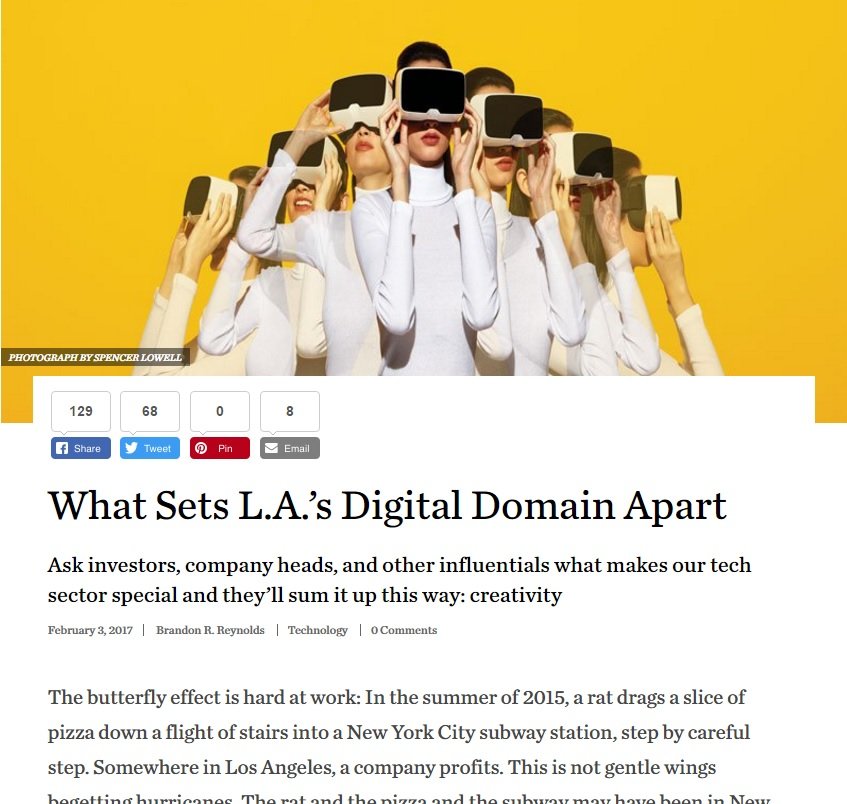 Ask investors, company heads, and other influentials what makes our tech sector special and they’ll sum it up this way: Creativity.

So begins a profile of the Los Angeles high tech sector, which employs near 400,000 workers, depending on how you define the sector.  This part of L.A.’s economy is providing good economic opportunity for our region’s residents and increasing the region’s prosperity.  Read the Los Angeles Magazine article below, and for related reading, visit LAEDC’s InnovateLA website and see LAEDC’s report, High Tech in L.A.

Read the entire article at http://www.lamag.com/longform/sets-l-s-digital-domain-apart/

Ask investors, company heads, and other influentials what makes our tech sector special and they’ll sum it up this way: creativity

The butterfly effect is hard at work: In the summer of 2015, a rat drags a slice of pizza down a flight of stairs into a New York City subway station, step by careful step. Somewhere in Los Angeles, a company profits. This is not gentle wings begetting hurricanes. The rat and the pizza and the subway may have been in New York, but their images—the very soul of what became the popular #PizzaRat meme—floats in the IP heaven of L.A.’s Jukin Media, right beside Chewbacca Mom, a guy getting kicked in the head by a train conductor, and other collective memories as valuable as they are shareable.

Jukin scours YouTube for feel-good clips—cat videos, baby ducks eating soup, the dramatic but minor physical calamities that have populated America’s Funniest Home Videos for a generation. Then for a fee of hundreds or thousands of dollars split between the people who filmed them and the company, Jukin licenses the material to build viral videos that it pushes to morning-TV talk shows and publishing outfits like Hearst. “We’re looking for a particular piece of content, these magic moments that people are creating,” founder Jonathan Skogmo tells me. Jukin groups thematically similar clips on its YouTube channels (its “verticals”) and puts them together as TV shows that are aired internationally. The company focuses on universal content because it’s the most likely to go viral—and to be repackageable. From licensing to talk shows or commercial producers and selling to international cable distributors, Jukin squeezes every possible dollar from each clip. “How many ways can we skin that cat video?” Skogmo says, a summation that sounds to me like something he says often, which is fine and right for a decent bit of branding.

Skogmo came up with the idea for Jukin in 2005, when he was working at a TV show called Country Fried Home Videos. Going through piles of mailed VHS tapes in search of what wasn’t quite yet known as “content,” he realized that it might be easier to mine such things online. After discovering a trove of crotch hits and the like at a young site named YouTube, Skogmo was inspired to launch a business in his apartment in 2009 that eventually became Jukin, located these days in a neighborhood near Culver City—less than a mile from the Beats HQ and a five-minute walk to Maker Studios, an online child of Hollywood that manufactures shows and stars mostly for, yes, YouTube. YouTube, meanwhile, has its own production machine a few miles west, next to a 12-acre complex Google bought in Playa Vista to enlarge its already-noteworthy footprint in Silicon Beach, that loose brand we’ve stamped onto L.A.’s emergent tech sector.

The billions of dollars in play and the cultural sway of tech have attracted the entertainment industry. Disney bought Maker Studios for north of half a billion dollars in 2014. Lionsgate, Warner Bros., and DreamWorks are looking at YouTube and its stars for future projects. Comedians like Reggie Watts are using VR to digitize the stand-up stage. In all sorts of ways the boundaries between L.A. industries are blurring. Video game studios borrow elements of filmmaking for their releases; Hollywood makes movies out of said games, borrowing back its techniques as we all hurtle toward a media singularity.

Like that rat, the history of the internet belongs in part to L.A. The first internet transmission was sent from UCLA to Stanford in 1969, and the companies that hatched the semiconductor industry, Fairchild and Intel, began with a Caltech grad named Gordon Moore. But those two corporations began in Northern California, putting the silicon in Silicon Valley.

Bill Gross is the creator of Idealab, a business devoted to starting start-ups. Gross points to the essential distinction between Up There and Down Here: Silicon Valley was founded on the infrastructure of the internet—the semiconductors, the routers, the hardware. L.A. has its history of aerospace and science resources, but it wasn’t responsible for making tech’s stuff. Gross, like Moore, came up at Caltech; he sold a couple of businesses in the ’80s and ’90s, including one that allowed search engines to monetize clicks, which Yahoo bought for $1.6 billion and which is part of the model that generates 90 percent of the revenues for Yahoo and other search giants like Google. Idealab has given life to 150 companies, 90 of which have survived; the first was Citysearch, a Yelp precursor Gross drummed up while trying to vet barbershops on a wedding trip to New York. It’s managed to hang on since 1995.

The L.A. tech sector was a lonely place for a while. E-commerce platforms like Ticketmaster launched, and the video gaming industry exploded during those early days, but then something came on the scene that promised to put L.A.’s finest products into your pocket. “The iPhone, which was apps and entertainment. Those both activated core talent in L.A.,” says Gross. Since then, “mobile” has become an essential part of modern life. “When you have 3 billion people spending 300 minutes a day doing something, what are we going to do? How they spend their time with that device, with that system—that’s what L.A. minds are good at figuring out,” he says. “That’s what the entertainment industry and these technical industries are great at figuring out.”

You see it in Maker Studios, which produces and distributes short personality-driven clips that owe as much to the self-focus of reality television as to the interactivity of social media. It’s what the kids are watching. (It’s what the kids are being.) Yahoo, Facebook, and Google have set up L.A. outposts not because they ran out of room Up There (though real estate is cheaper a few hundred miles below San Francisco) but because they want to tap into the talent Down Here.

That is what Suster has seen coming our way in his nearly 20 years as an entrepreneur and, since joining Upfront in 2007, an investor. Silver haired and sharp featured, he is as composed and businesslike as you’d expect a partner in a firm managing a billion dollars from its Santa Monica offices to be. So it’s delightful to hear him go off on how much he hates the “Silicon Beach” appellation. “It’s just dumb,” he says. “We don’t need a moniker. We’re Los Angeles. We’re the second-largest city in the country.”

One can get lost in all the places that have riffed on Silicon Valley: New York has Silicon Alley; Portland, the Silicon Forest; Phoenix, the Silicon Desert; San Jose and Austin both claim Silicon Gulch, while Philadelphia lays claim to Silicon Valley Forge and Virginia fans itself on the digital veranda of Silicon Plantation. Suster thinks “Silicon Beach” is not only a cliché but a misnomer. Where is everybody? “I’d say disproportionately they’re in Santa Monica right now and maybe a little bit in Venice, but you have a huge community of start-ups in Culver City,” he tells me. “Playa Vista is where everybody’s going once they acquire scale. You have a huge, growing community in downtown Los Angeles, and they’re building the commercial real estate to support that.” Tech is all over the city, “but in the early stage there’s probably a little more activity in Santa Monica than anywhere else.”

Indeed, the start-ups do gather along the shore before washing inland—hundreds of companies, from Gigmor, a “LinkedIn for musicians” in Santa Monica, south to “Uber for trucking” Cargomatic near the Venice fishing pier, then running out southeast along Abbot Kinney and down Lincoln, picking up again in clusters in El Segundo, Manhattan Beach, Hermosa, Redondo. Everything: video sites, data storage, record keeping, wine disruptors, marketing solutions, commerce sites, agile software, fixed-gear bicycles, bespoke pornography, mobility, and a bunch of other potential LinkedIns and Ubers for fields not yet dominated. The wave curves northeast from Santa Monica along Sunset Boulevard, spilling down Wilshire and along the 101 into the San Fernando Valley, pooling in the ancient industrial spaces of downtown and perpetually renewing in the technological reservoir of Pasadena. Eleven hundred start-ups—1,600 companies total when you consider investors, consultants, incubators, and accelerators.

The geographic spread of L.A.’s tech sector means less communication among the various nodes than you might observe Up There, but this may be better for the culture: It prevents a certain insular mind-set that can run rampant in the Bay Area. To be fair, it’s pretty geographically spread out Up There, too, but Up There is a monoculture. Business, civics, nightlife, and cost of living orbit the massively powerful tech industry. Tech employees (coders, marketers, and others) sort of work for one ur-corp. Everybody pays well, offers ridiculous benefits, and installs free cafés on odd-numbered floors. Up There people carry different badges and step off at different BART stops, but they’re always going to work at Tech.

Engineers provide the programming backbone of businesses that live on Web and mobile. Despite the “Silicon” spin-offs around the country, Silicon Valley has been their Hollywood—the primary driver and the place with the most sex appeal. The Bay Area flaunts its abundance; in case of failure, there are always other places in town to go, and they generally pay better than Down Here.

The irony is that many of the engineers receive their training in L.A. “We graduate more engineers than anywhere else in the country,” says Suster, “and we have more top-25 engineering universities in our greater vicinity than anywhere else in the country.” Local companies want to hire local engineers, but some founders tell me that they are frustrated by the northward suck of talent to better-paying, more prestigious jobs Up There.

Watch what’ll happen, though: The more businesses that originate in L.A., the safer the bet to stay in L.A. as their growing numbers make fertile ground for more businesses to form, and so on. It’s predicted to become a self-reinforcing system fed not just by the…..