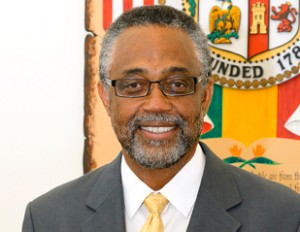 Councilman Curren D. Price Jr. became the 17th person elected to the Los Angeles City Council representing the 9th Council District.
His primary focus for the 9th is improving the quality of life for all residents in the district. This includes community beautification, safety, economic development, and youth empowerment. On the City Council he chairs the Economic Development Committee, and also serves on Housing, Public Works, the Arts and Parks Committees.
His previous public experience includes service in the California Legislature representing the state’s 26th Senate District and representing the 51st Assembly District. Mr. Price’s State Legislative committee assignments included Chair of Senate Committee on Business, Professions, and Economic Development; and Chair of Assembly Government Organizations committee. He also served as Chair of The California Legislative Black Caucus (CLBC) where he helped increase the number of African American State Legislators to nine, the highest number since the CLBC was founded in 1967. In the Legislature, Councilman Price earned a reputation as a thoughtful, principled, effective leader, and a champion for workers, small businesses and innovation.
Born and raised in Los Angeles, Price attended school in the 9th district before his family moved to Inglewood. There he graduated from Morningside High, and earned a scholarship to Stanford University where he graduated with a Bachelor of Arts degree in Political Science. He later graduated with a Juris Doctor degree from the University of Santa Clara, School of Law.
Throughout his tenure as a public official, Curren D. Price, Jr. has received numerous honors in recognition of his legislation and advocacy on behalf of students, working families, small businesses, the arts and international trade. In 2012he received the “Peace Leadership Award” by the Center for African Peace and Conflict. And since 2007, he has been recognized as “Legislator of the Year” by various groups and organizations including the University of California Student Association, the West Basin Municipal Water District, Southern California Apartment Owners Association, California Communications Association, California Physical Therapy Association and the California Small Business Association.
The boundaries of the New 9th consist of L.A. Live on the North, Normandie Ave on the West, 95th street on the South and Alameda on the East. The district includes: Staples Center, L.A. Mart, USC, Orthopedic Institute for Children, the Coliseum, and Exposition Park with its world-class museums, sport facilities, recreational areas, Science Center and the Rose Garden.