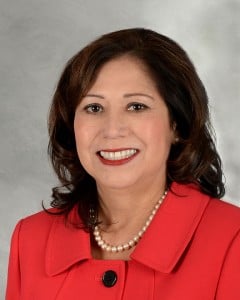 Supervisor Hilda L. Solis was sworn in as Los Angeles County Supervisor for the First District of Los Angeles County on December 1, 2014. Prior to becoming Supervisor she served as Secretary of Labor. Supervisor Solis was confirmed on February 24, 2009, becoming the first Latina to serve in the United States Cabinet. Before that, Supervisor Solis represented the 32nd Congressional District in California, a position she held from 2001 to 2009.
In the Congress, Supervisor Solis’ priorities included expanding access to affordable health care, protecting the environment, and improving the lives of working families. A recognized leader on clean energy jobs, she authored the Green Jobs Act which provided funding for “green” collar job training for veterans, displaced workers, at risk youth, and individuals in families under 200 percent of the federal poverty line.
In 2007, Supervisor Solis was appointed to the Commission on Security and Cooperation in Europe (the Helsinki Commission), as well as the Mexico — United States Interparliamentary Group. In June 2007, Solis was elected Vice Chair of the Helsinki Commission’s General Committee on Democracy, Human Rights and Humanitarian Questions. She was the only U.S. elected official to serve on this Committee.
A nationally recognized leader on the environment, Supervisor Solis became the first woman to receive the John F. Kennedy Profile in Courage Award in 2000 for her pioneering work on environmental justice issues. Her California environmental justice legislation, enacted in 1999, was the first of its kind in the nation to become law.
Supervisor Solis graduated from California State Polytechnic University, Pomona, and earned a Master of Public Administration from the University of Southern California. A former federal employee, she worked in the Carter White House Office of Hispanic Affairs and was later appointed as a management analyst with the Office of Management and Budget in the Civil Rights Division.