To learn more about the Best Practices in Film Regulations and Policies, please download the PDF here.

To learn more about the Model Filming Ordinance, please download the PDF here.

Additional Resources: What They are Saying | Film Friendliness Infographics

In early 2012, the LAEDC’s State & Local Policy Working Group, FilmL.A., the California Film Commission, and a number of other stakeholders undertook an effort to protect and grow Los Angeles County’s film industry through a film friendliness initiative geared toward ensuring that L.A. County remains welcoming to and increasingly supportive of filming activities and the jobs and revenue those activities generate.

On May 1, 2012, the film friendliness initiative took a giant step forward as the California Film Commission Board adopted a revised Model Film Ordinance and newly-created Best Practices, setting forth standards on what being “film friendly” entails. Several members of the LAEDC (e.g., major studios, cities, organizations, and private sector companies) provided valuable input on the Model Film Ordinance and Best Practices, helping shape both documents into what was ultimately adopted on May 1st.

As the Entertainment Capital of the World, we can and should do more throughout the region to provide an environment that is welcoming to filming. Our signature industry creates much-needed jobs for the people of our communities. In fact, in 2011 the Motion Pictures/Video Industries alone supported 117,841 payroll employees in L.A. County. Despite the industry’s importance to our local economy, as a region, we are losing more and more film and television productions to other states and counties who are competing aggressively to lure our signature industry. And they are becoming more successful; the film friendliness initiative aims to bring filming back to L.A. County and the whole Southern California region through the creation, adoption and implementation of more uniform, business-friendly practices and policies to help us attract, grow and retain this critical industry.

To-date, the following entities have moved forward on the film friendliness initiative:

Several cities throughout Los Angeles County are currently in the process of changing their policies to become more film friendly and this list will be updated regularly to reflect these positive changes.

If you are a city that has made recent changes and would like to be added to this list or to learn more about the film friendliness initiative, please contact David Flaks, Chief Operating Officer at the LAEDC via email at [email protected]. 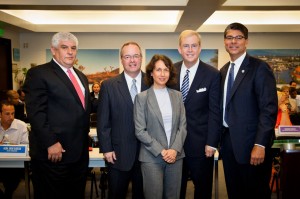