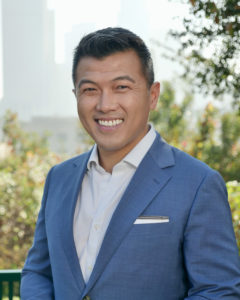 Stephen Cheung is the Chief Operating Officer (COO) of LAEDC and the President of World Trade Center Los Angeles (WTCLA).  In his role as COO, he brings together the capabilities of LAEDC’s mission-delivery department areas, including: Business Assistance and Industry Cluster Development; LAEDC’s Institute for Applied Economics; Communications & Marketing; and Public Policy, into a single team that delivers the LAEDC’s critically important, public-benefit mission.

Cheung also leads investment attraction to the LA County region on behalf of both LAEDC and WTCLA, and facilitates successful location of new businesses, projects, and deals from both international and U.S. investors into the region.  He also leads the team that supports international trade and international connections for organizations based in LA County.

In 2020, Stephen Cheung was elevated to COO after serving as Executive Vice President of LAEDC, and continues in his concurrent role as President of World Trade Center Los Angeles, a title he has held since coming to the organization in 2014.  Prior to that, Cheung was the Secretary General of International Trade and Foreign Affairs for Los Angeles Mayor Eric Garcetti, and was responsible for managing policies and programs related to the Port of Los Angeles, Los Angeles World Airports, International Affairs and Global Trade. In this role, he was the lead organizer for Mayor Garcetti’s previous international trade missions to Mexico, China, Korea and Japan.  Furthermore, Cheung implemented the city’s strategic plan to make Los Angeles a global capital of clean technology by building the infrastructure to support research, development and manufacturing with key partners.

Stephen was born in Hong Kong and grew up in Los Angeles where he received both his Bachelor of Arts in Psychobiology and Master of Arts in Social Welfare from UCLA. He is fluent in both Mandarin and Cantonese.