By Mariah AdedejiSeptember 5, 2018 No Comments

Assembly Bill (AB) 2853 would force local agencies to issue redundant and excessive reports, with highly sensitive disclosures in some cases, for an economic development subsidy for a warehouse distribution center.

The Los Angeles County Economic Development Corporation (LAEDC), an organization whose purpose is to collectively advance opportunity and prosperity for all, strongly opposes and respectfully urges you to veto Assembly Bill (AB) 2853, which would force local agencies (e.g., city or county) to issue redundant and excessive
reports, with highly sensitive disclosures in some cases, prior to and every year after an award of an economic development subsidy for a warehouse distribution center.

Under existing law, local agencies are already required to provide certain information to the public before approving an economic development subsidy, as defined as any expenditure of public funds or loss of revenue to a local agency in the amount of $100,000 or more, within its jurisdiction. So, we’re confused as to why a separate law is necessary to single out and needlessly expand the current law as it applies to warehouse distribution centers, which we believe would greatly overburden local agencies, negatively impact economic activity – along with job and wage growth – in our state’s trade and logistics industry, and impede economic development writ large across the state.

Most obviously AB 2853 is in direct response, or perhaps retaliation, to the number of Amazon distribution centers opening up across the state and the choice by certain local jurisdictions to use available incentives to entice the company’s location decisions. Unfortunately, it would almost certainly have chilling and deterring effects on the
decision of Amazon, as well as other firms and industries that utilize and depend on warehouse distribution centers in their supply chains, when deciding whether to locate and hire workers here in California, versus let’s say right across the border in Nevada or Arizona. Moreover, this bill also comes at a time when Amazon is actively considering California (Los Angeles) for its second headquarters (aka “HQ2”) – a collaborative effort in which your own Office of Business and Economic Development is actively participating and involved. AB 2853 would certainly be the wrong message to send to Amazon at this critical juncture in its HQ2 decision‐making process.

Worse, AB 2853 is really bad public policy. It represents a gross overreach by state government on local agencies’ freedom to deploy local economic tools readily, facilely and quickly, hampering local economic development efforts needlessly with highly prescriptive and unconstructive requirements when these localities are simply trying to bring more businesses and jobs into their communities. On its face, AB 2853 neither achieves a compelling government interest, which according to the bill’s sponsor is to provide “more information [to] collectively bargain for a warehouse,”1 nor is it the least restrictive means for achieving the stated government objective “to hold warehouse
and distribution companies that receive public subsidies accountable for good job creation,”2 as AB 2853 disclosures would require firms to divulge confidential competitive information such as: annual revenue generated, the success (or not) of a center, and employee arbitration agreements signed, which could put firms at a competitive disadvantage.

The fact is that here in Southern California, warehouse distribution centers are an integral part of our world‐leading trade and logistics industry, which supports more than 580,000 workers, generates about $225 billion in economic activity, and moves about 600 million tons of freight annually valued at $1.7 trillion throughout region across various modes of transportation, trade infrastructure and goods movement conveyances. 3 Distribution networks and centers are critical to providing businesses with parts and materials needed for successful operations as well as supplying products to local consumer markets that are then retailed to satisfy their demand. Distribution centers also provide tax revenue to all levels of government and a diverse array of jobs for residents with varying levels of education, skills and wages. And while the bill’s author laments the increasing use of automation and robots in this arena, these warehousing and distribution centers still provide significant and upwardly mobile employment opportunities, supporting more than 60,000 jobs at an average wage of close to $45,000, for residents in the Southern California region.4

In sum, with fewer economic development incentives available, local agencies must have the discretion to use their available incentives freely and uncomplicatedly. AB 2853 needlessly imposes onerous requirements that would only serve to postpone, frustrate and/or foil the efforts of local jurisdictions to attract distribution‐related projects, firms, jobs and economic activity.

For all of the above reasons, the LAEDC strongly opposes AB 2853 and urges you to veto AB 2853. 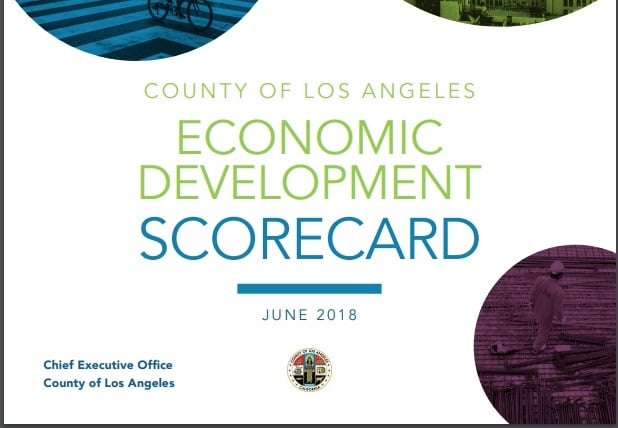