On March 20th, 2017, the Los Angeles County Economic Development Corporation’s (LAEDC) Southern California Aerospace Council will launch the region’s first-ever “Southern California Aerospace Days.” The purpose of the four-day mobilization is to highlight and advocate for the interests of the region’s Aerospace & Defense (A&D) industries as a major driver of high-wage job generation across all skill and education levels, from skilled machinists and technicians all the way to the designers, engineers and scientists who will develop and commercialize the next-generation of innovative products, systems and technologies. The activity of this talented workforce, in combination with our region’s key Aerospace assets, supports Southern California’s economy and keeps the region at the forefront of global aerospace leadership. 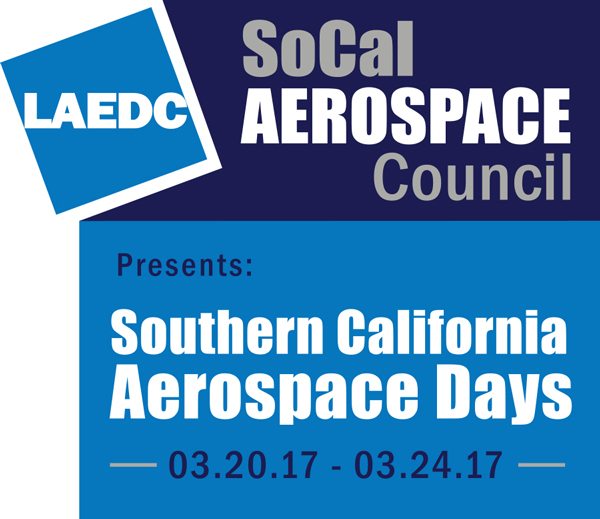 Throughout the week of March 20-24, the Council and its industry, military and research partners will feature advocacy meetings with elected leaders, networking receptions and “open houses” with cutting edge firms, an Aerospace startup “pitch” event, and the introduction of various resolutions and other public actions taken by governmental bodies on behalf of the industry. Most importantly, the week will bring A&D industry leaders throughout Southern California together with their political representatives to discuss and garner support for issues critical to the continued growth and  success of our region’s Aerospace industries and firms.

Regional advocacy efforts will be almost immediately followed by “Sacramento Aerospace Days” the week of March 27, where hundreds of Southern California-based Aerospace leaders and advocates will converge on Sacramento to carry our region’s Aerospace-related demands to legislators and rulemaking agencies in the state capitol.

To host an event, such as a roundtable, open house or reception; to attend a legislative meeting (in Southern California or in Sacramento); or to promulgate your own resolution or support letter, please contact the LAEDC’s Aerospace & Defense Cluster Development Dept at 213.236.4852, or via email at [email protected]

About the LAEDC SoCal Aerospace Council

The Southern California Aerospace Council supports and builds the most competitive aerospace, defense, space and adjacent/enabling technology community in the world, growing businesses and fostering job creation.  With over 400 active participants from industry, labor, government, not-for-profit, and education,  the Council exists to defend southern California’s status as the aerospace capitol of the world, protecting and strengthening aerospace and defense industries, firms, suppliers, and workers currently present in our region, as well as positioning the Southern California mega-region to be the world’s hub for emerging sectors, technologies and occupations that will drive the industry in the future.   Industry cluster development efforts focus on business development, technology innovation and policy input to ensure the voice of local industry is heard. Participants include elected officials, prime contractors and suppliers, labor organizations, research institutions, government aerospace organizations, education and workforce development organizations.   www.laedc.org/ SCAC

Los Angeles County Economic Development Corporation (LAEDC) is focused on raising standards of living for residents of L.A. County by increasing economic opportunity and regional prosperity.  Through collaborative economic development leadership, LAEDC promotes a globally competitive, prosperous and growing L.A. County economy to improve the health and wellbeing of its residents and communities and enable those residents to meet their basic human need for a job.  Offering objective economic research and analysis, strategic assistance to government and business, and targeted public policy, LAEDC is guided and supported by the expertise and counsel of its business, government and education members and partners. LAEDC was established in 1981 as a private, non-profit, public benefit corporation.    www.laedc.org