May State and Local Employment Report

The Employment Development Department (EDD) released the state and local employment reports for the month of May. Total California nonfarm employment increased by 15,200 jobs over the month in seasonally adjusted terms. Additionally, the April increase, originally reported at 59,600 jobs, was revised up to 70,000. The May year-over-year change showed an increase of 440,300 jobs (SA). This equated to a growth rate of 2.8 percent, exceeding the national growth rate of 1.7 percent. California’s private sector added 391,900 jobs, also increasing by 2.8 percent over the year, while employment in the public sector rose by 2.4 percent (58,400 jobs). 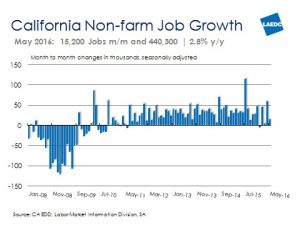 Employment growth continued across most industry sectors in May, with nine of the 11 super-sectors adding jobs over the year: construction; trade, transportation and utilities; information; financial activities; professional and business services; educational and health services; leisure and hospitality; other services and government for a combined gain of 456,200 jobs. For the third consecutive month, educational and health services posted the largest gain on a numerical basis, adding 102,000 jobs (up by 4.2 percent), while construction once again claimed the largest gain in percentage terms, increasing by 5.5 percent and adding 39,600 jobs.

California’s unemployment rate declined again over the month, falling from 5.3 percent in April to 5.2 percent in May, further narrowing the gap between the state unemployment rate and the national rate of 4.7 percent. The May unemployment rate was the lowest since May of 2007 when it was also 5.2 percent. The number of employed persons now stands at new record high of nearly 18.1 million (an increase of 1.9 percent over the year), while the number of unemployed workers continues to fall, declining by 17.3 percent over the year to 994,500 workers. This is the first time since August 2007 that the number of unemployed in California has dipped below one million. California’s labor force also grew over the year, increasing by 0.7 percent to 19.1 million workers. 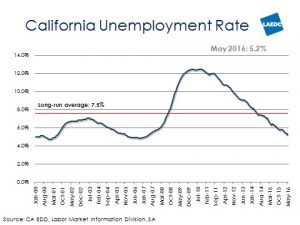 Private education and health services posted the largest year-over-year increase, adding 37,200 jobs. Most of the gain was concentrated in health care (up by 28,300 jobs), while educational services added 8,900 jobs to the total. The number of leisure and hospitality jobs increased by 21,000, while trade, transportation and utilities expanded by 13,200 jobs. Manufacturing employment was down by 7,600 jobs over the year, while mining and logging shed 500 jobs.

The total number of containers handled at the ports of Los Angeles and Long Beach in May increased by 6.1 percent on a year-over-year basis to 1.4 million TEUs (twenty-foot equivalent units). Total containers at the Port of Los Angeles were up by 10.9 percent, while volumes at the Port of Long Beach edged up by just 0.8 percent in May when compared to last year. Year-to-year comparisons are a bit tricky right now because last year at this time both ports were still busy catching up after several months of congestion. In spite of the very slight uptick in the year-over-year figure at the Port of Long Beach, May 2016 was the second busiest for the month of May in the port’s 105 year history. The Port of Los Angeles had its busiest May ever in its 109 years of operation. 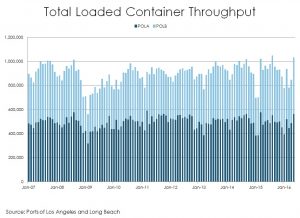 Exports(loaded outbound traffic, excluding empties) at the Port of Los Angeles were up moderately, increasing by 6.3 percent from 152,917 TEUs in May 2015 to 162,487 loaded outbound TEUs in May 2016. Exports at the Port of Long Beach edged by 2.0 percent in May with a reported 138,594 loaded outbound TEUs, up from 135,855 in May 2015. Overall, the San Pedro Bay ports experienced a year-over-year increase of 4.3 percent in export container volumes, an indication that weakening of the U.S. Dollar in recent weeks is contributing to stronger export volumes.

Year-to-date, total container volume surpassed the same period in 2015 by 4.0 percent. Volumes were down slightly at Long Beach (-1.5 percent) while Los Angeles saw an increase of 8.7 percent. (Kimberly Ritter-Martinez)

Another Good Month for Retail Sales

Seasonally adjusted U.S. retail and food services sales in May rose by 0.5 percent after surging by 1.3 percent in April. Excluding sales of automobiles, gasoline, and building supply centers, to arrive at core retail sales, the increase was 0.3 percent. 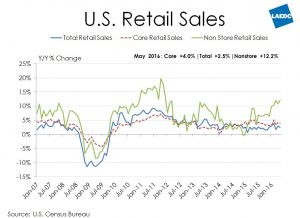 Nine of the thirteen major retail sales categories posted gains over the month in May. Motor vehicles and parts were up by 0.5 percent; electronics and appliance stores increased by 0.3 percent, while sales at food and beverage stores advanced by 0.5 percent. Meanwhile, many Americans continue to enjoy a night out at a restaurant – sales at food services and drinking places moved higher by 0.8 percent in May.

Health and personal care stores also posted a robust increase (0.6 percent). With consumers filling out their spring and summer wardrobes, clothing and accessories stores saw their sales rise by 0.8 percent, while sales at sporting goods, hobby, book and music stores jumped by 1.3 percent. Nonstore retailers (mainly e-commerce, but also catalogs and vending machines) recorded an increase of 1.3 percent as well. Sales at gasoline stations were up by 2.1 percent, lifted by higher prices. This was the third consecutive uptick in fuel prices, but so far, consumers have readily absorbed higher prices at the pump.

On a year-over-year basis, total retail sales in May were up by 2.5 percent. Most major sectors continue to report year-over gains with the exception of electronics and appliances stores (-3.1 percent) and gasoline stations (-9.5 percent). Clothing and accessories stores were down by 0.5% over the year. The strongest year-over-year growth occurred at nonstore retailers, up by 12.2 percent; health and personal care stores (8.3 percent); and foods services and drinking places (6.5 percent).

Please join us for the 28th Annual Southern California Visitor Industry Outlook Conference to be held at Embassy Suites LAX North Hotel . Hear from noted experts, representing a range of travel sectors, offer their best assessment of the southern California economic situation and how it may affect your business. All attendees receive an electronic link of CBRE Hotel’s 2017 Lodging Forecast and will be able to enjoy a continental breakfast buffet before the conference begins.

The Eddy Awards annual dinner gala and awards ceremony celebrates exceptional public and private leadership in LA County economic development, with the Most Business-Friendly City Award and recognition of honorees that demonstrate outstanding contributions to economic development in the region. It is an extraordinary opportunity to network with leaders from all sectors in the region. Join us Thursday, November 10th, 2016 at the Beverly Hilton.

This is LAEDC’s only fundraiser and your sponsorship make our work possible. LAEDC is the only organization in Southern California focused on a comprehensive approach to raising standards of living, which includes fostering job creation in our leading industry clusters and ensuring our residents can access those job opportunities. LAEDC’s initiatives, including the Strategic Plan for Economic Development, address the root causes of poverty and income inequality, and set a foundation for widely shared prosperity. Sponsor the Eddy Awards, and associate your organization’s name with this transformative progress. 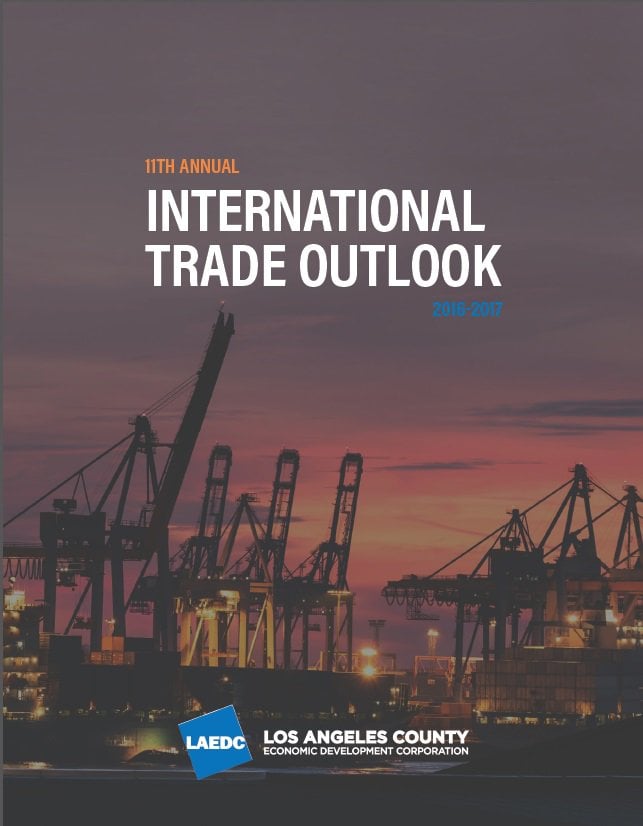