LA must build its share of foreign investment: Guest commentary 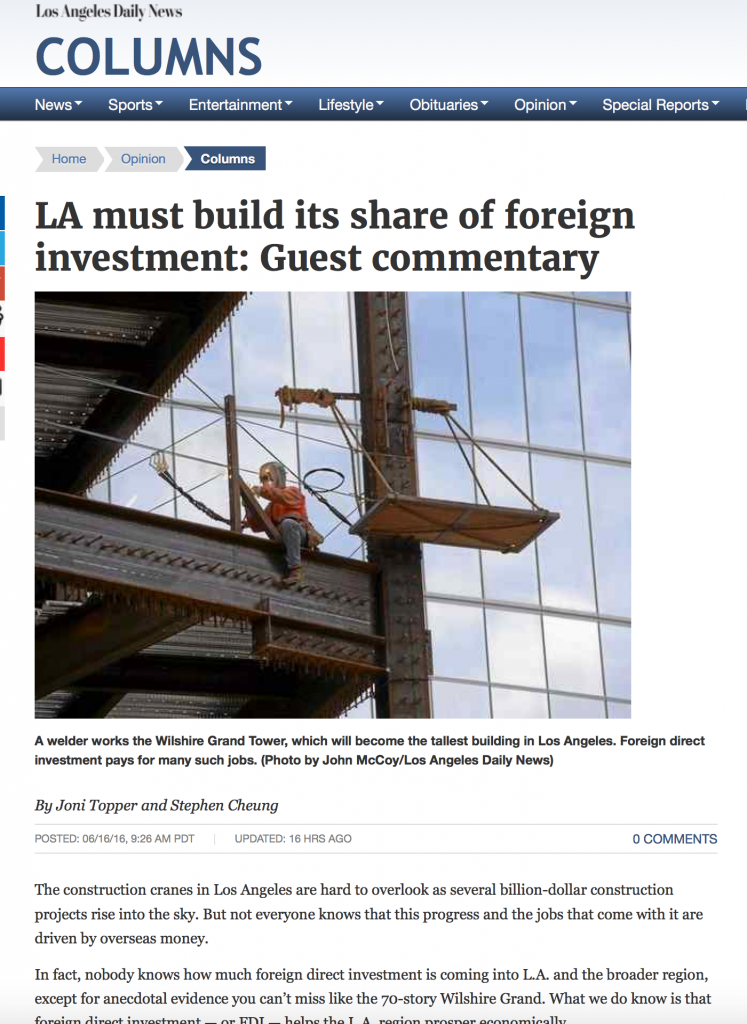 Joni Topper of JPMorgan Chase and Stephen Cheung of WTCLA shared thoughts on FDI in an opinion article published June 17 in Los Angeles Daily News, Daily Breeze and Long Beach PressTelegram.  Read the article at this link, or below:

LA must build its share of foreign investment: Guest commentary

By Joni Topper and Stephen Cheung

The construction cranes in Los Angeles are hard to overlook as several billion-dollar construction projects rise into the sky. But not everyone knows that this progress and the jobs that come with it are driven by overseas money.

For every visible project, there are thousands of small and medium-size businesses in L.A. that are here because of FDI, and those businesses create good jobs.

But if we don’t recognize the importance of FDI, and don’t aggressively act to attract overseas investors, there are plenty of other cities in the nation and in the world that will take those jobs. Are we competing for the next investment?

While anecdotal evidence suggests our region might be among the top recipients for FDI in the nation, we risk losing that economic engine unless we support organizations and efforts to tell L.A.’s story and meet with these investors to attract new projects and firms.

In 2013, the Global Cities Initiative, a joint project of the Brookings Institution and JPMorgan Chase, launched a first of its kind analysis of the jobs supported by FDI, and helped reshape the narrative of foreign ownership as something that can be highly beneficial for communities. For example, we know from the Global Cities research that foreign owned entities:

• Tend to be more concentrated in high-value, advanced industries, which are the jobs our community wants.

• Account for 19 percent of all research and development in the U.S.

Now it’s time to look more closely at the role of FDI in Los Angeles. What types of investment are shaping our economy, like affordable housing, hotels near our convention center, or infrastructure to make our region more resilient? How many jobs rely on this source of activity?

The answers are coming as World Trade Center L.A. and the Los Angeles County Economic Development Corporation prepare to release the first FDI study for the region in nearly a decade. Good timing too, because foreign investors will be eyeing that report when they stop in L.A. for the upcoming SELECT LA Investment Summit on their way to Washington, D.C., where they will be hearing pitches from all the other cities and states in the nation.

As Angelenos, we can’t rest our hats on one event. Thousands of jobs in our region require sustained efforts to remain a world leader in attracting foreign direct investment.