The U.S. Labor Market Report covering the national employment situation in May showed a gain of just 38,000 nonfarm jobs. The unemployment rated fell to 4.7 percent, but that was primarily due to a drop in labor force participation. The average workweek was unchanged for the second month in a row at 34.4 hours but the average hourly wage increased by five cents to $25.59 following an increase of nine cents in April. Over the year, average hourly earnings were up by 2.5 percent.

The employer payroll survey reported that total nonfarm employment in the United States increased by 38,000 jobs in May, falling far short of expectations and taking many economists by surprise. There were also significant downward revisions to the March and April job counts resulting employment gains that were 59,000 less than previously reported. Year-to-date job gains have averaged 150,000 per month versus 181,000 during the same period last year. 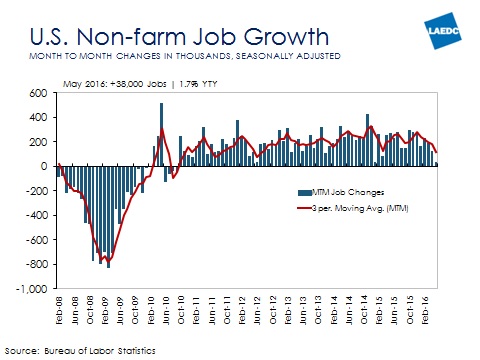 The industries that posted the largest gains over the month were health care services (55,400 jobs); professional and technical services (25,800 jobs); educational services (11,700 jobs); retail trade (11,400 jobs); and leisure and hospitality (11,000 jobs). In addition to declines in the goods producing sectors, information employment fell by 34,000 jobs, administrative and waste services jobs were down by 11,800 and wholesale trade fell by 10,300. 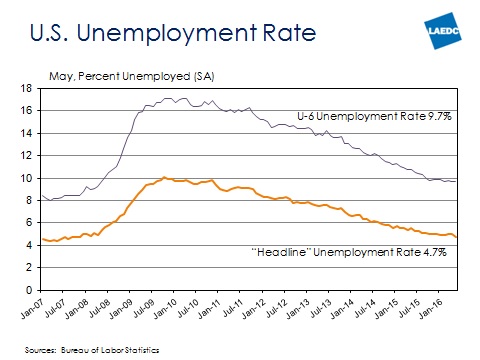 There was some good news in the report. The number of individuals out of work six months or longer fell by 178,000 over the month and by 606,000 over the year. The long-term unemployed now constituted 25.1 percent of all unemployed persons. The average share going back to 2000 is 26.1 percent. The growth rate of the average hourly wage also accelerated slightly, with an average annual gain of 2.44 percent year-to-date versus 2.18 percent for the same period last year. 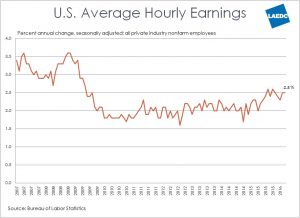 Summary: The employment numbers for May were pretty dismal, which was surprising given the string of positive economic indicators released this week. Normally, we would take a wait-and-see attitude about not reading too much into a single month, but when accompanied by the downward revisions in March and April the overall effect is unsettling and will likely result in the Fed holding off in a June interest rate hike. (Kimberly Ritter-Martinez)

U.S. Vehicle Sales Fail to Rebound in May

U.S. light vehicle sales slowed in May, declining by 1.5 percent over the year to 17.4 million units. The May selling pace was below the year ago rate of 17.6 million units and was only the second decline in year-over-year sales recorded since the first quarter of 2014. Compared with April, sales were virtually unchanged, edging up by 0.2%. On a per unit volume basis, approximately 1.53 million vehicles were sold last month, a 6.1% decline compared with year ago levels (IHS Global Insight). 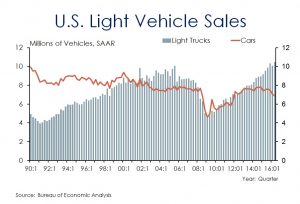 Total passenger car sales, including foreign and domestic models, fell by 11.6 percent over the year to 6.9 million units. This was the slowest sales pace for passenger cars since late 2011. Sales of passenger cars have fallen in 14 of the past 16 months on a year-over-year basis.

Light trucks, SUVs and cross over utility vehicles continue to outpace sales of passenger cars. Sales were up by 6.6% over the year in May to 10.5 million units, accounting for 60.2% of the sales mix last month.

Sales of medium-heavy trucks, which are typically used by businesses for hauling freight and making deliveries, declined by 5.2 percent over the year in May to 435,000 vehicles.

Automobile sales have supported retail sales and real consumer spending growth for the past several years, while auto manufacturing has contributed to GDP growth. While the environment for car and truck sales remains favorable, new vehicle sales, after peaking at 18.1 million units last October, may be leveling off. On the one hand, interest rates and unemployment are low. Strong job and income growth will also continue to support demand for new vehicles. New car loans remain relatively easy to obtain and delinquency rates are low. However, the peak sales levels we saw late last year were not sustainable. Sales should average about 17.1 units through the remaining months of this year. Still a robust pace, supportive of consumer spending, but more reflective of where we are in this economic cycle. (Kimberly Ritter-Martinez)

The U.S Commerce Department reported that while both imports and exports were up in April, imports rose more than exports, leading to an increase in the U.S. trade deficit. The April deficit of $37.4 billion was up $1.9 billion from $35.5 billion (revised) in March, which was the smallest trade gap since December 2013. The increase in the April deficit was the result of an increase in the goods deficit of $1.4 billion and a decline in the services surplus of $0.5 billion. Year-to-date, the deficit was 4.8 percent ($8.1 billion) less than the same period in 2015.

U.S. exports increased by $2.6 billion to $182.8 billion in March, while imports rose by $4.5 billion to $220.2 billion. Gains on the export side of the ledger were led by an increase in exports of industrial supplies and materials (in part due to higher commodity prices); capital goods, consumer goods and automotive vehicles and parts. Over the last year, export growth has been pulled lower by sluggish economic growth among America’s major trading partners and the high value of the U.S. Dollar. However, the strong rebound last month suggests trade may boost economic growth in the second quarter. As to imports, the sharp increase in April was due to a rebound in oil prices that helped to push up the value of petroleum imports. Elsewhere, imports of automotive vehicles and parts and consumer goods also rose along with imports of capital goods.

The U.S. bilateral trade deficit with China, the largest trade deficit between the U.S. and any other country, increased in April, rising from $20.9 billion in March to $24.3 billion in April (not seasonally adjusted). However, compared with the year ago deficit of $26.8 billion, the April 2016 figure was down by 9.3 percent. The U.S. also ran trade deficits with most of its other major trading partners, including Canada, Mexico, Japan, the European Union and German.

This report also reflected revisions to the data going back to 2013 that showed smaller deficits – the nation’s trade gap was 7.3% lower in 2015 than originally reported, while the 2014 deficit was revised down by 3.6 percent and the 2013 deficit by 3.5 percent.

Bottom Line: The U.S. trade deficit increased in April, reflecting current weakness in global trade and the relatively high value of the dollar. Although trade has been a drag on U.S. growth in five of the last six quarters, the U.S. still holds a relatively strong economic position and, with consumer spending driving the current expansion, expectations are for increased import demand accompanied by an increase in exports as the dollar stabilizes. (Kimberly Ritter-Martinez)