The Economic Well-Being of U.S. Households

The Federal Reserve has released the 2016 edition of a survey-based report that examines the economic well-being of American households. This year’s report is the third in a series that focuses on how individuals and their families are faring financially. In addition to looking at overall well-being, the survey covers a range of topics including income and saving behaviors, economic preparedness, access to banking and credit, housing decisions, car purchases and auto lending, education and human capital, student loans and retirement planning.

Although extensive in scope, here are a few of the key findings in this year’s report:

On the whole, last year the financial health of American families showed moderate improvement relative to 2014 and 2013. The employment outlook is brighter and more workers reported feeling confident they had the skills to get the kind of job they wanted (77% last year versus 67% in 2013). However, many families still find themselves in a precarious position, at risk for financial disruption because of income volatility, low saving rates and low rates of educational attainment. (Kimberly Ritter-Martinez)

Source: Report on the Economic Well-Being of U.S. Households in 2015

According to the Bureau of Labor Statistics, 11 states saw increases in total nonfarm employment over the month in April, while employment in 33 states was essentially unchanged. Six states saw payrolls decline. The largest job gains were in California (+ 59,600) and Florida (+31,100). The steepest declines occurred in Pennsylvania (-16,900) and Ohio (-13,500). 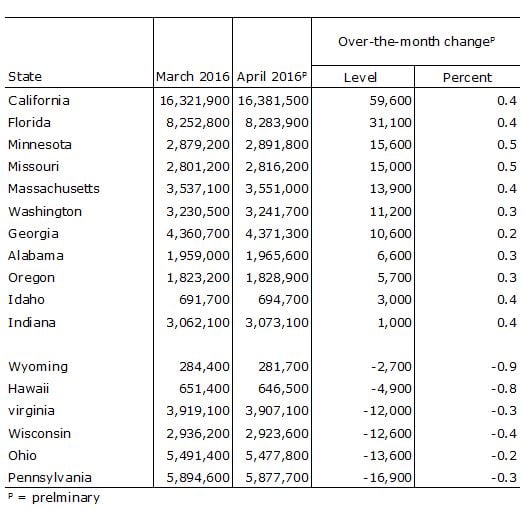 Over the year, nonfarm payroll employment increased in 37 states, while two states lost jobs and 11 were virtually unchanged. Although April saw six fewer states adding jobs compared with March, there were also four fewer states that experienced a decline. Over the year in April, the strongest job growth was again in California (+450,200) and Florida (+254,500), with Texas coming in third with a gain of 189,600 jobs.

South Dakota and New Hampshire had the lowest unemployment rates in April, 2.5 percent and 2.6 percent respectively. The highest unemployment rates were recorded in Alaska and Illinois, both at 6.6%. There were ten states in which the unemployment rate fell in April, while four states suffered notable rate increases. Over the year, 19 states posted unemployment rate declines. The only significant over-the year rate increases were in Wyoming (+1.4 percentage points) and North Dakota (+0.5 point) both states hit hard by the downturn in coal (Wyoming) and low oil prices (North Dakota). In these states and other “energy” states, a decline in the mining and natural resource sectors is spilling over into broader state economy, causing a slow down in the manufacturing, construction and trade sectors.

According to the Bureau of Labor Statistics, in 2015 there were 26.3 million foreign-born workers in the U.S. civilian labor force, or 16.7 percent of the total. The Pacific states had the highest share of foreign born workers at 28.1 percent, followed by the mid-Atlantic states (21.2 percent) and the West South Central states at 17.7%. 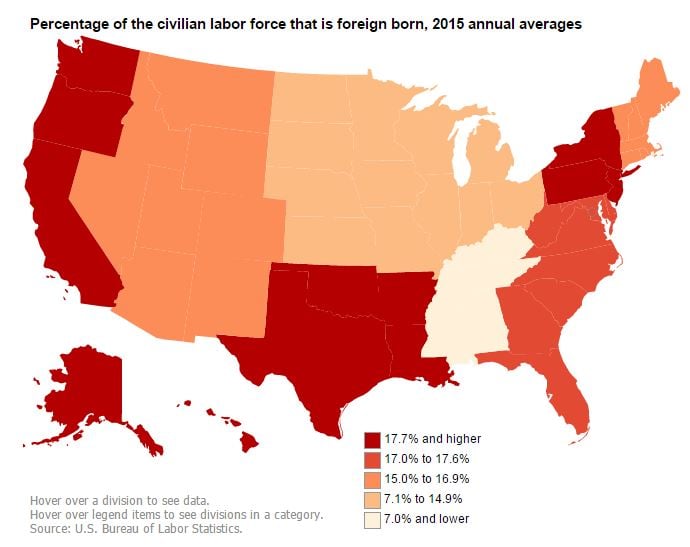 Home sales in Southern California declined over the year in April, falling by 3.2 percent to 21,312 units (new and resale houses and condominiums). This was only the second time in the last 12 months that sales fell on a year-over-year basis. The April sales figure was 10.5 percent below the average for that month going back to 1988 when this data series began. A closer look at the April sales number shows a marked difference in sales of newly constructed homes versus sales of existing homes: new home sales were 43 percent below average for the month of April, while sales of existing homes were off by just 6.3 percent. Year-to-date, home sales in Southern California are up by just under three percent over the same period last year. The demand is there, fueled by job growth, household formation and low interest rates, but low inventories, credit constraints and affordability continue to keep a lid on sales.

The median price across Southern California rose a little faster last month, increasing by 6.8 percent over the year to $458,000 after posting a gain of 5.6 percent in March, and was the highest for any month since the median price was $462,000 in September 2007, nearly 10 years ago. The median home price in Southern California has know risen for 49 consecutive months on a year-over-year basis and is closing in on the peak median of $505,000 reached in mid-2007. Orange County matched its prerecession peak price last month, while Los Angeles and San Diego counties are now within 5.5 percent.

Sales continue to be skewed toward higher-priced homes. This means that the composition of home sales is having an effect on the rise in median price. The share of homes sold in April that were priced above $500,000 was 43.8 percent (the peak share was of 44.4 percent reached in September 2007), up from 39.1 percent a year ago, while the number of home sold for $500,000 or more was up by 3.5 percent. Meanwhile, home sales in the more affordable price ranges (below $500,000) fell by 14.9 percent. (Kimberly Ritter-Martinez)

Real disposable income (adjusted for taxes and inflation) increased by just 0.2 percent primarily because of slightly higher inflation stemming from increases in gasoline prices. On the other hand, real personal consumption expenditures were up by 0.6 percent after remaining unchanged in March. Real spending on goods increased by 1.2 percent, up from 0.4 percent in March, to nearly $4.0 billion, while spending on services rose by 0.4 percent to $7.5 billion.

Inflation is showing signs of firming. Consumer prices edged higher over the month in April (0.3 percent) and were up over the year by 1.1 percent. Excluding food and energy, prices advanced by 1.6 percent.

The 0.5 percent rise in wages and salaries (the second such increase this year) is a sign that labor market conditions are tightening. Consumer spending climbed at a faster pace than incomes in April, and while that led to a pullback in the saving rate for the month, Americans continue to save at a elevated rate suggesting consumers remain cautious in their spending habits. (Kimberly Ritter-Martinez)