The Employment Development Department (EDD) released the state and local employment reports for the month of April. Total California nonfarm employment increased by 59,600 jobs over the month in seasonally adjusted (SA) terms. Additionally, the March increase originally reported as 4,200 was revised up slightly to 5,200. The April year-over-year change showed an increase of 450,200 jobs (SA). This equated to a growth rate of 2.8%, exceeding the national growth rate of 1.9%. California’s private sector added 401,500 jobs (an increase of 3.0%) over the year, while employment in the public sector rose by 2.0% (48,700 jobs). 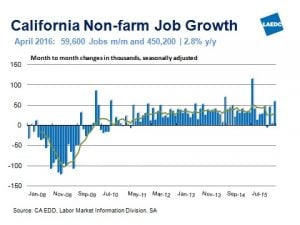 Employment growth continued across most industry sectors in April, with nine of the 11 super-sectors adding jobs over the year: construction; trade, transportation and utilities; information; financial activities; professional and business services; educational and health services; leisure and hospitality; other services and government for a combined gain of 458,500 jobs. For the second consecutive month, educational and health services posted the largest gain on a numerical basis, adding 98,600 jobs (up by 4.1%), while construction continued to claim the largest gain in percentage terms, up by 7.0% and adding 49,800 jobs.

Private education and health services posted the largest year-over-year increase, adding 37,900 jobs. Most of the gain was in health care (up by 28,800 jobs), while educational services added 9,100 jobs to the total. Trade, transportation and utilities payrolls increased by 15,500 jobs, while leisure and hospitalities expanded by 15,000 jobs. Manufacturing employment was down by 6,400 jobs over the year, while mining and logging shed 100 jobs.

Summary: Employment in California and in the Los Angeles five-county region continues to trend up with Los Angeles notably achieving an unemployment rate dipping blow the statewide unemployment rate. Most sectors added jobs over the month in April, while unemployment rates across the region are at their lowest levels since 2006. The year-over-year gains remain on track with impressive job gains in many industries, including health care, professional business services, leisure and hospitality, and construction. (Kimberly Ritter-Martinez)

The California Association of Realtors (CAR) released their April report covering California existing home sales and median prices. The statewide median price rose over the year by 5.1% to $509,100. Although this was the first time in nine years that the median price has been above $500,000, it was still below the peak price of $594,520 reached in May 2007. Compared with March, the median price was up by 5.3%. With demand outpacing supply by a wide margin, housing affordability continues to decline. Many potential buyers are being forced by affordability issues to look further afield to inland regions adjacent to major metro areas and job centers. 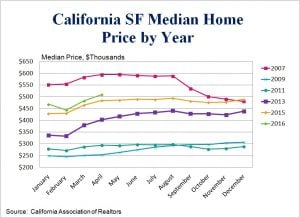 Sales of single-family homes declined by 5.4% over the year in April to 406,800 units (annualized rate, adjusted for seasonality). This was the first year-to-year decline in five months and was the largest drop in sales since August 2004. Hampering home sales are extremely low inventories. The statewide unsold inventory index in April was 3.5 months, down marginally from 3.6 months in March and up only slightly from the year ago supply of 3.4 months. The lack of inventory and competition for what is available in many of California’s coastal employment centers continues to exert strong upward pressure on prices.