By Kimberly Ritter-MartinezMay 16, 2016 No Comments

The State Controller’s office has released the April cash report for the state’s General Fund. Ten months into the fiscal year (2015-2016), total receipts were up by 4.9% to $96.5 billion compared with the same period last year. Total disbursements ($106.4 billion) were up by 4.3%, exceeding cash receipts by $9.9 billion. As of April 20, the state’s cash balance stood at minus $7.3 billion.

Total revenues (receipts from taxes, licenses, fees or investment earnings) increased by 5.4% to $95.1 billion compared with the first 10 months of the previous fiscal year but are running slightly below expectations (-0.7%).

The schedule of cash disbursements in the Controller’s report showed that expenditures on Local K-12 Education were $39.5 billion during the first 10 months of the fiscal year, an increase of 5.1%. Expenditures for Community Colleges rose by 20.8% to $5.0 billion, while the UC and CSU systems received disbursements totaling $5.4 billion, an increase of 6.9% over the previous year.

Spending on health and human services was up by 5.3% over the year to $2.1 billion, while funds allocated to the Department of Corrections increased by 2.1% to $8.2 billion. The amount the state has paid to service its debt obligation so far this year rose by 4.3% to $4.6 billion.

As of April 30, the General Fund had $32.9 billion in unused borrowable resources against $7.3 billion outstanding loans, which are composed entirely of internal borrowing.

The lower-than-expected receipts from personal income taxes in April were a concern. Fiscal year-to-date, revenues are outpacing the previous fiscal year, but April revenues were $215 million lower than the same period a year ago. April is one of the most important months for personal income tax collection, the state’s most important revenue source. It is too early to tell if April was a momentary blip or the start of a longer trend, but peaks and valleys are to be expected with this volatile revenue stream. (Kimberly Ritter-Martinez)

Seasonally adjusted U.S. retail and food services sales in April surged by 1.3% after declining by 0.3% in March. Even excluding autos, retail sales were up by a strong 0.8%.

Automobile sales shifted back into high gear last month, increasing by 3.2%. Because retail sales are not adjusted for price changes, higher prices at the gasoline pump (up by 2.2%) also pushed retail sales higher. Other notable gains were posted by nonstore retailers (2.1%); miscellaneous retailers (1.5%); and apparel stores (1.0%). Elsewhere, more moderate gains occurred at furniture and home furnishings stores (up by 0.7%); electronics and appliances stores (0.5%); food and beverage stores (0.9%); health and personal care stores (0.9%); sporting goods, hobby, book and music stores (0.2%); department stores (0.3%); and at restaurants and bars (0.3%). Only one major retail sales category posted a loss over the month – home improvement centers saw sales slip by 1.0%. 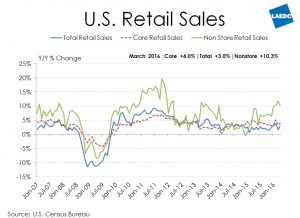 On a year-over-year basis, total retail sales in April were up by 3.0%. Most major sectors continue to report year-over gains with the exception of electronics and appliances stores (-2.0%) and gasoline stations (-9.4%). The strongest growth over the year occurred in: nonstore sales (mainly e-commerce), up by 10.2%; home improvement centers (8.2%); and health and personal care stores (8.1%).

After a weak first quarter, second quarter retail sales were off to a good start in April. This also augers well for personal consumption expenditures, raising expectations for a boost to second quarter GDP growth. (Kimberly Ritter-Martinez)