LAEDC members tour Hyperloop One on eve of major announcement

As Hyperloop Technologies (now named Hyperloop One) prepared major media announcements this week of 5.8.16, LAEDC members were able to take a behind-the-scenes tour (under NDA) of the company’s Downtown Los Angeles innovation campus, where the company is moving quickly to develop and deploy the concept famously introduced by Elon Musk, to move people and containerized cargo at hundreds of miles per hour, in a new mode of transportation.

We can’t talk too much about what we saw…  But let’s just say we did see levitation…and their one-of-a-kind design and testing facilities…and we gained an appreciation for how “real” this new mode of transportation is becoming.  Deployment of a production system seems very likely in the coming years.  A very special thanks to Brogan Bambrogan, Co-Founder and CTO, and Chris Vasquez, Director of Product Engineering at Hyperloop One.  The Los Angeles region continues to gain momentum as a key center for innovation in the field of advanced transportation, with examples ranging from Faraday Future, to Hyperloop, to Virgin Galactic, to BYD…and the list goes on.

LAEDC members on the innovation campus of Hyperloop Technologies 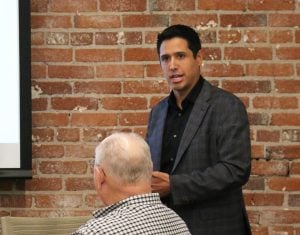 Chris Vasquez, Hyperloop Technologies, presenting to LAEDC members on May 9, 2016.