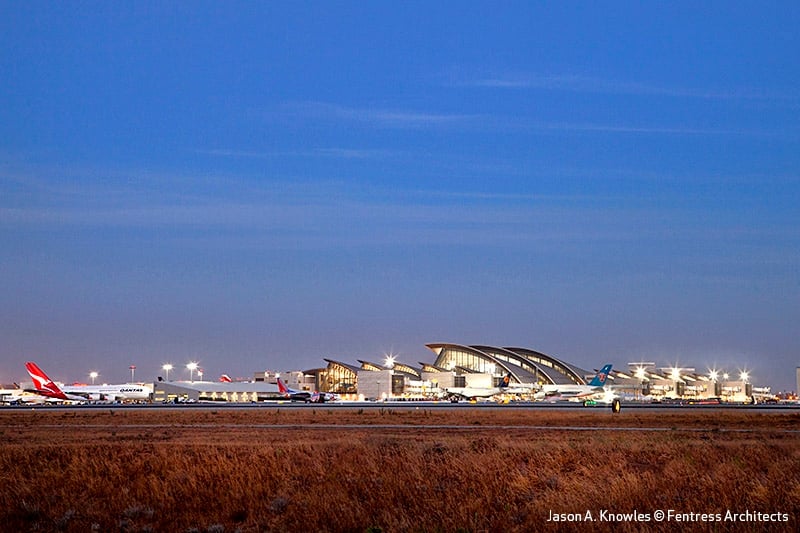 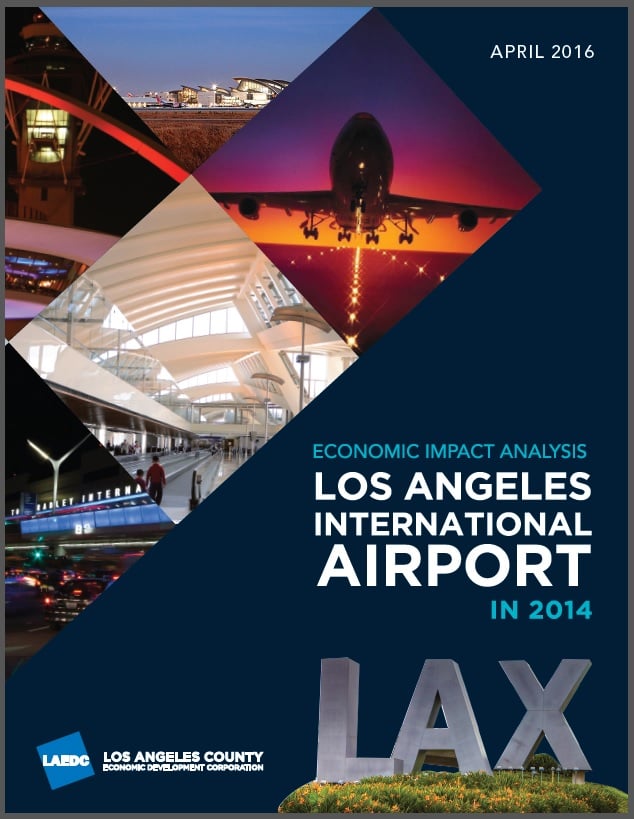 Here is the press release from LAWA:

LAX has long been recognized as being an economic engine for the six-county Southern California region and this new report quantified LAX’s total economic and fiscal impacts from airport activity and airport services, as well as from its on-going capital-improvement program.

Over a 15-year period starting in 2008, Los Angeles World Airports will have spent more than $14 billion to re-imagine, renovate and rebuild LAX.  The LAEDC study looked at the significant and positive economic impacts of $10.1 billion in spending for capital-improvement projects.

The on-going LAX Modernization Program, which is expected to finish in 2023, is supporting 121,640 additional annual jobs, with labor income of $7.6 billion, $20.3 billion in business revenues (output), $966 million in state and local taxes, and $8.7 billion in federal tax revenues.

“LAX is powering an economic resurgence across our city, and we are investing billions to make it even stronger,” said Los Angeles Mayor Eric Garcetti.  “Today’s LAEDC report confirms that this generational investment in our airport is paying off with hundreds of thousands of jobs for Angelenos and billions added to our local economy.”

“LAX is our gateway to the Pacific and the world, and it’s the entryway for good jobs and economic vitality throughout Southern California,” said City Councilmember Bob Blumenfield, chair of

the Council’s Innovation, Grants, Technology, Commerce, and Trade Committee, which oversees the airport.  “Our airport is a regional asset that has helped drive our success in tourism, trade, and innovation by business and recreational passengers who use it every day.  It is encouraging to see the results of the City’s investment in LAX, and I look forward to continuing to help LAX provide opportunity throughout the region.”

“LAX is a critical job generator for our City and our region, and I am very excited to see that a large number of those jobs benefit my district and my constituents,” said City Councilmember Mike Bonin, whose Council District 11 includes LAX.  “As the study highlights, the LAX Landside Access Modernization Program (LAMP) will create more good jobs, while also improving the passenger experience at LAX.  I look forward to this and the other work we are doing to make LAX a world-class airport, as well as a first-class neighbor.”

The report was based on LAX’s 2014 operations, when the airport served 70.7 million passengers and moved two million tons of mail and cargo on over 578,000 domestic and international flights.  On- and off-airport services supported 142,970 jobs in 2014.  Arriving visitors spent $9.7 billion and supported 155,640 jobs at the region’s many hotels, restaurants, theme parks and entertainment centers, and retail outlets.  Also, more than $45.6 billion of goods shipped through LAX to international destinations were produced by regional manufacturers, whose employees and suppliers benefited from these sales.  International exports supported 322,000 jobs.

Economic and fiscal effects include direct, indirect, and induced impacts resulting from ongoing activities, visitor spending, and international exports.  Direct impacts result from on- and off-airport aviation-related operations, including the numerous airlines, concessionaires, ground-handling services, ground transportation, other airport-wide businesses, and public agencies.  Indirect impacts result from activities of businesses that cater to aviation-related companies, including providers of office

supplies and equipment, hotels, restaurants, freight forwarders, warehouses, travel agencies, cargo handlers, as well as tourist and cultural attractions, and product manufacturers.  Induced impacts are generated by the household spending of the employees whose wages are sustained by both direct and indirect spending.

The LAEDC also analyzed the estimated $10.1-billion LAX Modernization Program and found the program is having an enormous impact on local employment, creating an estimated 121,640 construction-related annual jobs.  The study covered projects in development, planning, and undertaken by airlines and other tenants.

Over 30 projects in development – many of which are underway – include terminal improvements and upgrades, roadway improvements, runway and taxiway rehabilitation and improvement, and utilities and infrastructure components.  Together they account for $2.97 billion (or 30 percent) of the overall capital-improvement budget.

Working with airlines and other tenants, Los Angeles World Airports (LAWA) is also improving eight of the nine LAX terminals, as well as building a new hangar, at a cost of nearly $1.65 billion.

“The LAX Modernization Program is creating an estimated 121,640 annual jobs and generating $7.58 billion in worker wages, making it one of the City’s largest public-works programs in Los Angeles history,” said Sean Burton, president of the Los Angeles Board of Airport Commissioners, which oversees Los Angeles World Airports (LAWA).  “By investing in LAX’s infrastructure, we are ensuring that the airport will remain competitive in the global market, attracting visitors and business to Los Angeles, and putting residents to work now and for years to come. ”

“Los Angeles World Airports is revitalizing LAX to provide facilities, amenities, and quality customer service that today’s travelers expect from a world-class airport,” said Deborah Flint, chief executive officer of Los Angeles World Airports, the City department that owns and operates LAX and two other Southern California airports.  “The projects underway at LAX, and those being planned, are also of a size and duration that will create new jobs and provide opportunity for meaningful participation of small, local and diverse businesses.”

The largest numbers of Southern California workers supported by on-going activities at LAX were in the following fields:  transportation and warehousing; accommodation and food services; administrative and waste services; health and social services; government; retail trade; real estate and rental; and professional/scientific/technical.

The “Los Angeles International Airport in 2014:  Economic Impact Analysis” report can be found at

Established in 1981, the Los Angeles County Economic Development Corporation (LAEDC) provides strategic economic development leadership to promote a globally competitive, prosperous and growing L.A. County economy to improve the health and wellbeing of our residents and communities and enable those residents to meet their basic human need for a job.  We achieve this through objective economic research and analysis, strategic assistance to government and business, and targeted public policy.  Our efforts are guided and supported by the expertise and counsel of our business, government and education members and partners. Since 1996, the LAEDC’s Business Assistance Team has directly helped to retain or attract over 200,000 annual jobs in Los Angeles County. The LAEDC is a public-benefit, private, nonprofit organization established under section 501(c) (3).    www.LAEDC.org

LAX is the seventh busiest airport in the world and third in the United States.  LAX served more than 74.9 million passengers in 2015.  LAX offers 692 daily nonstop flights to 85 cities in the U.S. and 928 weekly nonstop flights to 67 cities in 34 countries on 59 commercial air carriers.  LAX ranks 14th in the world and fifth in the U.S. in air cargo tonnage processed, with more than 2.1 million tons of air cargo valued at over $86.9 billion.  LAX is part of a system of three Southern California airports – along with LA/Ontario International and Van Nuys general aviation – that are owned and operated by Los Angeles World Airports, a proprietary department of the City of Los Angeles that receives no funding from the City’s general fund.

For more information about LAX, please visit www.lawa.aero/lax or follow on Twitter @flyLAXAirport, on Facebook at www.facebook.com/LAInternationalAirport, and on YouTube at www.YouTube.com/laxairport1.  Information about LAX’s ongoing multi-billion-dollar LAX Modernization Program, as well as tips and shortcuts to help navigate LAX during construction, are available at www.LAXisHappening.com.

As a covered entity under Title II of the Americans with Disabilities Act, the City of Los Angeles does not discriminate on the basis of disability and, upon request, will provide reasonable accommodation to ensure equal access to its programs, services, and activities.  Alternative formats in large print, braille, audio, and other forms (if possible) will be provided upon request.