The Employment Development Department (EDD) released the state and local employment reports for the month of March. Total California nonfarm employment increased by 4,200 jobs over the month in seasonally adjusted (SA) terms. Additionally, the February increase originally reported as 39,900 was revised up to 46,600. The March year-over-year change showed an increase of 420,800 jobs (SA). This equated to a growth rate of 2.6%, exceeding the national growth rate of 2.0%. California’s private sector added 374,000 (an increase of 2.8%) over the year, while employment in the public sector rose by 1.9% (46,800 jobs). 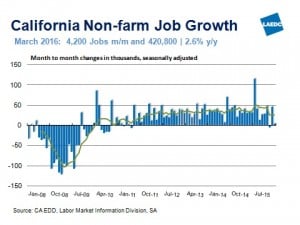 Employment growth continued across most industry sectors in March, with nine of the 11 super-sectors adding jobs over the year: construction; trade, transportation and utilities; information; financial activities; professional and business services; educational and health services; leisure and hospitality; other services and government for a combined gain of 429,400 jobs. Educational and health services posted the largest gain on a numerical basis, adding 104,700 jobs (up 4.3%), while construction continued to claim the largest gain in percentage terms, up 5.6% and adding 39,600 jobs.

California’s unemployment rate declined again over the month, falling from 5.5% in February to 5.4% in March, closing in on the national rate of 5.0%. In spite of its rapid decline, California’s unemployment rate is still the 17th highest in the U.S. (including Washington D.C.). The year ago rate was 6.6%. The number of employed persons now stands at a record high of over 18 million (an increase of 2.0% over the year), while the number of unemployed workers fell by 17.9% over they year to 1.0 million. California’s labor force also grew over the year, increasing by 0.7% to 19.1 million workers. 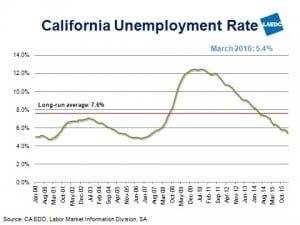 Private education and health services posted the largest year-over-year increase, adding 36,800 jobs. Most of the gain was in health care (up by 28,400 jobs), while educational services added 8,400 jobs to the total. Leisure and hospitality payrolls increased by 19,900 jobs, while trade, transportation and utilities expanded by 11,100 jobs. Manufacturing recorded the only decline over the year, contracting by 5,100 jobs, with job losses about evenly divided between durable and nondurable goods.

Summary: Employment in California and in the Los Angeles five-county region continues to trend up with Los Angeles notably achieving an unemployment rate matching that of the state. Most sectors added jobs over the month in March, while unemployment rates across the region are at their lowest levels since 2006. The year-over-year gains remain on track with impressive job gains in many industries, including health care, professional business services, leisure and hospitality, and construction. (Kimberly Ritter-Martinez)

The California Association of Realtors (CAR) released their March report covering California existing home sales and median prices. The statewide median price rose over the year by 4.0% to $483,020 and was the strongest gain in six months. Compared with February, the median price moved higher by 8.9%, reversing a two month decline. 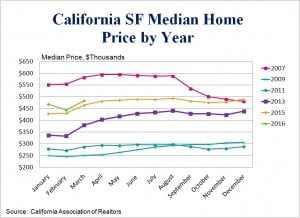 Sales of single-family homes rose by 5.7% over the year in March to 415,220 units sold (annualized rate, adjusted for seasonality). The spring home buying season is underway but sales growth during the coming months will be tied to the regions in California where affordability is less of a problem (inland areas) and where inventory is more abundant. In the San Francisco bay area, for example, where year-over-year sales were down by 8.1% in March, the inventory of homes for sale was just 2.6%. In contrast, with a 4.0 month supply, sales growth in the Los Angeles metro area increased by 1.7%, and in the Inland Empire, where there was a 4.5 month supply, sales increased by 5.3% over the year in March. The lack of inventory and competition for what is available in many of California’s coastal employment centers continues to exert strong upward pressure on prices.

This is your opportunity to get the data first hand and ask questions of Economist Kimberly Ritter-Martinez and State Treasurer John Chiang.