The U.S. Labor Market Report covering the national employment situation in March showed a gain of 215,000 nonfarm jobs. The unemployment rate ticked up to 5.0% as more people entered or returned to the labor force. The average workweek was unchanged at 34.4 hours and the average hourly wage increased by seven cents to $25.43. Over the year, average hourly earnings were up by 2.3%.

The employer payroll survey reported that total nonfarm employment in the United States increased by 215,000 jobs in March, once gain exceeding expectations. The private sector contributed 195,000 jobs to the March increase, while government jobs increased by 20,000. There were also revisions to the January and February figures that resulted in employment gains that were 1,000 less than previously reported.

Job gains continue to be strongest in the service sector with an increase of 199,000 jobs that was partially offset by a decline of 4,000 jobs in goods-producing industries. The goods producing sector includes mining and logging, construction and manufacturing. Last month, job losses were concentrated in mining and logging (-12,000 jobs) and manufacturing (-29,000), while construction employment increased by 37,000 jobs. The industries that posted the largest gains over the month were retail trade (47,000 jobs); health care (44,000 jobs); and leisure and hospitality (40,000 jobs). Over the past three months, job gains have averaged 209,000 compared with 127,000 during the same period last year. 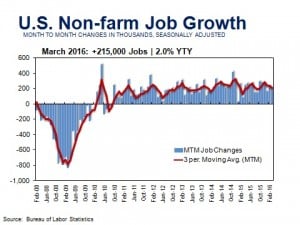 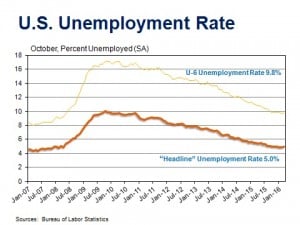 There continues to be some underlying distress in the labor markets. The more comprehensive U-6 unemployment rate ticked up to 9.8% but was down from the year-ago rate of 10.9%. The average for the U-6 measure going back to 1994 is 10.7%. The U-6 unemployment rate is the broadest measure of unemployment, counting part-time workers who would prefer full-time work and individuals who would like to work but have given up looking for a job. The number of individuals out of work six months or longer also remains above prerecession levels at 2.2 million people or 27.6% of all unemployed workers.

Summary: March was another month of solid job growth, coming in above expectations. The economy continues to add jobs on an annual basis of about 2.0%, which is consistent with economic growth continuing over the course of this year. Although wage growth could be better, employment and wage gains appear to be strong enough to be drawing workers back to the workforce. (Kimberly Ritter-Martinez)

U.S. Vehicle Sales Ease Up on the Accelerator

U.S. light vehicle sales slowed in March, declining by 3.5% over the year to 16.5 million units even though there were two more selling days last month than the same period last year. The March selling pace was significantly below the year ago rate of 17.1 million units, and the slowest pace of sales since February of last year. On a per unit volume basis, approximately 1.59 million light vehicles were sold last month, a 3.0% increase compared with year ago levels (IHS Global Insight). 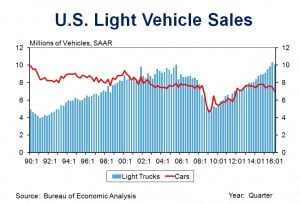 Light trucks, SUVs and crossover utility vehicles continue to dominate the new vehicle landscape, picking up additional market share in March. Sales were up by just 2.8% over the year in March to 9.8 million units, but accounted for 59.3% of the sales mix last month.

Total passenger car sales, including foreign and domestic models, fell by 11.4% over the year to 6.7 million units. This was the slowest sales pace for passenger cars since late 2011. Sales of passenger cars have fallen in 10 of the past 12 months on a year-over-year basis. Through the first quarter of this year, passenger car sales were 92,000 units lower than the same period last year, while sales of light trucks were up by 215,000 units (IHS Global Insight).

Sales of medium-heavy trucks, which are typically used by businesses for hauling freight and making deliveries, increased by 1.4% over the year in March to 450,000 vehicles.

The environment for car and truck sales remains very favorable – fuel prices are low, credit is readily available and employment growth continues – but some automakers are having to worker harder for sales by offering more generous incentives. This is particularly true for passenger cars as the market continues to favor light trucks. There has also been in uptick in sales to rental car companies. Although Americans are still buying cars in large numbers, the market may nearing its peak. (Kimberly Ritter-Martinez)