The Employment Development Department (EDD) released the state and local employment reports for the month of February. Total California nonfarm employment increased by 39,900 jobs over the month in seasonally adjusted (SA) terms. Meanwhile, the January loss of 1,500 jobs was revised down to a loss of 4,000 jobs. The year-over-year change showed an increase of 451,600 jobs (SA). This equated to a growth rate of 2.8%, exceeding the national growth rate of 1.9%. California’s private sector added 412,000 jobs (an increase of 3.1%) over the year, while employment in the public sector rose by 1.6% (39,600 jobs). 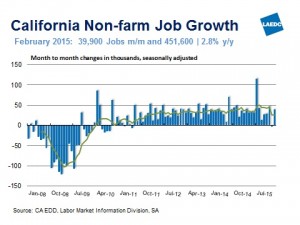 Employment growth continued across most industry sectors in February, with nine of the 11 super-sectors adding jobs over the year: construction; trade, transportation and utilities; information; financial activities; professional and business services; educational and health services; leisure and hospitality; other services and government for a combined gain of 457,300 jobs. Educational and health services posted the largest gain on a numerical basis, adding 102,700 jobs (up 4.3%), while construction continued to claim the largest gain in percentage terms, up 7.6% and adding 53,800 jobs.

California’s unemployment rate declined over the month, falling from 5.7% in January to 5.5%, and was down from the year ago rate of 6.7%. The number of employed persons now stands at a record high of nearly 18 million (an increase of 1.9% over the year), while the number of unemployed workers fell by 16.4% over the same period to 1.0 million. California’s labor force also grew over the year, increasing by 0.7% to 19.0 million workers. 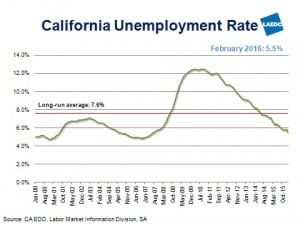 Educational and health services posted the largest year-over-year increase, adding 37,000 jobs. Most of the gain was in health care jobs (up by 29,400), while educational services added 7,600 jobs. Leisure and hospitality payrolls increased by 19,500 jobs, while professional business services employment expanded by 13,800 jobs. Manufacturing recorded the only decline over the year, contracting by 8,100 jobs.

Summary: Employment in California and in the Los Angeles five-county region continues to trend up. Most sectors added jobs over the month in February, while unemployment rates, already at their lowest levels since 2006, continue to fall. The year-over-year gains remain on track with impressive job gains in many industries, including health care, professional business services, leisure and hospitality, and construction. (Kimberly Ritter-Martinez)

The California Association of Realtors (CAR) has released their report on California existing home sales and median prices in February. The statewide median price rose over the year by 3.8% to $446,460, but was down over the month by 4.7% breaking a five month run of month-over-month price gains. February’s year-over-year increase was the slowest rate of growth in six months and, in a reversal of recent trends, reflects a shift in sales toward lower-priced inland areas. Affordability and tight supply are beginning to drive aspiring home owners away from core urban areas to suburban neighborhoods and beyond.

Sales of single-family homes increased by 6.4% over the year in February to 393,360 units sold (annualized rate, adjusted for seasonality), but this is coming off a very low base of sales during the first quarter of last year. Although slowly improving, sales activity remains muted because of the low inventory of homes for sale – baby boomers are staying in their homes and new home construction remains at very low levels. Over the month, sales were up by 2.6%.

Seasonally adjusted U.S. retail and food services sales in February declined by “only” 0.1%, somewhat less than expected. The big disappointment in this report was the sharp downward revision of the January figure from a gain of 0.2% to a decline of 0.4%. Core retail sales (total sales less automobiles, gasoline stations and building supply centers increased by 0.2%.

In spite of the overall loss, some retail categories posted strong gains in February including building material and supply centers (up by 1.6%); health and personal care stores (+0.7%); clothing and accessories stores (+0.9%); sporting goods, hobby, book and music stores (+1.2%); and foods service and drinking places (+1.0%). 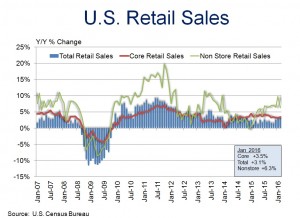 On a year-over-year basis, total retail sales in February were up by 3.1%. Most major sectors continue to report year-over-year gains with the exception of electronics and appliances stores (-3.2%) and gasoline stations (-16.5%). General merchandise stores remained in positive territory, up by 2.3% over the year in spite of the drag inflicted on this sector by declining department store sales (-2.2%). The biggest winners over the year were building material and garden supplies dealers, up by a whopping 12.2%, followed my motor vehicle parts and dealers (+6.8%); and sporting goods, hobby, book and music stores (+6.7%).

While further revisions may be in store next month, perhaps to the upside, some forecasters may be rethinking their expectations for first quarter GDP growth. Still, even the with weak showing for the first two months of 2016, retail sales are expected to move higher in March (helped by a recent uptick in gasoline prices). Consumer spending, of which retail sales are one part, is still doing all the heavy lifting in terms of U.S. economic growth. (Kimberly Ritter-Martinez)

Real spending on travel and tourism increased by 1.7% (seasonally adjusted annualized rate) during the fourth quarter of 2015. This followed an increase of 4.5% during the third quarter. In comparison, real gross domestic product rose by 1.0% during the final quarter of last year. The Bureau of Economic Analysis tracks the travel and tourism industry in the United States because it is an important source of jobs and economic activity, especially so in Southern California. Additionally, foreign visitors traveling to the U.S. and the Los Angeles region are an important source of export revenue. 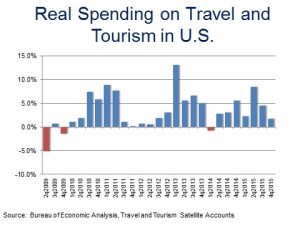 Spending on travel-related goods and services was $843.7 billion during the fourth quarter of 2015, compared with $840.1 billion in the previous quarter. The leading contributors to the deceleration in fourth quarter spending were traveler accommodations, which declined by 4.2% and transportation-related commodities (ex. air transportation), down by 6.8%. Declines in these categories partially offset gains in passenger air transportation (up by 12.7%); food services and drinking places (5.9%); recreation and entertainment (9.9%); and shopping (1.6%).

Prices for travel and tourism goods and services were also down in the fourth quarter, declining by 1.5%. Although prices were up in most sectors: traveler accommodations (6.4%); food services and drinking places (2.3%); and recreation and entertainment (1.0%), the steep decline in prices for transportation (-7.6%) pushed the tourism goods and services price index into negative territory.

The travel and tourism industry continues to be a source of steady job growth, posting consecutive gains since the second quarter of 2010. Direct employment in this sector increased by 1.6% during the fourth quarter after expanding by 2.2% in the previous quarter. Employment across all industries in the United State rose by 1.9%. All travel-related sectors posted a gain in employment, ranging from 4.1% for food services and drinking places to 0.8% for transportation. During the fourth quarter, over 5.7 million workers were employed in the U.S. travel and tourism industry or about 4.0% of total nonfarm employment. (Kimberly Ritter-Martinez) 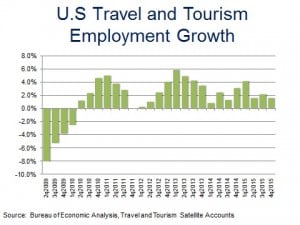