The U.S. Labor Market Report covering the national employment situation in February showed a gain of 242,000 nonfarm jobs. The unemployment rate held steady for the second month at 4.9%. The average workweek edged down by 0.2 hour to 34.4 and the average hourly waged declined by three cents to $25.35. Over the year, average hourly earnings were up by 2.2%.

The employer payroll survey reported that total nonfarm employment in the United States increased by 242,000 jobs in February exceeding expectations. The private sector contributed 230,000 jobs to the February increase, while government jobs increased by 12,000. There were also revisions to the December and January figures that resulted in employment gains that were 30,000 jobs higher than previously reported.

Job gains were concentrated in the service sector with an increase of 245,000 jobs that was partially offset by a decline in goods-producing industries of 15,000 jobs. The goods producing sector includes mining and logging, construction and manufacturing. Job losses were concentrated in mining and logging and construction, while construction employment rose by 19,000. The largest gains over the month were in health care services (57,500 jobs); retail trade (54,900 jobs); and leisure and hospitality (48,000 jobs). Over the past three months, job gains have averaged 228,000 compared with 208,000 during the same period last year. 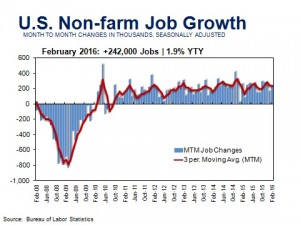 Turning to the household survey, the unemployment rate remained unchanged over the month at 4.9%. There was also an increase in the labor force participation rate (62.9% versus 62.7% in January). Labor force participation has now increased four consecutive months and stands above its year-ago level. Over the last 12 months, an additional two million workers have joined the labor force. 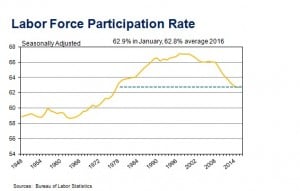 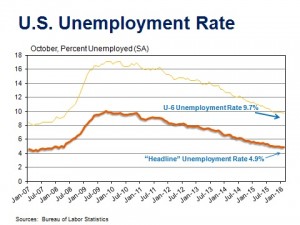 Summary: Job growth in February was decidedly solid, coming in above expectations. The economy continues to add jobs on an annual basis of about 2.0%, which is consistent with economic growth continuing over the course of this year. Although wage growth could be better, employment and wage gains appear to be strong enough to be drawing workers back to the workforce.
(Kimberly Ritter-Martinez)

The Employment Development Department (EDD) released the state and local employment reports for the month of January. Total California nonfarm employment declined by 1,500 jobs over the month in seasonally adjusted (SA) terms. The year-over-year change showed an increase of 444,900 jobs (SA). This equated to a growth rate of 2.8%, exceeding the national growth rate of 1.9%. California’s private sector added 406,600 jobs (an increase of 3.0%) over the year, while employment in the public sector rose by 1.6% (38,300 jobs). 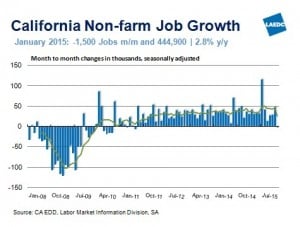 Recent industry employment trends remained largely intact in January, with 10 of the 11 super-sectors adding jobs over the year: construction; manufacturing; trade, transportation and utilities; information; financial activities; professional and business services; educational and health services; leisure and hospitality; other services and government for a combined gain of 449,400 jobs. Educational and health services posted the largest gain on a numerical basis, adding 100,700 jobs (up 4.2%), while construction continued to claim the largest gain in percentage terms, climbing by 6.5% and adding 45,700 jobs.

Only one industry sector recorded a decline in January: mining and logging employment plunged by 4,500 jobs, a decrease of 14.5%.

California’s unemployment rate declined slightly over the month, edging down from 5.9% in January to 5.7% and was down from the year ago rate of 6.8%. The number of employed persons (civilian) in California now stands at nearly 18 million (an increase of 1.7% over the year), while the number of unemployed workers fell by 14.8% over the same period to 1.1 million in January. 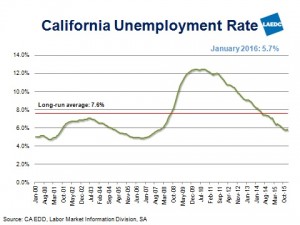 Summary: January was marked by significant monthly employment declines that were predominately the result of firms shedding seasonal workers. The year-over-year gains, however, continue on track with impressive gains in many industries, including health care, professional business services, leisure and hospitality, and construction. Unemployment rates, already at their lowest since 2006, declined still further in January. (Kimberly Ritter-Martinez)

In February, U.S. light vehicle sales were up by 6.8% over the year to 17.4 million units, virtually unchanged from January, but the highest for the month of February in 15 years. On a per unit volume basis, approximately 1.34 million light vehicles were sold last month, up by 6.7% from a year ago (IHS Global Insight). 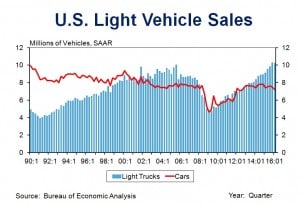 Robust demand for light trucks, SUVs and crossover utility vehicles (CUVs) shows no sign of slacking. Sales increased by 12.4% over the year in February to 10.3 million units and accounted for nearly 59% of the sales mix again last month.

Total passenger car sales, including foreign and domestic models, were down slightly, falling by 0.2% over the year to 7.2 million units. Sales of passenger cars have fallen in 10 of the past 12 months on a year-over-year basis. Through the first two months of this year, passenger car sales are more than 47,000 units lower than last year (IHS Global Insight).

Sales of medium-heavy trucks, which are typically used by businesses for hauling freight and making deliveries, rose by 6.7% over the year in February to 440,000 vehicles.

The environment for car and truck sales remains very favorable – fuel prices are low, credit is readily available and employment growth continues – but recent stock market volatility may have given some consumers the jitters. Manufacturers reported higher inventory levels in January and February, leading to expectations for stronger sales in March as auto-makers increase incentive activity to clear out excess inventory.