The Employment Development Department (EDD) released the state and local employment reports for the month of December. Total California nonfarm employment increased by 60,400 jobs over the month in seasonally adjusted (SA) terms. The year-over-year change showed an increase of 459,400 jobs (SA). This equated to a growth rate of 2.9%, exceeding the national growth rate of 1.9%. California has consistently added jobs at a faster rate than the nation as a whole since early 2012. California’s private sector added 423,900 jobs (an increase of 3.2%) over the year, while employment in the public sector rose by 1.5% (35,500 jobs). 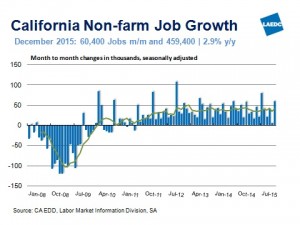 Industry employment trends remained on track in December with nine of the 11 super-sectors adding jobs over the year: construction; trade, transportation and utilities; information; financial activities; professional and business services; educational and health services; leisure and hospitality; other services; and government for a combined gain of 464,900 jobs. Professional and business services posted the largest gain on a numerical basis adding 124,700 jobs (up 5.0%), while construction continued to claim the largest gain in percentage terms, climbing by 8.6% and adding 59,300 jobs. In spite of a long string of sharp gains, construction industry employment in California remains 21% below the peak level reached in early 2006.

Two industry sectors recorded a decline in December. Mining and logging employment tumbled by 9.6%, a loss of 3,000 jobs, while manufacturing employment declined by 2,500 jobs or -0.2%.

California’s unemployment rate increased slightly over the month, ticking up from 5.7% in November to 5.8%, but was down from the year ago rate of 7.1%. The number of employed persons (civilian) in California now stands at 17,900,400 (an increase of 1.9% over the year), while the number of unemployed workers plunged by 18.7% over the same period to 1,096,100 in December. 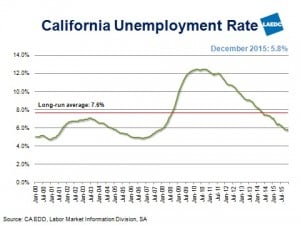 Leisure and hospitality posted the largest year-over-year gain in employment in December with an increase of 23,900 jobs. Healthcare and social assistance also saw a large increase, adding 22,400 jobs over the year.

Three major industry sectors reported year-over-year declines in December: manufacturing employment contracted by 6,200 jobs (5,200 in durable goods); information lost 3,000 jobs (2,800 of which were in motion picture and sound recording), and in the mining and logging sector, job counts fell by 400.

Summary: California closed 2015 with impressive job gains and a year-end unemployment rate that was at its lowest since 2006. In Southern California, Los Angeles County alone finished the year with nearly 94,000 jobs added over December 2014, while the other counties experienced significant gains as well. Job gains occurred throughout the year in key industries such as healthcare, professional and business services, construction, and leisure and hospitality.” (Kimberly Ritter-Martinez)

U.S. retail and food services sales in December declined by 0.1% over the month, while the 0.2% increase in November was revised up to 0.4%. Core retail sales (total sales less automobiles, gasoline stations and building supply centers) also declined by 0.1% in December.

In spite of the overall decline, six of the 13 major retail sectors posted gains in December, some of them quite solid. Sales at furniture and home furnishings stores advanced by 0.9%; sporting goods, hobby, book and music stores matched that gain, while restaurants and bars posted an increase of 0.7%. Other winners included building material and garden supply stores (0.7%); nonstore retailers (0.3%); and health and personal care stores (0.2%).

Indirectly contributing to the December decline was the flat reading for motor vehicles and parts dealers. Auto sales make up about 20% of total retail sales, and up until December, had been a major driver of U.S. retail sales. The largest percentage declines were posted by miscellaneous retailers (-2.0%) and nonstore retailers (-1.1%). Sales were also down at electronics and appliance stores (-0.2%); food and beverage stores (-0.3%); clothing stores (-0.9%); and general merchandise stores (-1.0%).

On a year-over-year basis, total retail sales in December were up by 2.2%. Most major sectors are reporting year-over-year gains with the exception of electronics and appliance stores (-3.8%) and gasoline stations (-14.6%). Department stores, a subsector of general merchandise stores (which eked out a 0.1% gain over the year), were down by 2.1% over the year. The biggest winners over the year were sporting goods, hobby, book and music stores (up 7.6%); nonstore retailers/e-commerce (7.1%); and restaurants and bars (6.7%). 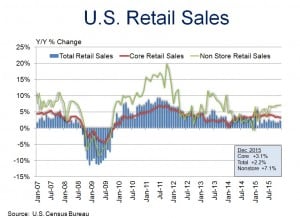 Retail sales closed the year on a disappointing note, up by only 2.2% over the year compared with 3.5% for all of 2014. Holiday sales also fell short of expectations, coming in at 3.0%, well below the National Retail Federation’s forecast of 3.7%. While consumers are saving substantial sums at the gasoline pump, it has not translated into increased spending and stayed just that – savings. The national saving rate was 5.2% year-to-date in November versus an average of 4.9% for 2014. (Kimberly Ritter-Martinez)

Headline Inflation Edges Down in December

The Consumer Price Index for All Urban Consumers (CPI-U) decreased 0.1% in December (seasonally adjusted), but was up 0.7% over the year (not seasonally adjusted). The 2015 December-to-December increase, the second smallest such increase in the last 50 years, was slightly below that of 2014 (+0.8%) and well below the average of the last decade (+1.9%). 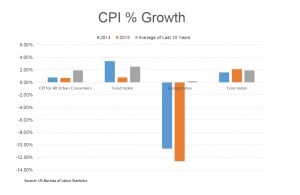 The Los Angeles CMSA (LA-Riverside-OC) Consumer Price Index edged down 0.1% last month, but increased by 2.0% compared to a year ago.