By Adam WeissJanuary 6, 2016 No Comments

In 2016, the United States is expected to experience one birth every eight seconds and one death every ten seconds. Meanwhile, net international migration is expected to add one person to the U.S. population every 29 seconds. The projected combination of births, deaths and net international migration will increase the U.S. population by one person every 17 seconds.
The projected world population on January 1 was 7,295,889,256, an increase of 77,918,825, or 1.1% percent, from New Year’s Day 2015. During January 2016, 4.3 births and 1.8 deaths are expected worldwide every second. 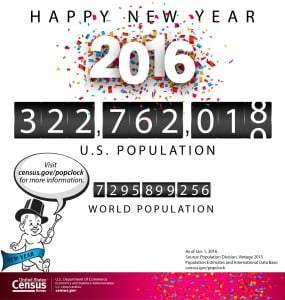 The U.S. economy as a whole may have had a so-so year in 2015, but the automotive industry had reason to celebrate, setting a new sales record with 17.47 million vehicles sold (the previous record was 17.35 million set in 2000) and posting six straight years of year-over-year sales gains. 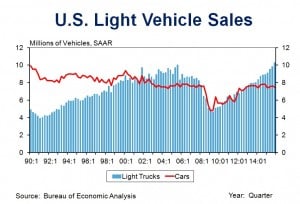 Throughout 2015, U.S. auto sales were dominated by demand for light trucks, SUVs and crossover utility vehicles (a vehicle built on a car platform that combines design elements and features of an SUV). Sales increased by 12.5% over the year in December to 10.1 million units and accounted for 58.5% of the sales mix, the highest since peaking at 61% in June of 2005.

Total passenger car sales, including foreign and domestic models, declined by 9.0% over the year to 7.1 million units. Sales of passenger cars were down in nine of the past 12 months on a year-over-year basis.

Sales of medium-heavy trucks, which are typically used by businesses for hauling freight and making deliveries, rose by 4.8% over the year in December to 440,000 vehicles.

In spite of a year rocked by major recalls (Volkswagen, Takata air bags, GM ignition switches), the U.S. auto industry welcomed the new year with plenty of momentum at its back. Last year’s record sales were supported by a solid economy, historic low interest rates and more confident consumers. Looking ahead, 2016 will likely be another good, if not quite as robust, year for the industry. Interest rates will increase, but job and income growth along with more optimistic consumers should deliver sales of 17.5 to 18.0 million units. (Kimberly Ritter-Martinez)

The U.S. Commerce Department reported that both imports and exports declined in November, but imports were down more than exports, leading to a decline the U.S. trade deficit. The November deficit of $42.4 billion was down $2.2 billion from a revised $44.6 billion in October. While this is the smallest reading since February, the trade deficit is up 5.5% relative to this time last year.

Before looking at the trade deficit components, it is interesting to note that The Organization for Economic Development and Cooperation cited lackluster growth in world trade when they revised their world growth estimates down in November 2015. The continued weakness in November imports and exports, shown below, is yet further evidence of the global economic weakness.(1)

The U.S. bilateral trade deficit with China, the largest trade deficit between the U.S. and any other country, declined again in November, decreasing to $31.3 billion from $33.0 billion in October (not seasonally adjusted). The U.S. also ran trade deficits with most of its other major trading partners, including Canada, Japan, the European Union, Germany and Mexico, in November.
Bottom Line: The U.S. trade deficit edged down in November, reflecting current weakness in global trade and output overall. However, the U.S. still holds a relatively strong economic position and, with consumer spending driving the current expansion, expectations are for increased import demand. (Bengte Evenson)

2. It should be noted that these are nominal values, and as such, are affected by the strength of the dollar and weakness of certain prices, especially commodities. Once converted to real terms, both exports and imports of goods would likely be higher in 2015 compared to a year earlier.

Southern California home sales increased slightly over the year in November, rising by 2.4% to 16,122 units (new and resale houses and condominiums). Although sales have now risen on a year-over-year basis for ten months in a row, the November advance was 23.8% below the November average going back to 1988 when this data series began. This was one of the slowest growth rates posted for the month of November on record. Compared with October, sales plunged by 19.1%, about twice the average decline in sales that typically occurs between October and November. The slower pace of sales reflects the twin constraints of declining affordability and tight credit. The continuing lack of inventory is also a factor, affecting even wealthier buyers with top notch credit.