The Employment Development Department (EDD) released the state and local employment reports for the month of November. Total California nonfarm employment increased by 5,500 jobs over the month in seasonally adjusted (SA) terms. Before adjusting for seasonality, the gain was 78,600 jobs. The year-over-year change showed an increase of 417,100 jobs (SA). This equated to a growth rate of 2.6%. This was the slowest rate of increase since September 2012 when it was 2.5%, but still exceeded the November national increase of 1.9%. California’s private sector added 378,400 jobs (an increase of 2.8% over the year), while employment in the public sector rose by 1.6% (38,700 jobs). 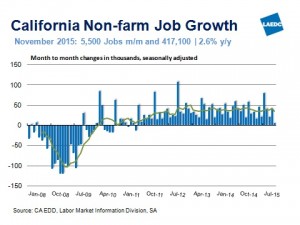 Industry employment held to trend in November with nine of the 11 super-sectors adding jobs over the year: construction; trade, transportation and utilities; information; financial activities; professional and business services; educational and health services; leisure and hospitality; other services; and government for a combined gain of 424,300 jobs. Professional and business services posted the largest gain on a numerical basis, adding 116,000 jobs (up 4.7%), while construction continues to claim the largest gain in percentage terms, increasing by 5.9% and adding 41,000 jobs.

Two industry sectors recorded a decline in November. Mining and logging employment dropped by 9.3%, a loss of 2,900 jobs, while manufacturing employment was down by 0.3% or 4,300 jobs.

California’s unemployment rate declined slightly from 5.8% in October to 5.7% in November and was down from the year ago rate of 7.2%. California’s unemployment rate is now the lowest it has been since November 2007 when it was also 5.7%. The number of employed persons in California now stands at 17,910,100 (an increase of 2.1% over the year), while the number of unemployed workers tumbled by 20.2% over the same period to 1,081,800 in November. Although California has been working its way up the ranks, it still had the 13th highest unemployment rate in the nation last month, while at 2.7%, North Dakota had the lowest. 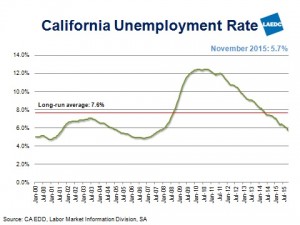 Educational and health services posted the largest year-over-year gain in employment in November with a net increase of 22,400 jobs. The health care industry added 24,800 jobs, but a decline of 2,400 jobs in educational services partially offset the increase.

Also recording significant job gains were leisure and hospitality, which picked up 19,700 jobs, 87% of which were in accommodation and food services, and professional and business services employment with the addition 15,900 jobs.

Summary: California led the nation with the largest annual wage and salary job gain of 417,100 in November, while the unemployment rate fell to its lowest in over eight years. In Southern California, every region saw decreases in unemployment rates and job gains in key industries such as health care, professional and business services, construction, and leisure and hospitality. (Kimberly Ritter-Martinez)

The California Association of Realtors (CAR) recently released their report on California existing home sales and median prices in November. The statewide median price fell slightly (by 0.2%) compared with October to $475,000, but was up over the year by 6.8%. 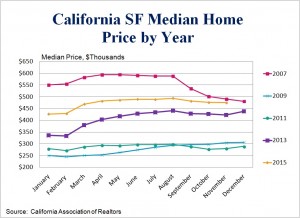 The number of single-family homes in California that closed escrow in November fell by 1.6% over the year to 369,680 units (seasonally adjusted annualized rate). Compared with October, sales were down by 8.4%. This was the first time sales dipped below 400,000 since March 2015 and was the first year-over-year decline since January 2015.

Mortgage interest rates inched up in November, with the 30-year, fixed-mortgage interest rate averaging 3.94%, up from 3.80% in October, but below the year ago rate of 4.00%. The Federal Reserve’s recent announcement that it would raise the Federal Funds rate has been anticipated for a long time and should not initially have an adverse impact on the housing market since interest rates are still at historical lows. The CAR report noted that the increase might actually help home sales in the near-term. Potential buyers who had been hesitating may finally move now that interest rates are expected to begin a slow but steady rise over the next few years.

Real disposable income (adjusted for taxes and inflation) rose by 0.2%. Real personal consumption expenditures, on the other hand, rose at a slightly faster rate – 0.3%. Accordingly, the personal saving rate dipped to 5.5% in November from 5.6% in October. Real spending on durable goods was up by 1.1% over the month, while spending on nondurable goods rose by 0.9%. Spending on services, which comprise 65% of consumer spending, was flat for the second month in a row.

On a year-to-year basis, incomes and spending moved higher in November:

Consumer prices were unchanged over the month in November but edged up over the year by 0.4%. Excluding food and energy, prices advanced by 1.3%.

The Consumer Price Index for All Urban Consumers (CPI-U) was unchanged in November (seasonally adjusted). Over the year, the all items index was up 0.5% (not seasonally adjusted), the largest 12-month increase so far in 2015, while the core index growth was stable at 2.0%. 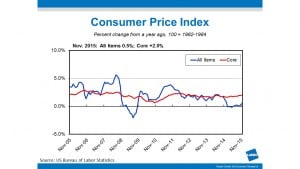 The Los Angeles CMSA (LA-Riverside-OC) Consumer Price Index was unchanged last month, and increased by 1.6% compared to a year ago.

The Federal Reserve Industrial Production Index continued its decline in November, moving down 0.6% from October revised levels. Over the year, the index was down 1.2%.
U.S. industrial production in the manufacturing industry was flat in November, and up 0.9% over the year revised. Most non-durable goods showed increased production (0.5% gain), but this was offset by declines in durable goods and other manufacturing industries (-0.2% and -1.7%, respectively). Industries with large losses (1.0% or more) included primary metals; electrical equipment, appliances and components; apparel and leather; and motor vehicles and parts.

Relative to a year ago, the index for oil and gas well drilling and servicing has declined by more than half, reflecting the global weakness in energy markets. This contributed to a decline in industrial production in the mining industry of 8.2% over the year (-1.1% in November). Industrial production in the utilities industry was also down 7.6% over the year (-4.3% in November) with the continuation of unseasonably warm winter weather.

The Capacity Utilization Rate for manufacturing decreased slightly in November to 76.2%, down from 76.3% in September and still somewhat below the long-run average rate of 78.5%. Many industries are showing softness in capacity utilization, suggesting a lingering slack in the economy that could diffuse prices pressures in an already soft price environment. (Bengte Evenson)

The U.S. Census Bureau released figures for third quarter state and local tax collections by state and type of tax. At $211.5 billion, total state tax revenues collected across all fifty states (excluding Washington, DC) were up by 3.2% in the third quarter of 2015 compared with the same period in 2014. In California, tax revenues were up by 4.1% to $32.7 billion in the third quarter – a reflection of stronger economic growth and the improving health of state and local government finances within California. 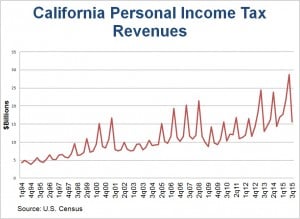 California’s corporations paid $1.3 billion in income taxes during the third quarter, a decline of 17.6% compared with the same period a year ago. Corporate tax payments tend to be even more volatile than personal income taxes, but they count for a relatively small share of California’s “Big Three” revenue sources. Across the U.S., corporate income tax revenues edged down by 0.1%.

Other noteworthy changes include a 9.5% increase in California’s property tax revenues, the result of rising home prices, and a decline of 8.7% in motor fuel taxes, which help to fund expansion and maintenance of state’s roads and highways.

Real spending on travel and tourism increased by 4.3% (seasonally adjusted annualized rate) during the third quarter of 2015. This followed an increase of 8.4% in the second quarter. In comparison, real gross domestic product rose by 2.0% during the third quarter. The Bureau of Economic Analysis tracks the travel and tourism industry in the United State because it is an important source of jobs and economic activity, particularly here in Southern California. Additionally, foreign visitors traveling to the U.S. are an important source of export revenue. 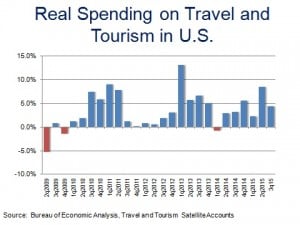 Overall, prices for travel and tourism goods and services in the third quarter edged down by 0.3%. Prices were up in a number of sectors: accommodations (2.6%); food and drinking establishments (2.3%); recreation and entertainment venues (1.3%) and shopping (0.8%); but those gains were more than offset by falling prices for air transportation (-7.9%).

The travel and tourism industry has been a source of steady job growth since the second quarter of 2010. Direct employment in this sector increased by 2.2% during the third quarter after expanding by 1.6% in the previous quarter. All travel-related sectors posted a gain in employment, ranging from 4.0% for air transportation to 0.9% for traveler accommodations. During the third quarter, nearly 5.7 million workers were employed in the U.S. travel and tourism industry, which equated to about 4.0% of total nonfarm employment. 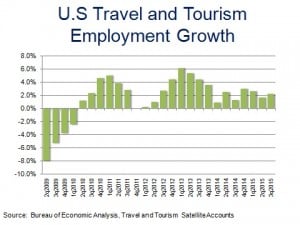