The Employment Development Department (EDD) released the state and local employment reports for the month of October. Total California nonfarm employment increased by 41,200 jobs over the month in seasonally adjusted (SA) terms. Moreover, the 8,200 job gain initially reported for September was revised up to 21,100 jobs. 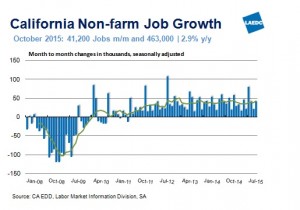 There was little change in employment trends across industries. Nine of the 11 super-sectors added jobs over the year to October: construction; trade, transportation and utilities; information; financial activities; professional and business services; educational and health services; leisure and hospitality; other services and government for a combined gain of 468,300 jobs. Professional and business services once again posted the largest gain on a numerical basis, adding 130,000 jobs (up 5.3%), while construction continues to claim the largest gain in percentage terms, increasing by 7.3% and adding 49,800 jobs.

Two sectors that recorded a decline over the year in October. Mining and logging was down by 7.4%, a loss of 2,300 jobs; manufacturing employment edged down by 0.2% or 3,000 jobs.

California’s unemployment rate declined slightly from 5.9% in September to 5.8% in October and was down from the year ago rate of 7.2%. California’s unemployment rate is now the lowest it has been since December 2007 when it was also 5.8%. The civilian labor force edged down over the month by 0.1%, but was up over the year by 0.6%. Of the 11.4 million Californians not in the labor force, 808,000 (7.1%) say they would like a job, while 0.7% of that group reported being discouraged over job prospects. 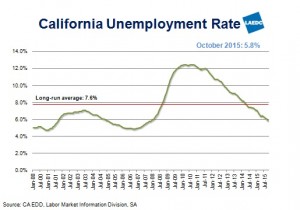 Educational and health services posted the largest year-over-year gain in employment in October with a net increase of 22,600 jobs. The health care industry added 23,500 jobs, but a drop of 900 jobs in educational services reduced the overall industry gain.

Also recording significant job gains were leisure and hospitality, which picked up 18,700 jobs, most of which were in accommodation and food services, and professional and business services employment with the addition 15,300 jobs.

Summary: California’s labor market was back on track in October after a somewhat weaker showing in September and the unemployment rate continued its downward trend. In Southern California, every region saw job gains along with year-over-year decreases in their unemployment rates. Los Angeles County’s unemployment rate fell to 6.1%, the lowest since early 2008. (Kimberly Ritter-Martinez)

The California Association of Realtors recently released their report on California existing home sales and median prices in October. The statewide median price fell by 1.3% compared with September to $475,990, but was up over the year by 5.7%.

The number of single-family homes in California that closed escrow in October increased by 1.3% over the year to 403,510 units (seasonally adjusted annualized rate). Compared with September, sales were down by 5.1%. The year-to-year gain was the lowest since January 2015 and was well below the six-month average increase of 9.7% recorded between April and September of this year.

California home sales are on track to close the year with a mid-single digit increase over last year. Employment growth and low interest rates should keep demand growing at a modest pace through the remaining months of 2015, but housing affordability is a big issue in many parts of California and is negatively impacting sales in some regions. The Bay Area in particular continues to see sharp increases in median price due to a shortage of homes for sale. As a result, homeownership is increasingly out of reach for more and more people.

Headline Inflation Edges Up in October

The Consumer Price Index for All Urban Consumers (CPI-U) increased by 0.2% in October after two consecutive months of declines. Over the year, the all items index was also up by 0.2%. 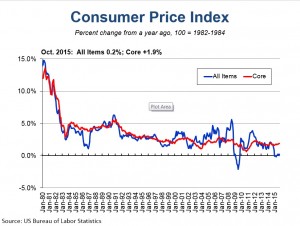 The Los Angeles CMSA (LA-Riverside-OC) Consumer Price Index advanced by 0.2% last month, and increased by 1.0% compared to a year ago.

The Federal Reserve Industrial Production Index decreased 0.2% in October, the third consecutive month of decline. Over the year, the index was up 0.3%.

Despite the strong dollar and weak global growth, U.S. industrial production in the manufacturing industry gained 0.4% in October (1.9% over the year). Both durable and non-durable goods showed increased production (0.5% and 0.3%, respectively) and gains were widespread across industries. Industries with large gains (1.0% or more) included nonmetallic mineral products; wood products; electrical equipment, appliances and components; textile and product mills; and petroleum and coal products. One industry that saw a decline was apparel and leather (-2.6%), which is consistent with the concurrent weakness in the industry’s price index.

In the face of low oil prices, industrial production in the mining industry fell 1.5% in October (-6.9% over the year), reflecting declines in crude oil extraction as well as oil and gas well drilling and servicing. Industrial production in the utilities industry was down 2.5% in October (-1.5% over the year), reflecting a decline in electric utilities production during the unseasonably warm fall.

The Capacity Utilization Rate for manufacturing edged up in October to 76.4%, up from 76.2% in September. This is still below the long-run average of 78.5%, mainly because nondurable goods industries were operating at 2.5 percentage points below the long-run average rate. For example, capacity utilization rates are more than 10 percentage points below the long-run average for apparel and leather. Many durable goods industries, however, had October capacity utilization rates above their long-term average, including fabricated metal products; electrical equipment, appliances and components; motor vehicles and parts; aerospace and miscellaneous transportation; and furniture and related products. (Bengte Evenson)

The LAEDC Industry Outlook and Economic Forecast is one of the most accurate and insightful you can attend! More details to follow.