The Employment Development Department (EDD) released the state and local employment reports for the month of September. Total California nonfarm employment increased by 8,200 jobs over the month in seasonally adjusted (SA) terms following a gain of 42,000 jobs in August. 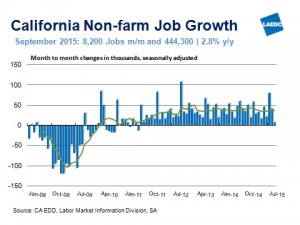 While industry employment trends have been consistent for several months, job growth in California mirrored the slowdown seen in the September national numbers. Nine of the 11 super-sectors added jobs over the year to September: construction; trade, transportation and utilities; information; financial activities; professional and business services; educational and health services; leisure and hospitality; other services; and government for a combined gain of 451,000 jobs. Professional and business services posted the largest gain on a numerical basis, adding 130,200 jobs (up by 5.3%), while construction claimed the largest gain in percentage terms, increasing by 6.4% or 43,900 jobs.

California’s unemployment rate declined from 6.1% in August to 5.9% in September and was down from the year ago rate of 7.3%. This was the first time California’s unemployment rate dropped below 6.0% since November 2007. The civilian labor force was down over the month (-0.2%), but increased over the year by 0.8%. That’s equivalent to 143,700 new entrants to the labor force.

Education and health services posed the largest year-over-year gain in employment in September with a net increase of 25,200 jobs. The health care industry added 24,100 jobs, while private education employment increased by 1,100 jobs.

Also recording significant jobs gains were leisure and hospitality, up by 19,400 jobs, and professional, scientific and technical services, up by 8,100 jobs.

Four major industry sectors reported year-over-year declines in September. Mining and logging lost 200 jobs, manufacturing was down by 1,200 jobs, finance and insurance posted a decline of 2,200 jobs, and information was down by 2,500 jobs.

Summary: Employment growth in California slowed in September, mirroring the slower pace of job growth that occurred at the national level. However, California continues to add jobs at a faster rate than the nation. It is generally best not to read too much into one month – we could see an upward revision next month. It is difficult to determine if the labor markets have simply hit a soft patch or if this is the start of a longer trend. In any case, the LAEDC expects to see job growth slow as we move into 2016, which reflects an economy in a mid- to late-cycle expansion. (Kimberly Ritter-Martinez)

Activity Slows at Ports of Los Angeles and Long Beach

The total number of containers handled at the ports of Long Beach and Los Angeles in September 2015 decreased by 1.4 percent on a year-over-year basis to 1,385,931 TEUs (twenty-foot equivalent units). Cargo volumes for the combined ports have largely returned to their underlying trends following the heavy slowdowns resulting from labor disruptions. Total containers at the Port of Los Angeles slowed by 5.8 percent on a year-over-year basis, after having one of the busiest months since 2006, while volumes at the Port of Long Beach improved by 4.1% in September when compared to last year, following a couple months of record levels. 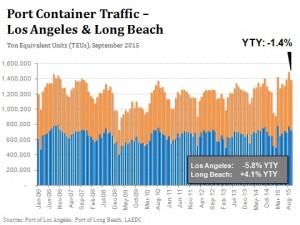 Bottom Line: Customer confidence is improving and distortions in loaded inbound containers (imports) caused by labor disputes appear to have run their course, with imports at the San Pedro Bay ports staying relatively flat in September 2015 year-to-date, dipping by only 0.5 percent compared with last year. On the other side of the trade ledger, loaded outbound containers (exports) have been declining for the last fifteen months, largely a result of an appreciating U.S. dollar and slow growth for Los Angeles’ trading partners, particularly in developing Asia. Local exports declined by 11.1 percent on a year-to-date basis. Moving forward, imports should improve as U.S. domestic demand continues to strengthen, while slow economic growth abroad will continue to suppress export activity. At this rate, total container activity for the year is expected to match, if not exceed, last year’s activity. (George Entis)

The State Controller’s office has released the September cash report for the State’s General Fund. Three months into the fiscal year (2015-2016), total receipts were up by 7.7% to $23.8 billion compared with the same period last year. Total disbursements ($32.2 billion) were down by 14.1% over the same period, but still exceeded cash receipts by $8.3 billion. As of September 30, the state’s cash balance stood at -$5.8 billion.

Total revenues (receipts from taxes, licenses, fees or investment earnings) were up by 6.5% to $22.2 billion compared with the first three months of the previous fiscal year. So far this year, total revenues are running slightly ahead of expectations, but two of the state’s top three revenue sources failed to match projections.

The schedule of cash disbursements in the Controller’s report showed that expenditures on Local K-12 Education were $9.5 billion during the first three months of the fiscal year, a decline of 29.9% compared with the same period last year. Expenditures for Community Colleges dropped by 4.9% to $1.6 billion. The UC and CSU Systems have fared better this year – disbursements were up by 13.2% from the year ago level. Contributions to CalSTRS (the state teacher’s pension fund) increased by 47.0% to $332.1 million.

Spending for the Department of Corrections was little changed from last year, edging up by 1.3% to $2.5 billion Meanwhile, the amount California spent on health and human services plummeted by 40.5% to $715.5 million compared with $1.2 billion during the same three month period last year. The amount the state has paid to service its debt obligation so far this year was up marginally, rising by 1.4% to $862.2 million.

As of September 30, the General Fund had $32.7 billion in unused borrowable resources against $5.8 billion in outstanding loans, which are composed entirely of internal borrowing and is current to this year – no outstanding loans were carried over from the previous fiscal year. (Kimberly Ritter-Martinez)