Southern California home sales increased over the year in August, rising by 8.0% to 21,352 units (new and resale houses and condominiums). Over the month, sales fell by 12.0% and were 18.0% below the average August price going back to 1988. The sales slowdown was seen across all home-types, counties and price ranges. While a July-to-August slowdown is typical, it may also reflect tighter inventories and/or declining affordability. Nonetheless, home sales have risen on a year-over-year basis for seven consecutive months, the longest stretch of gains since late 2012 into early 2013. Additionally, the decline between July and August followed two months of the highest home sales since August 2006.

Throughout 2015, Southern California’s housing market has continued to make progress. Contributing to improvements over the past year have been stronger job growth, rising household income, increases in homeowners’ equity, fewer homeowners in financial distress and low mortgage interest rates. Low inventories, declining affordability and the availability of credit continue to be constraints but anticipated wage gains and higher household incomes should drive accelerated housing market activity over the next couple of years. (Kimberly Ritter-Martinez)

Real disposable income (adjusted for taxes and inflation) increased by 0.3%, while real personal consumption expenditures moved up by 0.4%. With the increase in spending outpacing real income growth, the saving rate edged down from 4.7% in July to 4.6% in August. Spending on durable goods increased by 1.2%, while spending on nondurable goods and services rose by 0.6% and 0.3% respectively.

On a year-to-year basis, incomes and spending moved higher in August:

Consumer prices were unchanged over the month in August but were up by 0.3% over the year. Excluding food and energy, prices advanced by 1.3%. The current low-inflation environment has helped support consumer spending in the absence of stronger hourly wage gains.

Although personal income growth was a little lower in August than expected, consumer spending is supporting economic growth. Households are feeling more confident about the economy and their personal financial outlook. Consumers are using credit more freely while household wealth has reached record levels buoyed by financial market returns and increases in property values. (Kimberly Ritter-Martinez)

The U.S. Census Bureau released figures for second quarter state and local tax collections by state and type of tax. At $274.4 billion, total state tax revenues collected across all fifty states (excluding Washington, DC) were up by 5.8% in the second quarter of 2015 compared with the same period in 2014 – a reflection of stronger economic growth and the improving health of state and local finances. In California, tax revenues were up by 13.8% to $51.4 billion in the second quarter, an increase of nearly $6.3 billion.

All three of California’s largest tax revenue categories recorded significant increases in collections during the second quarter. General sales tax revenues rose by 6.0% to $10.3 billion, but were outpaced by the national increase of 9.2%. Personal income tax revenues were $28.7 billion in the second quarter, an increase of 20.6% over the year. Nationally, personal income taxes were up by 13.6%. The strong gain is indicative of healthy job growth and rising household incomes. 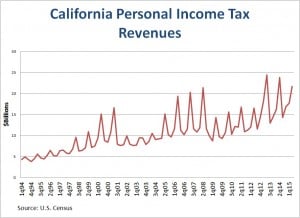 California’s corporations paid $4.7 billion in incomes taxes during the second quarter, an increase of 12.5% compared with the same period a year ago. Corporate tax payments tend to be very volatile – in the first quarter of this year, corporate tax revenues decline by 2.5% — but they count for a relatively small share of California’s “Big Three” revenue sources. Across the U.S., corporate incomes taxes were up by 5.5%.

Other noteworthy changes include a 7.8% uptick in property tax revenues, the result of rising home prices, and a decline of 2.9% in motor fuel sales taxes stemming from increased vehicle fuel efficiency and the rising use of hybrid or electric cars.