The Employment Development Department (EDD) released the state and local employment reports for the month of August. Total California nonfarm employment increased by 36,300 jobs over the month in seasonally adjusted (SA) terms. 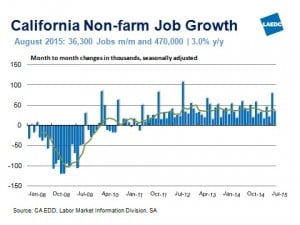 Industry employment trends have been consistent for several months. Nine of the 11 super-sectors added jobs over the year to August: construction; trade, transportation and utilities; information; financial activities; professional and business services; educational and health services; leisure and hospitality; other services and government for a combined gain of 473,900 jobs. Professional and business services posted the largest gain on a numerical basis, adding 134,600 jobs (up 5.5%), while construction claimed the largest gain in percentage terms, increasing by 6.5% or 43,800 jobs.

There were two sectors that recorded a decline over the year in August. Mining and logging was down by 8.6%, a loss of 2,700 jobs; manufacturing employment dipped by 0.1% or 3,900 jobs.

Educational and health services posted the largest year-over-year gain in employment in August with a net increase of 22,500 jobs. The health care industry added 23,300 jobs, but a drop of 800 jobs in educational services reduced the overall industry gain.

Also recording significant job gains were trade, transportation and utilities (17,100 jobs), and leisure and hospitality (16,800 jobs). Most of those jobs were concentrated in accommodation and food services.

Two of the major industry sectors reported year-over-year declines in August. Mining and logging lost 300 jobs, while manufacturing continued on its long-term trend decline with a loss of 4,700 jobs. 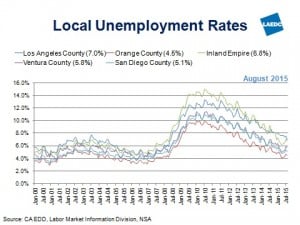 Summary: California led the nation once again with 36,300 jobs added last month and 470,000 over the year. Los Angeles led the Southern California region with 76,300 jobs added in yearly terms, while the Inland Empire and Orange County led the region in percentage terms with gains of 3.4% and 3.2% respectively. (Kimberly Ritter-Martinez)

The number of single-family homes in California that closed escrow in August increased by 9.3% over the year to 431,800 units (seasonally adjusted annualized rate). Compared with July sales were down by 3.8%. Home sales in August were at their highest level since October 2012 and was the fifth straight month in which sales rose above 400,000 units.

Home prices are increasing at a healthier rate, meaning they have slowed from the breakneck pace that prevailed in 2013 and 2014 to something that more accurately reflects the fundamentals of housing demand: job and wage growth. Still, much of the appreciation that is occurring statewide is being fueled by supply constraints in the Bay Area were the median price was up by 10.4% to $804,190, but sales were flat over the year. Elsewhere, sales are on the rise in the Inland Empire and Central Valley, where homes are both more affordable and available.

While momentum is building in California’s housing markets, higher mortgage interest rates and reduced affordability are creating an environment of uncertainty that may cause some potential buyers to take a step back from the market.

U.S. retail and foods services sales in August were up by 0.2% over the month, while the figure for July was revised up slightly from 0.6% to 0.7%. Core retail sales, which do not include autos, gasoline and building supply centers, rose by 0.5%.

On a year-over-year basis, total retail sales in August were up by 2.2%. Most major sectors are reporting year-over-year gains with the exception of electronics and appliance stores (-2.5%), department stores (-1.9%) and gasoline stations (-17.2%), primarily because of declining prices (retail sales are not adjusted for prices changes). The biggest winners over the year have been restaurants and bars (8.2%), nonstore retailers, primarily e-commerce (6.9%); the catch-all category sporting goods, hobby, book and music stores (6.1%); and motor vehicles (5.7%). 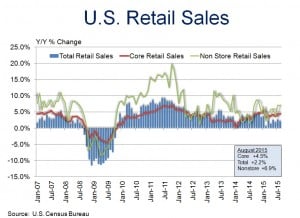 Retail sales in August were slightly below expectations, but the three-month annualized rate was up by more than five percent. Sustained gains in the labor market, lower gasoline prices, rising consumer credit and record levels of household wealth should continue to provide a lift for consumer spending, the major driver of U.S. economic growth. (Kimberly Ritter-Martinez)

Real spending on travel and tourism was up by 6.5% (seasonally adjusted annualized rate) during the second quarter of 2015. This followed an increase of 2.2% in the first quarter. In comparison, real gross domestic product increased by 3.7% during the second quarter. The Bureau of Economic Analysis tracks the travel and tourism industry in the United States because it is an important source of jobs and economic activity, particularly here in Southern California. Additionally, foreign visitors traveling to the U.S. are an important source of export revenue.

Total direct spending on travel-related goods and services was $827.2 billion during the second quarter of this year compared with $814.2 billion in the previous quarter. Spending on passenger air transportation jumped by 11.6%; food services and drinking places expenditures increased by 7.2%; recreation and entertainment was up by 3.5% and shopping increased by 4.3%.

Overall prices for travel and tourism goods and services were up by 1.0% in the second quarter after declining by 8.7% during the first quarter. Prices for recreation, entertainment and shopping were collectively up by 1.5%, while prices at restaurants rose by 2.5%. The largest jump in prices was for non-air transportation (car rentals, gasoline), which increased by 16.5%. These gains were largely offset by lower prices for air travel (-9.7%) and accommodations (-7.7%).

The travel and tourism industry has also been a source of steady job growth since the second quarter of 2010. Direct employment in this sector increased by 1.6% during the second quarter of 2015 after expanding by 2.1% in the previous quarter. With the exception of accommodations, where employment fell by 1.0%, jobs increased across the industry. Transportation employment increased by 2.8%, food services payrolls expanded by 2.3%; tourism-related jobs in recreation, entertainment and shopping increased by 2.8%. During the second quarter, over 5.6 million workers were employed in the U.S. travel and tourism industry, which equated to about 4% of all nonfarm payroll jobs in the U.S. (Kimberly Ritter-Martinez) 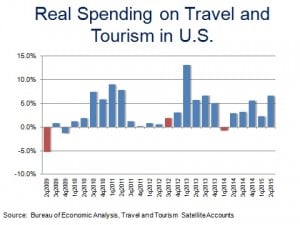 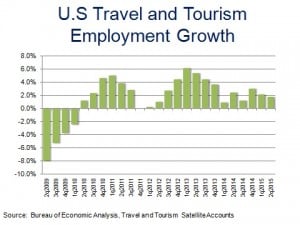