By adminSeptember 8, 2015 No Comments

The U.S. Labor Market Report covering the national employment situation in August showed a gain of 173,000 nonfarm jobs. The unemployment rate fell to 5.1% and the average hourly wage rose by eight cents to $25.09. Over the year, average hourly earnings were up by 2.2%.

The employer payroll survey reported that total nonfarm employment in the United States increased by 173,000 jobs in August. This was somewhat below expectations, but does not signify a departure from the overall trend of strong employment growth. The private sector contributed 143,000 jobs to the August increase while the public sector added 30,000. Softening the blow of last month’s lower job count were upward revisions to the June and July figures that showed an additional 44,000 jobs added than previously reported. Over the past three months, job gains have averaged 221,000 per month. 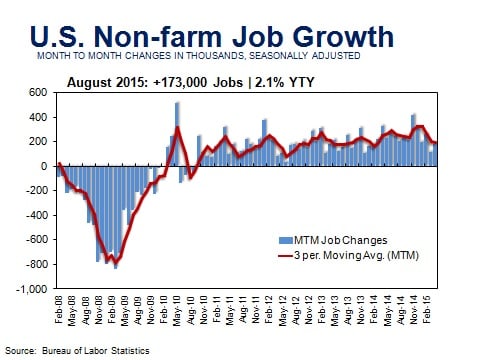 On a year-to-year (YTY) basis, U.S. employment expanded by 2.92 million jobs, an increase of 2.1%. Every major industry sector added jobs over the year with the exception of mining and logging. This sector includes the oil and gas extraction industries, which have been negatively affected by low energy prices. However, employment declines were also recorded in other types of mining, particularly coal and support activities related to the mining sector. Overall, employment in mining and logging declined by 8.9% or 80,000 jobs over the year. 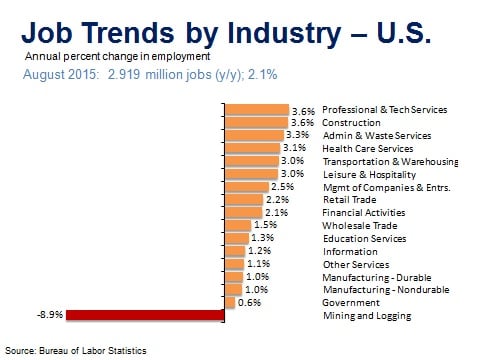 New record high levels of employment were reached last month in the following super-sectors: trade, transportation and utilities; professional and business services; education and health; leisure and hospitality; and other services (these are mainly jobs in repair and maintenance, personal and laundry services, and membership organizations).

In addition to the employer payroll survey, the monthly employment report includes a separate household survey that covers self-employed workers (whose businesses are unincorporated), unpaid family workers, agricultural workers and private household workers who are excluded from the establishment survey. The household survey showed an increase of 196,000 jobs over the month.

Summary: The pace of job growth in August may have been a little slower compared to recent months, but a broader survey of labor market indicators combine to reinforce our narrative of continuing improvement in the labor market and the general economy. (Kimberly Ritter-Martinez)

In August, U.S. light vehicle sales were up by 2.9% over the year to 17.7 million units (seasonally adjusted annualized rate). This was the fastest pace of sales since July 2005. On a per unit volume basis, 1.58 million light vehicles were sold last month, a slight decline (-0.5%) compared with year ago levels. That’s not so bad though when one considers there was one less selling day this August compared with last year and the Labor Day weekend fell in September this year. 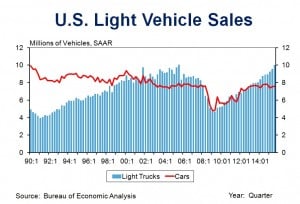 Sales momentum is solidly on the side of light trucks, especially cross over utility vehicles and full-size pickup trucks. Sales increased by 11.3% over the year in August to 10.2 million units and accounted for 57.5% of the light vehicles sales mix. This was the highest share of truck sales recorded since June 2005.

Total passenger car sales, including foreign and domestic models, fell by 6.6% over the year to 7.5 million units.

Sales of medium-heavy truck have maintained a strong pace, rising by 10.4% over the year in August to 476,000 vehicles. Since these heavier trucks are used by firms to haul freight and make deliveries, an increase in demand for these vehicles is an indication of stronger business activity.

Reflecting a healthy market for buyers and sellers, both incentives and transaction prices rose in August. Momentum in the automotive industry is expected to carry forward through the rest of the year, bolstered by moderating gasoline prices and positive news regarding economic growth and job creation. It’s looking likely that auto sales will exceed expectations this year, pushing past calendar-year projections of 17.1 million units to 17.2. (Kimberly Ritter-Martinez)

This conference will give BLS data users the opportunity to speak with BLS economists and learn more about the economic data series they produce. The sessions will provide an overview of BLS programs, how the data are collected, uses, trends, and how to access the data from the BLS web site. LAEDC chief economist, Dr. Robert Kleinhenz, will be a featured speaker on the U.S. and Los Angeles economy.

The Oil and Gas Industry in California: Its Economic Contribution and Workforce

The Oil and Gas Industry in California: Its Economic Contribution and Workforce