The Employment Development Department (EDD) released the state and local employment reports for the month of July. Total California nonfarm employment increased by 80,600 jobs over the month in seasonally adjusted (SA) terms. 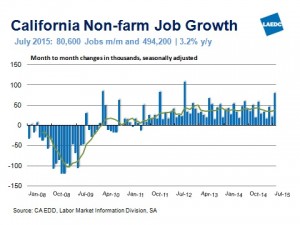 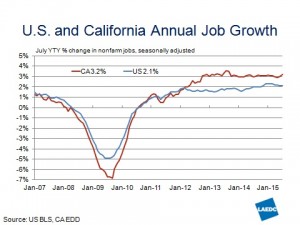 Industry sector trends were little changed from the past several months. Ten of the 11 super-sectors added jobs over the year to July: construction; manufacturing; trade, transportation and utilities; information; financial activities; professional and business services; educational and health services; leisure and hospitality; other services; and government for a combined gain of 496,500 jobs. Professional and business services posted the largest gain on a numerical basis, adding 156,100 jobs (up 6.4%), while construction claimed the largest gain in percentage terms, increasing by 7.3% or 48,900 jobs.

The only sector to record a decline over the year was mining and logging, down 2,300 jobs, an annual decline of 7.3%. 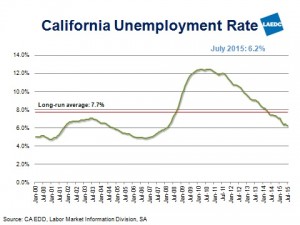 California’s unemployment rate declined slightly from 6.3% in June to 6.2% in May and was down from the year ago rate of 7.4%. The civilian labor force was unchanged over the month but was up by 1.3% over the year. Over the last 12 months, 236,800 workers have joined California’s labor force.

Summary: California added 80,600 jobs last month, the largest gain of any state and well ahead of Texas and Florida, which each added just over 30,000 jobs. In yearly terms, California added nearly half a million jobs with solid gains occurring locally in Orange County, the Inland Empire and in Los Angeles, which reported the largest annual job increase on over a year. (Kimberly Ritter-Martinez)

Southern California home sales increased over the year in July, rising by 16.9% to 24,235 units (new and resale houses and condominiums). Although sales fell slightly (-0.6%) over the month, the decline between June and July is typically much larger, averaging 6.1%. Sales have now risen on a year-over-year basis for six months and are approaching what might be considered a normal level. Last month’s sales were just 4.0% below average for the month of July, while in July 2014 sales were 18% below average. Cash, investor and distressed sales are continuing to trend down so that means more traditional buyers are jumping back into the market.

Rising demand for homes is a result of the confluence of job growth, low mortgage rates and more confident consumers. Concerns about the Fed moving to increase interest rates also may have prompted some buyers to get off the fence, and now that eight years have passed since the housing bust, former homeowners caught up in the first wave of foreclosures may be returning to homeownership. (Kimberly Ritter-Martinez)