The California Association of Realtors reported on California existing home sales and median prices in June. The statewide median price in June was $489,560, up 0.8% from May and up 7.0% from a year earlier. The June median price was also the highest recorded since November 2007. 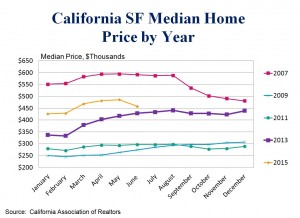 Statewide, the number of single-family homes that closed escrow in June increased by 11.0% over the year to 437,040 units (seasonally adjusted, annualized rate) and rose 3.3% from May. Home sales in June reached their highest level in nearly two years and was the third straight month in which sales rose above 400,000 units. Momentum in California’s housing market continues to hold up, although price gains may be somewhat less robust than last year.

With home prices continuing to rise and mortgage interest rates edging up ahead of the expected rate increase by the Federal Reserve, housing affordability is a growing concern. The interest rate in June on a 30-year fixed-mortgage averaged 3.98%, up from 3.84% in May and above the year ago rate of 3.16%.

Despite sustained increases over the last two years, the statewide median is still $100,000 shy of the previous peak of $595,500 that was established in May 2007. By comparison, a separate release from the National Association of Realtors reported that the national median had hit a new record high of $236,400 (for all homes).

The total number of containers handled at the ports of Long Beach and Los Angeles in June 2015 fell by 3.1 percent on a year-over-year basis to 1,305,424 TEUs (twenty-foot equivalent units) after rising the previous three months. Cargo volumes have largely returned to their underlying trends following the heavy slowdowns resulting from labor disruptions. At the Port of Los Angeles, total containers decreased by 2.0 percent on a year-over-year basis while the Port of Long Beach saw total containers drop by 4.4 percent in June when compared to last year. 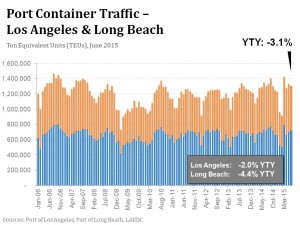 Bottom Line: Distortions in loaded inbound containers (imports) caused by labor disputes appear to have run their course, with imports at the San Pedro Bay ports improving in June 2015 by 0.7 percent from one year ago, but down by 2.7 percent on a year-to-date basis given the scale of the slowdown. On the other side of the trade ledger, loaded outbound containers (exports) have been declining for the last twelve months, largely a result of an appreciating U.S. dollar and slow growth for Los Angeles’ trading partners. Local exports declined by 14.1 percent on a year-to-date basis. Moving forward, imports should improve as U.S. domestic demand continues to strengthen, while slow economic growth abroad will continue to suppress export activity. (George Entis)