The U.S. Census Bureau regularly publishes reports that highlight the changing demographic landscape of America. Most recently, the Census Bureau revealed that millennials (persons born between 1982 and 2000) number 83.1 million and represent more than one quarter of the nation’s population. Because millennials constitute such a large share of the U.S. population (they outnumber the baby boomers by 7.7 million) and are now in or entering their prime working years, their attitudes and preferences regarding employment and consumption will have profound impact on the U.S economy.

Millennials are also much more diverse with 44.2% identifying as a minority race or ethnic group. In terms of diversity, however, the generation coming up behind the millennials is even more so. The youngest Americans (those 5 years old or less) have become the first majority-minority population group in the U.S. with 50.2% being part of a minority race or ethnic group. 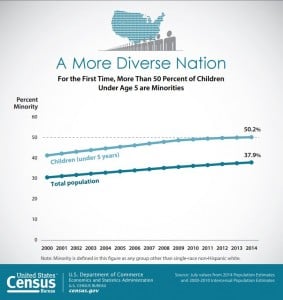 Contributing to the growing diversity of the United States, every race or ethnic group recorded more births than deaths between 2013 and 2014 except single-race non-Hispanic Whites. As of July 2014:

California Home Sales and Median Prices in May 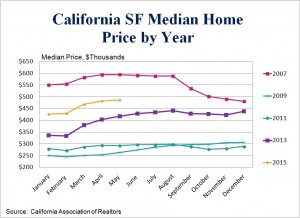 Statewide, the number of single-family homes that closed escrow in May increased by 8.9% over the year to 423,360 units (seasonally adjusted, annualized rate) but was down by 1.1% from April. Home sales in May reached their highest level in nearly two years and was the second straight month in which sales rose above 400,000 units. Momentum in California’s housing market is looking pretty solid, although conditions vary significantly by metro area with several still posting a year-to-year sales declines. San Francisco was among that group with a drop of 13% in May.

With home prices continuing to rise and mortgage interest rates edging up ahead of the expected rate increase by the Federal Reserve, housing affordability is becoming more and more of a concern. The interest rate in May on a 30-year fixed-mortgage averaged 3.84%, up from 3.67% in April, but still below the year ago rate of 4.19%.

Below is a year-over-year summary of sales and price activity in Southern California by county. Although the statewide sales figures are seasonally adjusted, regional and county figures are not. In four of the six counties, sales rose at a faster rate than prices – something we have not seen for a while.

The American Consumer – Alive and Well in May!

As a result of spending running well ahead of income last month, the personal saving rate fell from 5.4% in April to 5.1% in May.

Consumer prices were up over the month in May by 0.3% but over the year prices have edged higher by only 0.2%, well below the 3.5% annual increase in real disposable income.

After several months of sluggish spending, this was an encouraging report. The May consumer spending figures align more closely to improvements in the labor market and point to a stronger second quarter GDP report. Consumers on the whole are in better shape than has lately been assumed. A recent report released by the Federal Reserve showed that household balance sheets continue to improve. Household net worth increased by $1.6 trillion during the first quarter of this year to reach a record high of nearly $85 trillion. That equates to a year-over-year growth rate of 5.7%. The largest contributor to first quarter growth was the rise in the value of financial assets and capital gains. Gains in home equity also contributed but to a lesser degree. Of course, that means improvements in household finances are tilted to households that own a home, a stock portfolio or a retirement account. Stronger wage and salary gains would be a welcome development for everyone else. (Kimberly Ritter-Martinez)

In contrast, California’s corporations paid just $1.8 billion in income taxes during the first quarter, a decline of 2.5% compared with the same period a year ago. Corporate tax payments also tend to be very volatile but they count for a relatively small share of California’s “Big Three” revenue sources. Across the U.S., corporate income taxes were up by 9.9%. 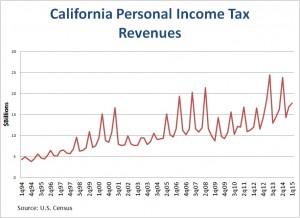