May State and Local Employment Report

The Employment Development Department (EDD) released the state and local employment reports for the month of May. Total California nonfarm employment increased by 54,200 jobs over the month in seasonally adjusted (SA) terms. 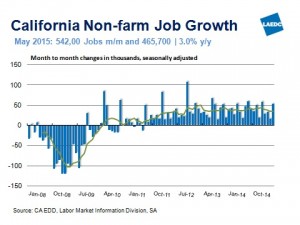 Ten of the 11 super-sectors added jobs over the year to May: construction; manufacturing; trade, transportation and utilities; information; financial activities; professional and business services; educational and health services; leisure and hospitality; other services; and government for a combined gain of 467,200 jobs. Professional and business services posted the largest gain on a numerical basis, adding 125,500 jobs (up 5.2%), while construction claimed the largest gain in percentage terms, increasing by 6.9% or 46,600 jobs.

California’s unemployment rate edged up to 6.4% in May from 6.3% in April but was down from the year ago rate of 7.6%. At 6.4%, California’s unemployment rate is now just 0.9 percentage points above the national rate and below the long run average (since 2000) for the state of 7.6%. Moreover, there is good news hidden in the increase since it was caused by the largest uptick in the state’s labor force in 25 years. Last month, 71,800 workers joined the labor force, an increase of 0.4%. Because so many more people were feeling optimistic about finding a job, the increase in the labor force outpaced the number of new jobs added. 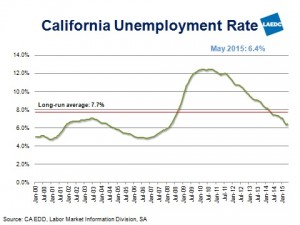 Educational and health services posted the largest year-over-year gain in employment in May with an increase of 30,100 jobs, over two-thirds of which were in health care and social assistance. Also recording significant job gains were trade, transportation and utilities (20,800 jobs); leisure and hospitality (15,900 jobs) and government (12,200), most of which occurred in local government.

Although California’s unemployment edged up in May, it was for the right reason: an increase in the labor force, which expanded by the largest margin since February 1990. Once again, California’s labor marketed added jobs at a faster annual pace than the nation with job gains occurring across a wide swath of the state’s industries. (Kimberly Ritter-Martinez)