California Financial Report for May

The State Controller’s office has released the May financial report for the California General fund. Eleven months in the fiscal year (2014-2015), total receipts were up by 12.0% to $99.6 billion compared with the same period last year. Total disbursements ($107.6 billion) increased by 13.3% over the same period, exceeding cash receipts by $8.0 billion. As of May 31, the state’s cash balance stood at -$6.1 billion.

Total revenues (receipts from taxes, licenses, fees or investment earnings) were up by 12.4% to $97.5 billion compared with the first 11 months of the previous fiscal year. The state relies most heavily on personal income tax revenues, followed by sales and use taxes, and then to a much smaller extent, corporate income taxes. Year-to-date, nearly 70% of general revenue funds have come from personal income taxes.

The schedule of cash disbursements in the Controller’s report showed that expenditures on Local K-12 Education were $40.2 billion during the first 11 months of the fiscal year, which was up by 16.2% compared with the previous year. Disbursements to Community Colleges increased by 20.4% to $4.4 billion. Funds received by the UC and CSU systems rose by 9.5% to $5.9 billion. Contributions to CalSTRS (the state teachers’ pension fund) increased by 9.3% to $1.5 billion.

Spending for the Department of Corrections increased by 9.9% to $8.9 billion, while outlays for Health and Human Services rose by 8.6% to $2.2 billion. The amount the state paid to service its debt obligation was up by 8.5% to $4.7 billion (debt service amounts are net of offsets such as federal subsidies and reimbursements for other services).
So far this fiscal year, General Fund receipts are running 0.1% ahead of Department of Finance projections. Unfortunately, disbursements were also slightly higher than expected with spending pushing past expectations by 0.7%.

As of May 31, the General Fund had $32.2 billion in borrowable resources against $6.1 billion in outstanding loans. The loan balance is comprised of $3.3 billion in internal borrowing and $2.8 billion of external borrowing in the form of revenue anticipation notes. (Kimberly Ritter-Martinez)

Strong Rebound in May Retail Sales

Spending on U.S. retail and food services made a strong comeback in May, rising by 1.2%, while the flat reading in April was revised up to 0.2%. Core retail sales (ex-autos, building supply centers and gasoline stations) increased by 0.5%.

The only category that recorded a decline in sales last month was health and personal care stores (-0.3%), while sales at miscellaneous store retailers were flat over the month.

On a year-over-year basis, total retail sales in May were up by 2.7%. Most major sectors reported a gain over the last 12 months except for gasoline stations (-18.6%); electronics and appliance stores (-1.7%) and general merchandise stores (-0.4%). 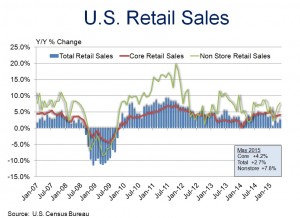 Overall, this was a good report. On a year-over-year basis, at 2.7% retail sales growth was weak. However, most of that weakness can be attributed to the 18.6% year-over plunge in gasoline sales that resulted from lower prices. The categories of retail sales that go into the GDP calculation to measure consumer spending were stronger than expected, an indication that consumer demand is alive and well. (Kimberly Ritter-Martinez)