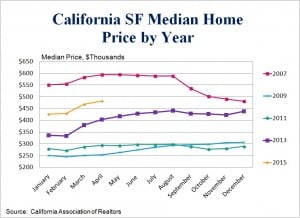 Statewide, the number of single-family homes that closed escrow in April increased by 9.3% over the year to 427,620 units (seasonally adjusted, annualized rate) and rose by 9.2% compared with March. This was the third consecutive month to post a year-over-year increase in sales and was the first time home sales in California rose above the 400,000 mark since October 2013. It appears that at least some of the pent-up demand for housing is finally starting to turn into actual sales.

Mortgage interest rates fell in April after increasing over the previous two months. The average 30-year fixed rate was 3.67%, down from 3.77% in March and down from 4.34% a year ago.

After remaining flat in March, total personal income in the U.S. rose by 0.4% in April. Gains were posted across the board. Wages and salaries, and proprietors’ income both increased by 0.2%; rental incomes were up by 0.6%; and income from interest and dividends rose by 1.2%. Government transfers (social security, Medicare, Medicaid, unemployment insurance, veterans’ benefits) increased by 0.2%.

Real disposable income (adjusted for taxes and inflation) increased by 0.3% but real personal consumption expenditures were unchanged over the month after rising by 0.4% in March. Spending on durable goods fell by 0.8%, while spending on nondurables edged down by 0.1%. The only spending category to post an increase was services, up by 0.1%. The strong increase in income relative to spending resulted in an increase in the saving rate to 5.6% in April compared with 5.2% in March.

On a year-to-year basis, incomes were up in April compared with March, but overall spending was unchanged:

The fact that consumers are choosing to spend less is helping to keep price inflation in check. Americans appear to be holding on to the extra bit of income they are earning. The flat reading for personal consumption expenditure does not bode well for consumer spending in the second quarter, which has gotten off to a weak start. (Kimberly Ritter-Martinez)

While issues like lower energy costs, a stronger dollar, and port capacity will be addressed, this year’s International Trade Outlook will also reveal the “trends to watch”, overlaying our region’s strengths with specific social, demographic and consumer trends in nations that are increasingly more connected to us via trade.