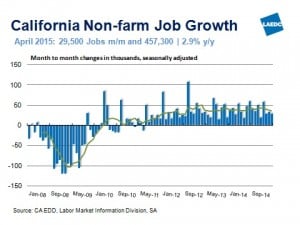 Ten of the 11 super-sectors added jobs over the year to April: construction; manufacturing; trade, transportation and utilities; information; financial activities; professional and business services; educational and health services; leisure and hospitality; other services; and government for a combined gain of 458,100 jobs. Professional and business services posted the largest gain on a numerical basis, adding 119,500 jobs (up 5.0%), while construction posted the largest gain in percentage terms, increasing by 6.4% or 42,600 jobs.

The only sector to record a decline over the year was mining and logging, down 800 jobs, or 2.6%.

California’s unemployment rate fell to 6.3% in April, down from 6.5% in March and down from the year ago rate of 7.8%. The April unemployment rate was the lowest in seven years. The state’s civilian labor force edged up by 0.1% over the month and by 1.1% over the year with the addition of 210,200 new entrants to the labor force. The labor force participation rate in California was 62.1% in April compared with the national rate of 62.8%. 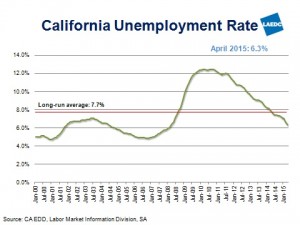 April was another good month for California’s labor markets. The state continues to outpace the nation in terms of job gains with employment growth occurring across a broad spectrum of industries. The local labor markets are also seeing ongoing improvement in terms of year-over-year jobs gains and declining unemployment rates. Throughout the Los Angeles five-county region unemployment rates are now well below the average rate going back to 2000. (Kimberly Ritter-Martinez)

Southern California homes sales increased over the year in April, rising by 8.5% to 21,708 units (new and resale houses and condominiums). This was the second consecutive yearly increase. On a month-to-month basis, home sales in the region were up by 9.9%. The number of homes sold last month was the second highest for the month of April since 2006, just behind April 2013 when 21,795 homes were sold.

The median price across Southern California increased by 6.2% over the year to $429,000 making it the highest median price since it was $435,000 in November 2007. The median price has risen year-over-year every month since April 2012 but is still below peak levels reached prior to the housing crisis. The median price in Orange County climbed to just 7% below the record high reached eight years ago. Los Angeles and San Diego counties are within 12% of peak prices, while in Riverside and San Bernardino, median prices are still about 30% below their high point reached six years ago.

Sales of higher priced homes are still driving market activity. Last month, the number of homes in the six-county region that sold for $500,000 or more accounted for 39.1% of all home sales, up from 35.8% a year ago and was the highest since reaching 40% in November 2007.

Last month was one of the strongest for April since the housing bust, but sales remain below average. The housing market recovery is still unfolding, but progress continues to be impeded by credit and affordability hurdles, tight inventories of existing homes and low levels of new home construction. (Kimberly Ritter-Martinez)

While issues like lower energy costs, a stronger dollar, and port capacity will be addressed, this year’s International Trade Outlook will also reveal the “trends to watch”, overlaying our region’s strengths with specific social, demographic and consumer trends in nations that are increasingly more connected to us via trade.

Basically Salient is beauitful from all around

Basically Salient is beauitful from all around