The U.S. Labor Market Report covering the national employment situation in February showed stronger than expected gains that were accompanied by a small uptick in wages. The labor market added 295,000 jobs last month and the unemployment rate dropped to 5.5%. After increasing by twelve cents in January, average hourly earnings on private nonfarm payrolls increased by three cents to $24.78 in February. Over the year, average hourly earnings were up by 2.0%, well ahead of inflation and thus boosting real wages and consumer spending power.

The employer payroll survey reported that total nonfarm employment in the United States increased by 295,000 jobs in February. The December employment figure remained unchanged, but November employment was revised down from 257,000 jobs to 239,000. Job growth has averaged 288,000 jobs over the last three months. February was also the twelfth consecutive month where job gains topped the 200,000 mark. 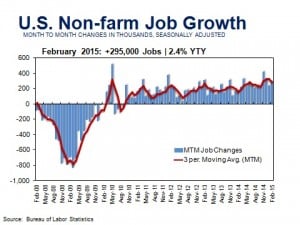 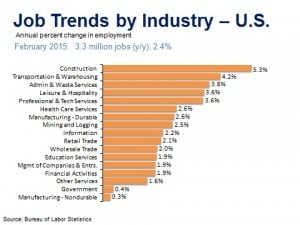 While job gains and a declining unemployment rate point to steady improvement in the labor markets, indicators of underlying distress have also made significant gains. The more comprehensive U-6 unemployment rate, which counts part-time workers who would prefer full-time work and persons who would like to work but have given up looking for a job fell to 11.0% from 12.6% a year ago.

Also encouraging, as of February, someone who is out of work would need a little over 13 weeks to find a new job. A year ago it would have taken over 16 weeks. Improvements in the labor market have also helped to bring down the share of workers who have been jobless for 27 weeks or more. In February that share was 31.1% versus 36.8% in February 2014 (not counting individuals who have given up looking for work). Over the year, the number of long-term unemployed persons has fallen by nearly 1.1 million. Since 1990, the percentage of long-term unemployed has averaged 25%, reaching as high as 45% in 2010. 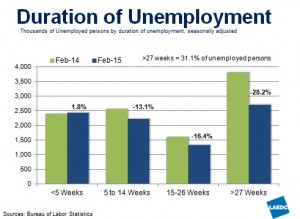 Summary: February was another month of solid, broad-based job, and sustained growth – good news for the economy. The gain in manufacturing jobs and the number of production hours worked was an indication of improving industrial production. There was a loss of 8,000 jobs in the mining sector, mostly in oil and gas extraction, a consequence of declining oil prices. While bad for the energy sector, the net impact of the decline in energy prices has proven to be more than sufficient to offset those losses and provide an overall boost to the economy. (Kimberly Ritter-Martinez)

Consumers Back Off on Auto and Student Loans

Total consumer credit outstanding (all non-mortgage debt) increased by 4.2% ($11.6 billion) over the month in January to $3.33 trillion (seasonally adjusted annualized rate). January consumer credit was revised up from a gain of $14.7 billion to $17.8 billion. Over the 12 months ending in January, total consumer debt was up by 6.9%. 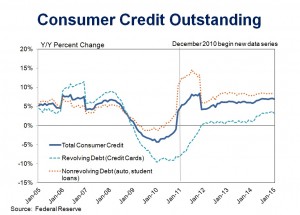 Non-revolving debt is composed primarily of credit for new automobiles and student loans, and makes up nearly three-quarters of non-mortgage consumer debt in the United States. In January, non-revolving debt grew to $2.44 trillion, an increase of 6.3% (or $12.7 billion) over the month. In December, growth in non-revolving debt was initially reported at 4.5%, somewhat below trend, but in the current report, the December growth rate was revised up to 5.8%. On average, this category of consumer debt has expanded by $15.5 billion per month over the last 12 months.

Revolving debt (mainly credit cards) contracted by 1.6% (-$1.1 billion) in January. In December, revolving debt increased at its fastest pace (8.4%) since April of last year. The prevailing pattern of revolving debt since the end of the recession has been a month or two of gains followed by a decline as consumers run up and then pay down their credit cards. Revolving credit tends to be volatile since it is often used for discretionary purchases and more readily impacted by swings in consumer confidence, employment reports and retail prices.

Consumer credit continues to expand at a steady pace and growth is expected to remain solid. Delinquency rates across all types of consumer loan types have continued to decline and remain low relative to the peaks reached in the aftermath of the last recession. Although, there is some concern that given the rapid expansion of student and auto loans, these sectors may be overextended. The ratio of debt-to-disposable income has also been rising steadily and now stands at 25.1%. The long-term average ratio going back to 1995 is 22.9%. (Kimberly Ritter-Martinez) 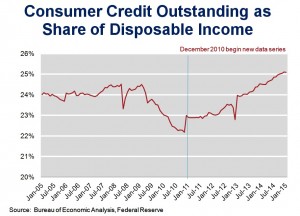 Light vehicle sales in February were up by 5.4% over the year to 16.2 million units (seasonally adjusted annualized rate), the slowest rate of increase since April 2014. On a per unit volume level, 1.25 million light vehicles were sold, a 5.4% increase compared with February last year when much of the nation was experiencing similar winter weather conditions. 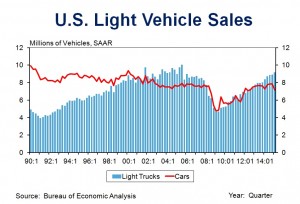 Total passenger car sales, including foreign and domestic models edged down by 1.6% to 7.0 million units. Sales of foreign models have been on a downward trend since July of last year, partially or completely offsetting increases in sales of domestic models.

Sales of light trucks, SUVs and crossover utility vehicles continue to be brisk in spite of moderate increases in the price of gasoline in February. Sales were up by 11.5% over the year to 9.1 million units and accounted for 56.6% of the sales mix, the highest since the share of light trucks peaked at 61.1% in July 2005.

Sale of medium-heavy trucks, used primarily by businesses to haul freight and make deliveries, posted another large gain last month, rising by 23.4% over the year in February to 453,000 vehicles.

The more moderate pace of sales in February was likely due regional weather effects. If so, the slowdown should reverse course as the automotive industry moves into the spring selling season. All the fundamentals supporting light vehicle demand (low fuel prices, available credit, expanding employment, and improvements in the construction industry) remain intact. (Kimberly Ritter-Martinez)

The Otis College of Art and Design and the LAEDC invite you to experience the 2014 Otis Report on the Creative Economy.

2014 Otis Report on the Creative Economy