Southern California home sales fell by 6.3% over the year in January to 13,560 units (new and resale houses and condominiums). Home sales have now posted year-over-year declines in 14 of the past 16 months.

Home sales also fell over the month, down by 29.4%. Although it is normal for sales to decline between December and January, the drop last month was slightly higher than trend. Since 1988 when this data series began, the December to January decline has averaged 27.6%.

The median price across Southern California increased by 7.6% to $409,000 over the year. The median price has risen on a year-over-year basis for 34 consecutive months, but the increase was less than half the 18.4% gain recorded a year ago January. The median peak for all of 2014 was $420,000 reached last August and the median price has not changed significantly since September 2014 when it was $413,000. In most years, the median price typically reaches its highest level during the peak season in the summer months and flattens out or edges down through February of the following year.

As of January, median prices in the Southland were 19.0% below the peak price of $505,000 reached in mid-2007. Unless supported by market fundamentals (job and income growth, sound lending practices), pre-crash prices are not necessarily the bench marks to shoot for. Much of the activity running up to 2007 was fueled by an overly lax lending market that gave loans to a large number of buyers who were not able to handle the debt load.

January and February generally are not very helpful at signaling the future direction of the housing market. A lot of buyers and sellers drop out of the market during the winter months, waiting out the holidays, preferring to buy in the spring and summer months so that moves occur after the end of the school year. The big question on everyone’s mind during this waiting period is whether price appreciation and other factors will finally release the pent-up supply of homes that this market needs in order to realize a full recovery. As prices continue to climb, more homeowners will gain sufficient equity to sell their home and trade up. Job gains and income growth along with low mortgage interest rates will continue to put upward pressure on prices unless the market sees a significant influx of inventory. (Kimberly Ritter-Martinez)

Retail sales in January were weaker than expected. Spending on U.S. retail and food services fell by 0.8% last month following a decline of 0.9% in December.

In January, six of the thirteen major sales categories posted a decline in sales over the month. Once again, the largest drop occurred at gasoline stations where sales fell by 9.3% because of lower fuel prices. If gasoline sales are excluded from the total January figure, retail sales were up by 0.2%.

However, it was not only gasoline sales that were weak in January. Sporting goods, hobby, book and music stores saw sales fall by 2.6%; sales at apparel and accessory retailers were off by 0.8%; furniture and home furnishings sales fell by 0.7%; sales at motor vehicles and parts dealers declined by 0.5%; and sales at food and beverage stores dipped by 0.3%.

On a year-over-year basis, total retail sales in January were up by 3.3%. Every major sector posted a gain over the last 12 months except for gasoline stations, which saw sales plummet by 23.5%. Again, if we were to remove gasoline sales from the mix, the year-over gain would have been 5.2%, the strongest year-over-year growth rate in nearly three years. The largest year-over gains were posted by restaurants and bars (11.3%); motor vehicles and parts (10.0%); and non-store (mostly e-commerce) retailers (8.3%). 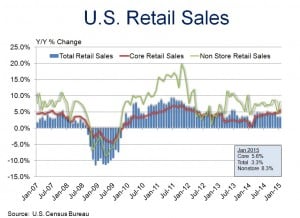 So far, lower gasoline prices do not appear to be translating into increased spending in other retail sectors. One reason for this may be that consumers are diverting a greater share of their earnings into savings, paying off holiday credit card balances, or spending more on things like housing or health care. Still, prospects for the retail sector look good. Buoyed by a strong job market and lower gasoline prices, we can expect to see stronger retail sales winter fades and spring approaches. (Kimberly Ritter-Martinez)

Consumers Back Off on Auto and Student Loans 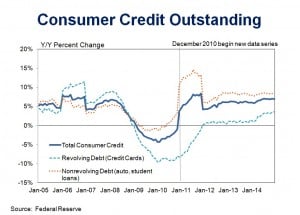 Non-revolving debt, which is primarily composed of credit for new automobiles and student loans, rose by 4.5% (or $8.9 billion), the slowest rate of growth almost three years. The average for this category over the previous 11 months was $15.9 billion so the December figure was somewhat below trend.

Looking ahead, strong job gains, rising wages and low inflation should boost consumer confidence and translate into greater buying power. The big question is whether or not consumers will choose to exercise that newfound power. Onesign that consumers are becoming more comfortable with increasing debt is the rising debt-to-disposable income ratio. In December, that ratio stood at 25.1%, above the long-run average ratio (since 1995) of 22.9%. (Kimberly Ritter-Martinez) 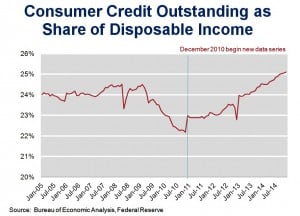 The Federal Reserve recently released results for the January 2015 Senior Loan Officer Survey on Bank Lending Practices. This survey addresses changes in the supply of, and demand for, bank loans to businesses and households during the past three months.

Recent data from the January survey painted a fairly positive picture of the nation’s loan markets. On balance, banks reported very little change in their standards for business and commercial real estate (CRE) loans while indicating demand for such loans increased only modestly over the last three months.

Asked about loans to households, several large banks reported having eased lending standards for a number of categories of residential mortgages including those eligible for purchase by government-sponsored enterprises. Most banks reported no change in standards and terms on other kinds of consumer loans (autos, credit cards). On the demand side, a modest number of banks reported weaker demand across most categories of home-purchase loans. In contrast, a modest fraction of large banks experienced stronger demand for auto and credit card loans.

Survey respondents were also asked about their expectations for loan delinquency and charge-off rates in 2015. Banks generally anticipate improvements in the performance of most kinds of loans this year but about one-third of the banks that make subprime auto loans expect delinquencies and charge-off rates to increase this year.

Changes in borrowing by businesses and consumers to finance investment and consumption are an indication of confidence levels and the relative strength of the economy. Banks in general have been easing lending standards for several years and demand has mostly trended upward since the end of the recession. Although the overall pace of improvement in the credit markets slowed during recent quarters, the trend on both the business and consumer sides remained positive. (Kimberly Ritter-Martinez)