The year-over-year change showed an increase 320,300 jobs (SA). This equated to a growth rate of 2.1%, matching the December national increase in nonfarm jobs. California’s private sector added 323,800 jobs (an increase of 2.5%) over the year, while employment in the public sector edged down by 0.1% (3,500 jobs). 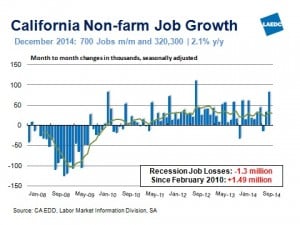 Eight of the 11 super-sectors added jobs over the year to December: mining and logging; construction; manufacturing; trade, transportation and utilities; information; professional and business services; educational and health services; and leisure and hospitality for a gain of 325,000 jobs. Professional and business services posted the largest gain on both a numerical and percentage basis, adding 110,900 jobs and increasing by 4.7%.

The three sectors that posted a decline in employment last month were financial activities (down 4,700 jobs); other services (1,000 jobs); and government (3,500 jobs). 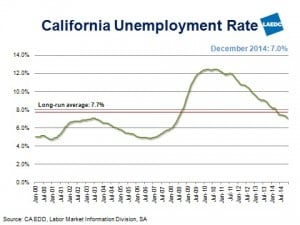 Educational and health services posted the largest year-over-year gain in December with an increase of 26,500 jobs. Most of the increase was due to the addition of 22,000 health care jobs over the past 12 months.

Also posting solid employment growth was professional and business services with a gain of 19,300 jobs. Breaking that down by subsector, administrative, support and waste services added 11,000 jobs, employment in professional, scientific and technical services increased by 5,100 jobs and management of companies and enterprises was up by 3,200 jobs. Leisure and hospitality added 11,300 jobs over the year, while trade, transportation and utilities employment was up by 11,000. 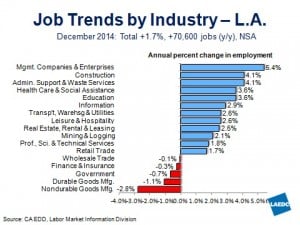 To sum up, the California labor market remained on track in December with the unemployment rate falling to 7.0%, the lowest in five and a half years. The state registered solid job gains for all of 2014, outpacing the nation in yearly percentage terms for the third straight year. Los Angeles County and the rest of the Southern California region finished the year with unemployment rates that improved considerably throughout 2014. Job gains occurred in a number of local industries, led by health care and social services, professional and business services, and leisure and hospitality. Local economic conditions should improve further in 2015, as the national economy continues to expand. (Kimberly Ritter-Martinez) 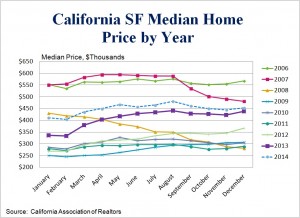 Statewide, the number of single-family homes that closed escrow in December edged up for the first time in nearly a year and a half. Home sales in California were up over the year by 0.6% to 366,000 units (seasonally adjusted, annualized rate), but were down from November by 2.9%. There were some pockets that saw sales gains in sales last year, notably the Central Valley and Southern California, but sales continued to trend down in the Bay Area where inventories are the tightest in the state. In December, the Bay Area had just a 1.7-month supply of homes for sale versus a 3.8-month supply (still low) in the Los Angeles metro area.

Here is a year-over-year summary of sales and price activity in Southern California by county. Sales results were mixed across the region while prices continued to climb.

How Much Does the United States Spend to Treat Different Medical Conditions?

Health care is a large and growing share of the U.S. economy – 17.4% of GDP in 2013. In order to provide more detail on this important sector, the Bureau of Economic Analysis (BEA) has developed the Health Care Satellite Account (HCSA). With this new account, BEA aims to improve the measurement of health care spending, and help researchers and policymakers better understand this sector’s spending and trends. Providing statistics for health care spending by disease is the first step in developing an account that would allow one to better assess the value in health care spending. 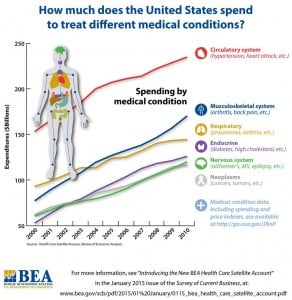