The Employment Development Department (EDD) released the state and local employment reports for the month of November. Total California nonfarm employment increased by 90,100 jobs over the month measured in seasonally adjusted (SA) terms. This followed a gain of 34,300 jobs (revised) in October. In nonseasonally adjusted terms, the state added 115,500 jobs last month, over half of which were in retail trade – a reflection of the strong seasonal factors affecting employment in this sector. 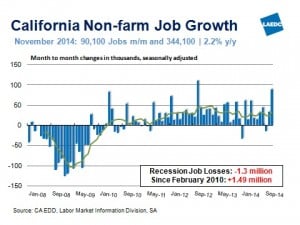 Nine of the 11 super-sectors added jobs over the year to November: mining and logging; construction; manufacturing; trade, transportation and utilities; information; financial activities; professional and business services; educational and health services; and leisure and hospitality for a gain of 348,100 jobs. Professional and business services posted the largest gain on a numerical basis, adding 119,400 jobs over the year (up by 5.1%). Construction posted the largest percentage gain, with the number of payroll jobs increasing by 6.3% (40.800 jobs).

The only two sectors to post a decline in jobs last month were government and other services, which gave up 600 jobs.

Educational and health services posted the largest year-over gain last month with an increase of 22,900 jobs. Accounting for 83% of that gain was health care and social assistance, which has added 19,000 jobs over the past 12 months.

Also posting solid employment growth was professional and business services with a gain of 21,800 jobs. Administrative, support and waste services expanded employment by 11,000 jobs, with most of the balance in professional, scientific, and technical services (7,800 jobs). Leisure and hospitality added 10,200 jobs over the year. 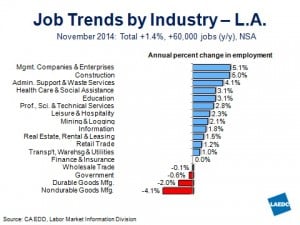 Summary: The California labor market accelerated in November, with the largest monthly job gain of any state. Momentum should continue into next year and help to bring down the state unemployment rate, which improved a great deal over the past year but is still quite high compared to the nation as a whole. (Kimberly Ritter-Martinez) 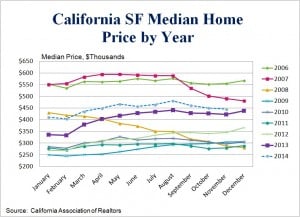 Statewide, the number of single-family homes that closed escrow in November was down by 3.4% over the year to 376,480 units (seasonally adjusted, annualized rate). Compared with October, sales fell by 5.3%.

Mortgage interest rates fell again in November, but did little to counter affordability concerns and boost sales among would-be buyers. The average 30-year fixed rate was 4.00%, down from 4.04% in October and 4.26% a year ago. In addition to declining affordability, the lack of inventory at the lower end of the price spectrum has also been an impediment, especially for first time buyers and younger households.

Here is a year-over-year summary of sales and price activity in Southern California by county. Sales were down across the region while prices continued to climb.

Personal income growth, which includes net earnings, property income and personal current transfer receipts, slowed in 38 states. The percent changes ranged from a decline of 0.2% in South Dakota (the only state with a decline ) to an increase 1.4% in Texas (seasonally adjusted quarterly rate). Personal income grew fastest in: Texas, New Mexico (1.3%), Utah (1.3%), Arizona (1.3%), and Nevada (1.2%).

California ranked twentieth with an increase of 1.0% compared with 1.4% in the second quarter. By income component, net earnings in California were up by 0.7%; dividends, interest and rental income grew by 0.9% and transfer receipts increased by 2.0%.

Health care earnings growth topped all other industries in 19 states, while gains in the professional services industry were the largest in eight states. Construction earnings contributed the most in three states. In Alaska, North Dakota, Oklahoma, Texas and Wyoming, the mining industry (which includes oil and gas extraction) contributed the most to third-quarter earnings growth.

Income growth, particularly gains in wages and salaries, has been weak through the recovery period, affecting consumer spending and impeding recovery in the housing market. Hopefully, the faster pace of job growth over the past year and further acceleration in 2015 will put upward pressure on wages, enabling households to increase spending and prompt additional economic growth. (Kimberly Ritter-Martinez)

Real spending on travel and tourism was up by 1.3% (seasonally adjusted annualized rate) during the third quarter. This followed an increase of 3.3% (revised up from 2.1%) in the second quarter. The Bureau of Economic Analysis tracks the travel and tourism industry in the United States because it is an important source of jobs and economic activity, particularly here in Southern California. Additionally, foreign visitors traveling to the U.S. are in important source of export revenue.

Spending on traveler accommodations jumped by 8.3%. Additional gains were recorded at restaurants and bars (4.4%), and tourism-related shopping (2.4%). Largely offsetting these advances, however, were declines in passenger air transportation (-7.2%), and recreation and entertainment (-5.5%).

Overall prices for travel and tourism goods and services edged up by just 0.6% in the third quarter after rising by 6.6% in the second quarter. There were some sectors that posted much stronger price gains: passenger air transportation (5.0%); restaurants and bars (3.0%); and shopping (2.2%). Elsewhere, there was sharp drop in “other” transportation-related commodities (-4.7%), which includes gasoline and rental cars.

The travel and tourism industry has been a source of steady job growth since the second quarter of 2010. Direct employment in this sector increased by 1.7% during the third quarter of 2014 after expanding by 1.9% in the previous quarter. Transportation employment rose by 2.9%; jobs at restaurants and bars also increased by 2.9%, while jobs in the recreation, entertainment and shopping sectors were collectively up by 0.9%. During the third quarter, nearly 5.5 million workers were employed in the U.S. travel and tourism industry, which equated to about four percent of all nonfarm payroll jobs in the U.S.
(Kimberly Ritter-Martinez) 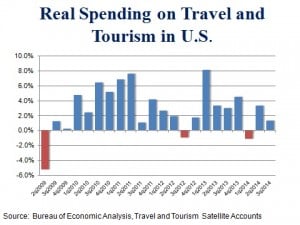 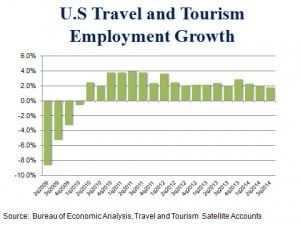