The U.S. Labor Market Report covering the national employment situation in November exceeded expectations. The labor market added 321,000 jobs last month, the largest monthly job gain in over two and a half years. The unemployment rate held steady at 5.8%. Average hourly earnings on private nonfarm payrolls were $24.66 in November, up by $0.09 from October. Over the year, average hourly earnings have risen by 2.1%, while the average workweek rose by 0.1 hour to 34.6 hours. Hourly earnings have only slightly outpaced inflation, which has averaged 1.7% YTD through October, but the increase in the number of hours worked is helping to boost weekly earnings.

The employer payroll survey reported that total nonfarm employment in the United States increased by 321,000 jobs in November. The change in September employment was revised up from 256,000 jobs added to 271,000, and the change in October was revised from 214,000 jobs to 243,000. With these revisions, employment gains in September and August were 44,000 more than previously reported. Incorporating these revisions, monthly job gains have averaged 241,000 year-to-date compared with the 204,000 monthly gain for the same period last year. 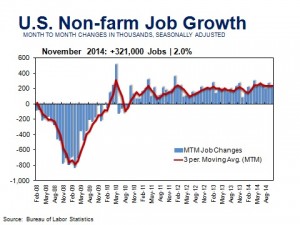 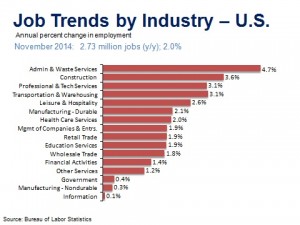 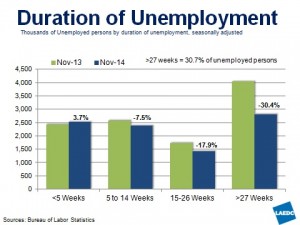 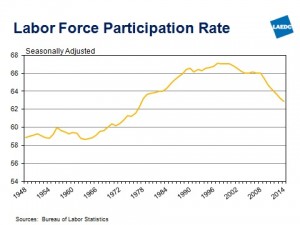 Summary: The November Labor Market Report was a good sign for the U.S. economy as the end of the year approaches. Economic growth during the last two quarters averaged 4.3%, and is expected to remain strong over the next four quarters. This should encourage more people to return to the labor force and step up pressure on wages and the number of hours worked. (Kimberly Ritter-Martinez)

Light vehicle sales in November were up by 5.5% over the year to 17.1 million units (seasonally adjusted annual rate), the fastest pace of growth since January 2006. On a per unit volume level, 1.3 million cars and light trucks were sold. This was the highest November volume reading in 13 years. 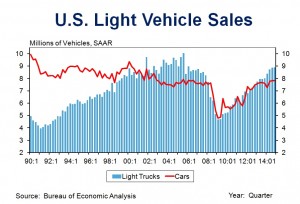 Declining fuel prices are boosting sales of foreign and domestic light trucks, especially crossover utility vehicles. Sales were up by 10.0% over the year to 9.2 million units and accounted for 54% of the sales mix last month (the long-run average is 51.4%). With gasoline prices expected to continue falling through 2015, light truck sales should maintain their current momentum. 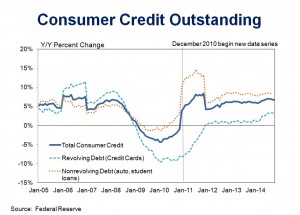 Non-revolving debt, which is primarily composed of credit for new automobiles and student loans, rose by 6.2% last month or $12.35 billion and by 8.1% over the year, consistent with recent growth rates. Auto lending has expanded very quickly in recent quarters, but a disturbing rise in default rates for auto loans could curb additional growth in the auto lending market if lenders tighten lending standards.

Revolving debt (mainly credit cards) expanded by 1.3% ($1.0 billion). Over the 12 months ending in October, revolving credit was up by just 3.1%. Consumers have been cautious in their use of credit cards to finance consumption since the onset of the recession, but with holiday retail sales expected to be up this year, shoppers may be more willing to use credit cards to support their holiday spending.

The growth of consumer credit in October fell somewhat short of expectations. Given the upward revision to economic growth from consumer spending in the third quarter, and the upward revision of October job counts in November’s Labor market report, the slower rate of credit expansion relative to recent months came as a surprise. Even so, consumer credit is growing at a healthy rate. On a year-to-year basis, consumer credit has expanded by an average of $18.1 billion per month compared to $14.5 billion and $14.0 billion in 2013 and 2012 respectively. (Kimberly Ritter-Martinez)