The Employment Development Department (EDD) released the state and local employment reports for the month of October. Total California nonfarm employment increased by 41,500 jobs over the month measured in seasonally adjusted (SA) terms. This followed a loss of 14,200 jobs (revised) in September. In nonseasonally adjusted terms, the state added 156,800 jobs last month, nearly half of which were in the government sector. 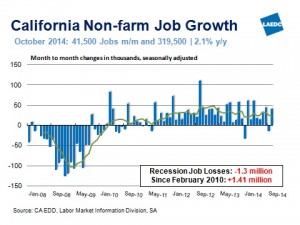 Ten of the 11 super-sectors added jobs over the year to October: mining and logging; construction; manufacturing; trade, transportation and utilities; information; professional and business services; educational and health services; leisure and hospitality; other services; and government for a gain of 324,200 jobs. Professional and business services posted the largest gain on a numerical basis, adding 106,400 jobs over the year (up by 4.5%). Construction posted the largest percentage gain, with the number of payroll jobs increasing by 5.3% (34,300 jobs).

The only sector to post a decline in jobs last month was financial services, which gave up by 4,700 jobs (-0.6%) over the year.

Professional and business services posted the largest year-over gain last month with an increase of 26,200 jobs. Half of those new jobs (13,100) were in administrative, support and waste services, with the balance in professional, scientific and technical services (9,800 jobs), and management of companies and enterprises (3,300 jobs).

Health care and social assistance added 19,200 jobs over the year, while retail trade increased by 9,000 jobs. Leisure and hospitality employment was up by 6,300 jobs; construction payrolls expanded by 5,000 jobs. Information added 5,900 jobs. Within the information sector, motion picture and sound recording added 5,700 jobs, an increase of 4.4% over the year.

Summary: Southern California’s labor markets continue to improve. Local unemployment rates are approaching long-run averages. The rate of job creation in many counties appears to be accelerating and if current trends remain intact, Southern California should recover all the jobs lost during the recession by mid-2015 – a milestone that is considerably overdue for the region. Health care, professional business services, and leisure and hospitality were among the region’s fastest growing employment sectors. (Kimberly Ritter-Martinez)

The California Association of Realtors released their report on California existing home sales and median prices in October. The statewide median price rose over the 12 months ending in October by 5.4% to $450,620. Compared with September, however, the median price declined by 2.3%. 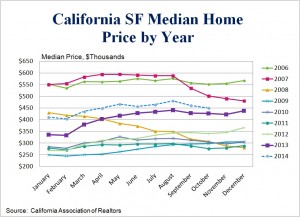 Statewide, the number of single-family homes that closed escrow in October was down by 1.9% over the year to 396,220 units (seasonally adjusted, annualized rate), but was unchanged over the month.

Mortgage interest rates fell again in October. The average 30-year fixed rate was 4.04%, down from 4.16% in September and 4.19% a year ago. October’s average rate was the lowest since May 2013 just prior to the Federal Reserve announcing its intention to begin tapering its bond-buying program. Unfortunately, many potential buyers have been unable to take advantage of current low interest rates, either because they cannot to come up with a down payment or because they are unable to qualify for a loan. A lack of inventory at the lower end of the price spectrum has also been an impediment, especially for first time buyers.

Here is a year-over-year summary of sales and price activity in Southern California by county. Sales were down across most of the region while prices continue to climb.

Pease join us at the Los Angeles Area Chamber of Commerce for our Doing Business in China, Japan and Korea conference. Our goal is to increase the amounts of food and food related products exported to these countries. We will be highlighting various trade and finance resources available to U.S. Exporters and their buyers in the Pacific Rim. This conference will feature Keynote Speaker, Ms. Holly Vineyard, International Trade Administration’s Deputy Assistance Secretary for Asia. Ms. Vineyard has an extensive history of working with U.S. companies to increase their international market share. Public and private sector speakers with many years of experience of working in not only Korea, Japan and China but the other countries throughout the Pacific Rim, will also be featured during the conference. This event is partially supported through a U.S. Department of Commerce, MDCP award.

CEDA Board Meeting Conference Call scheduled for Thursday, December 4, 2014 at 10:30am.

CEDA Board Meeting Conference Call scheduled for Thursday, December 4, 2014 at 10:30am.