Hit enter to search or ESC to close
CEQAFront Page

By Mariah AdedejiOctober 21, 2014 No Comments

Kinkisharyo had planned to build a permanent manufacturing facility in Palmdale that would have employed hundreds in a region that needs the skilled jobs.  Kinkisharyo, a Japanese company, is building light rail cars under contract with Metro to make the new Expo Line operational.  However, a labor union has blocked development in what some have called “greenmail,” which refers to the intentional misuse of CEQA as a tool to extract economic concessions from Kinkisharyo.  This is the latest call-to-action for CEQA reform to stop the abuse of the noble intent of CEQA.  For reasons largely unrelated to environmental concerns, CEQA continues to be used to block projects that would create jobs for Californians.  As a result, some businesses are choosing to avoid the risk of project delays and the threat of litigation by locating in other states, taking much needed jobs elsewhere. 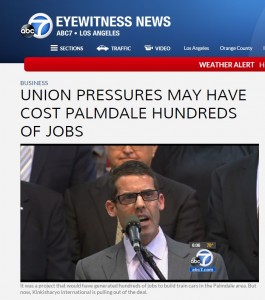