Eight of the 11 super-sectors added jobs over the year to September: mining and logging; construction; trade, transportation and utilities; information; professional and business services; educational and health services; leisure and hospitality; and other services for a gain of 308,200 jobs. Professional and business services posted the largest gain on a numerical basis, adding 102,000 jobs over the year (up 4.3%). Construction posted the largest percentage gain, with the number of payroll jobs increasing by 6.0% (38,300 jobs). 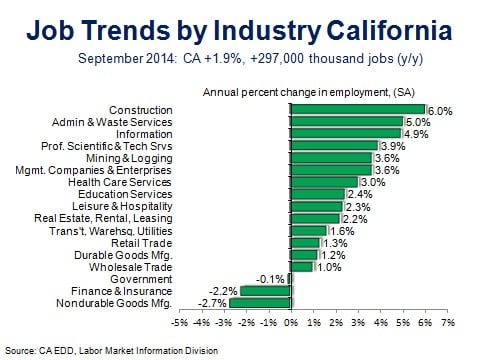 In addition to government, two other categories posted job declines over the year: manufacturing (-3,400 jobs) and financial activities (-5,600 jobs). 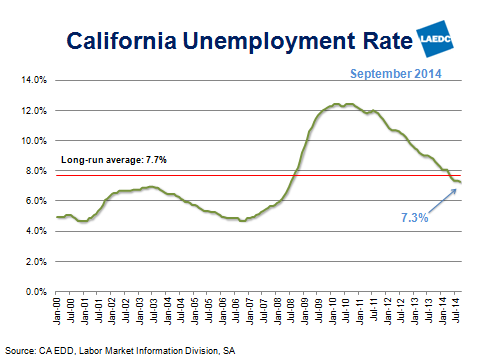 Summary: California’s private sector continues to show momentum, adding jobs in most industries, led by gains in health care, professional and business services, and construction. Southern California unemployment rates are near, and in some cases below, their long run averages. Although many industries have been adding jobs for quite some time, the region has not yet recovered all the jobs that were lost during the recession, so we continue to look for improvement going forward. (Kimberly Ritter-Martinez)

Retail Sales Turn Down in September

Eight of the 13 major sales categories recorded a decline in sales in September. The largest was clothing and clothing accessories stores (-1.2%). Non-store (vending machines, on-line) retailers and building supply centers both posted a decline of 1.1%. Elsewhere, sales fell by 0.8% at motor vehicle and parts dealers, furniture and home furnishings stores, and gasoline stations. The pullback in auto sales was the first decline in eight months, while the decline in gasoline sales was largely attributable to lower prices. Additionally, sales were down by 0.2% at miscellaneous store retailers and by 0.1% at sporting goods, hobby, book and music stores.

In spite of the overall decline, four sectors experienced an increase last month. Sales at electronics and appliance stores jumped by 3.4% (reflecting in large part the introduction of the new iPhone 6). Posting more modest increases, food services and drinking places were up by 0.6%; health and personal care stores rose by 0.3%, and general merchandise stores increased by 0.2%. Sales were flat at food and beverage stores.

On a year-over-year basis, total retail sales in September were up by 4.3%. The best performing sectors continue to be: motor vehicles and parts (9.5%); food services and drinking places (7.1%); health and personal care stores (6.0%) and non-store retailers (5.4%). The only major sector to post a year-over-year decline in sales was gasoline stations (-2.5%); and although sales at general merchandise stores rose by 2.7% over the year, the subsector department stores, posted a decline of 0.8%. 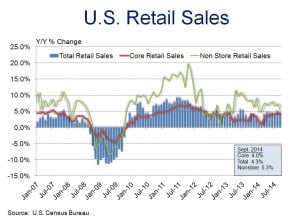 This was a disappointing report, but real consumer expending is still expected to be somewhere in the neighborhood of 1.8% to 2.3% in the third quarter, and 2.5% in the fourth. The increased pace of employment growth and soft inflation readings should support additional disposable income growth. Moreover, forecasts for the shopping holiday season are calling for much stronger sales than were posted last year. (Kimberly Ritter-Martinez)

CEDA Board Meeting Conference Call scheduled for Thursday, October 23, 2014 at 10:30am

CEDA Board Meeting Conference Call scheduled for Thursday, October 23, 2014 at 10:30am