The Employment Development Department (EDD) released the state and local employment reports for the month of August. Total California nonfarm employment increased by 44,200 jobs over the month measured in seasonally adjusted (SA) terms. This followed a gain of 31,500 jobs (revised) in July. 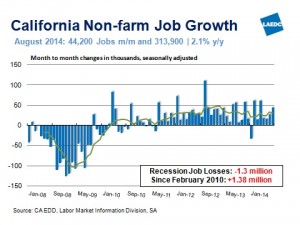 Nine of the 11 super-sectors added jobs over the year to August: mining and logging; construction; trade, transportation and utilities; information; professional and business services; educational and health services; leisure and hospitality; other services; and government for a total gain of 322,800 jobs. Professional and business services posted the largest gain on a numerical basis, adding 93,000 jobs over the year (up 4.0%). Construction posted the largest percentage gain, with the number of payroll jobs increasing by 5.6% (35,600 jobs). 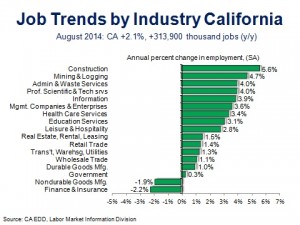 Summary: The California labor market continues to improve. At 15,539,600 jobs, the number of wage and salary jobs in the state surpassed the pre-recession peak of 15,449,800 reached July 2007 for the third month in a row, exceeding the previous peak by 89,800 jobs. In August, California also had the largest monthly job gain of any state in the nation. The Southern California Labor markets have seen significant decreases in unemployment rates with health care, professional business services, and leisure and hospitality leading in job growth. (Kimberly Ritter-Martinez)

The California Association of Realtors released their report on California existing home sales and median prices in August. The statewide median price rose over the 12 months ending in August by 8.9% to $480,280, the highest recorded since 2007. The median single-family home price in California has now risen on a year-over-year basis for 30 months.

Conversely, California home sales continued to decline. Although the level of August sales was the second highest recorded so far this year, the number of single-family homes that closed escrow last month fell by 9.3% to 394,280 units (seasonally adjusted, annualized rate) compared with the same period last year. As of August, home sales across the state have declined on a year-over-year basis for over a year (13 months).

The inventory situation continues to improve. In August, there was a 4.0-month supply of unsold homes in California compared with 3.0 months a year ago. The inventory situation in Los Angeles County mirrored statewide conditions. Last month the supply of unsold homes in the county was also 4.0 months versus 2.9 months a year ago.

As a result of rising prices, more people are in a position to list their homes for sale, which has helped increase inventory. On the other hand, in spite of low interest rates, higher prices are also creating affordability issues for many potential buyers, especially first timers.

Here is a year-over-year summary of sales and price activity in Southern California by county. Sales were down across the region; prices continue to climb.

U.S. exports increased by $1.8 billion from $196.2 billion in June to $198.0 billion in July, due mainly to a rise in foreign demand for U.S. automotive vehicles, parts and engines, followed by capital and consumer goods. On a year-to-year basis, U.S. exports of goods were up by 4.5% with gains across the board.

U.S. imports increased by $1.6 billion to $238.6 billion in July, up from $237.0 billion in June. The monthly rise in imports of goods (imports of services remained unchanged) was due in large part to a strong demand for foreign autos and auto parts. Auto imports saw a record high in July and while oil imports also increased, oil imports have trended lower over the last few years. That trend is likely continue as the U.S. works toward less reliance on foreign oil. When compared with July last year, U.S. imports were up by 4.3%.

Following on a significant drop in the in June’s trade deficit, the additional (although smaller) decline in July indicates trade should bump up third quarter growth. Exports will likely provide only a modest boost — Europe is struggling and accounts for 20% of American exports. Meanwhile, imports should continue to grow due to strong domestic demand. (George Entis)

U.S. Travel and Tourism Spending Turns Up in 2Q14

Real spending on travel and tourism was up by 2.1% (seasonally adjusted annualized rate) during the second quarter. This followed a decline of 1.1% in the first quarter. Real gross domestic product also turned up in the second quarter, rising by 4.2%, after decreasing by 2.1% in the first quarter. The Bureau of Economic Analysis tracks the travel and tourism industry in the United States because it is an important source of jobs and economic activity, particularly here in Southern California. Additionally, foreign visitors traveling to the U.S. are an important source of export revenue. 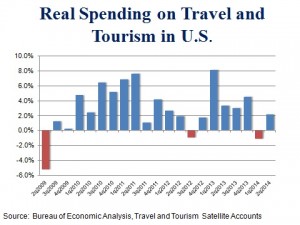 Total direct spending on travel-related goods and services was $775.9 billion during the second quarter of this year compared with $771.1 billion in the previous quarter. Spending on passenger air transportation jumped by 10.0%; food services and drinking places expenditures increased by 6.5%; recreation and entertainment was up by 7.3% and shopping increased by 2.1%. These more than offset declines in traveler accommodations (-0.8%) and other transportation-related commodities (-5.3%). 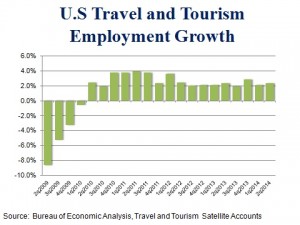 The travel and tourism industry has been a source of steady job growth since the second quarter of 2010. Direct employment in this sector increased by 2.3% during the second quarter of 2014 after expanding by 2.1% in the previous quarter. Employment at food and drinking places rose by 3.5%, while transportation payroll jobs increased by 2.7%. Travel-related shopping jobs grew by 1.5%, accommodations rose by 1.1% and recreation and entertainment employment expanded by 0.8%. During the second quarter, nearly 5.5 million workers were employed in the U.S. travel and tourism industry, which equated to about 4% of all nonfarm payroll jobs in the U.S. (Kimberly Ritter-Martinez)

Growth Continues at the Ports in August

The total number of containers handled at the ports of Long Beach and Los Angeles in August decreased by 0.7 percent on a year-over-year basis to 1,330,785 TEUs (twenty-foot equivalent units). This was the seventeenth consecutive month of at least 1 million TEUs for the San Pedro Bay ports.