By Adam WeissSeptember 8, 2014 No Comments

The U.S. Labor Market Report covering the national employment situation in August was released this past Friday. The unemployment rate edged down to 6.1%, and the U.S. economy added 142,000 jobs over the month. This was a significant slowdown from the job growth we have seen over the previous six months, but other labor market indicators point to a stronger job market than the August numbers suggest.

The employer payroll survey reported that total nonfarm employment in the United States increased by 142,000 jobs in August. The change in July employment was revised up from 209,000 jobs added to 212,000, but the change in June was revised down from 298,000 to 267,000. With these revisions, employment gains in July and June were 28,000 jobs less than previously reported. Incorporating these revisions, monthly job gains have averaged 215,000 year-to-date. Over the 12 months ending in August, the average monthly gain was 207,000. 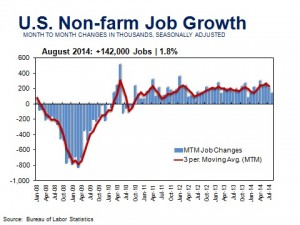 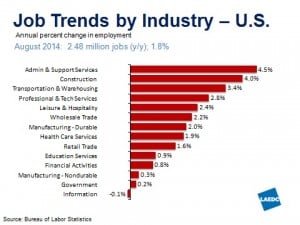 The unemployment rate (measured using a separate household survey), edged down in August from 6.2% to 6.1% in July, mostly due to a slight decline in the labor force. A year ago, the unemployment rate stood at 7.2%. The more comprehensive U-6 rate was 12.0% last month, which was down from 13.6% in August 2013. This rate includes discouraged workers and part-time workers who would like to work full time.

The number of people working part time because of slow business conditions or part-time was the only work they could find, fell by 7.9% over the year to 7.3 million. There were also 19.5 million people working part-time for non-economic reasons (e.g. school, retirement, childcare problems, family obligations).

Summary: Job growth over the last several months has been solid. August was likely more of a hiccup than a change in trend. There were new record high levels of employment last month in mining and logging; professional and business services, education and health; and leisure and hospitality. Other economic and labor market indicators also point to stronger underlying growth. Claims for unemployment insurance have been low, surveys of hiring expectations have been good, and average hourly earnings are increasing (2.1% over the year). (Kimberly Ritter-Martinez)

Light vehicle sales were up over the year in August by 9.9% to 17.4 million units (seasonally adjusted annual rate), reaching their highest level since January 2006 when sales were 17.5 million vehicles.

Total passenger car sales, including foreign and domestic models, rose by 6.1% to 8.2 million units. For the second month in a row, the increase in passenger car sales was entirely the result of stronger sales of vehicles manufactured in the United States.

Combined sales of foreign and domestic light trucks climbed by 13.6% over the year, rising to 9.2 million units. Light trucks accounted for 52.8% of total vehicle sales last month, slightly above the long-run average of 51.1%.

Sales of medium-heavy trucks, used primarily by businesses to haul freight and make deliveries, gained momentum in August, shooting up by 27.6% over the year to 444,000 units.

Sales are on track to exceed 16 million this year for the first time since 2007. Between 1999 and 2007, auto sales in the U.S. regularly topped 16 million units. Affordable interest rates, attractive incentives and a desire to replace older vehicles (including a large number coming off leases) are boosting demand for new cars and trucks. Add rising consumer confidence and falling fuel prices to the mix and the result is a buying environment that has consumers flocking to dealer showrooms. (Kimberly Ritter-Martinez) 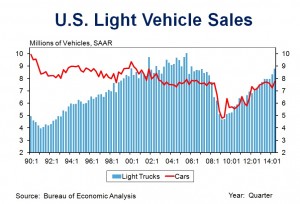