The Employment Development Department (EDD) released the state and local employment reports for the month of July. Total California nonfarm employment increased by 27,700 jobs over the month in July measured in seasonally adjusted (SA) terms. This followed a gain of 16,200 jobs (revised) in June. 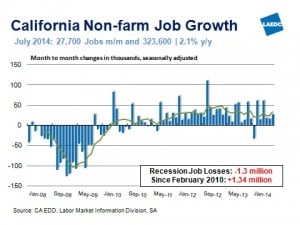 Nine of the 11 super-sectors added jobs over the year to July: mining and logging; construction; trade, transportation and utilities; information; professional and business services; educational and health services; leisure and hospitality; other services; and government for a total gain of 336,300 jobs. Professional and business services posted the largest gain on a numerical basis, adding 91,800 jobs over the year (up 3.9%). Information posted the largest percentage gain for the second consecutive month, with the number of payroll jobs increasing by 4.1% (18,400 jobs). Similar to last month, the bulk of new jobs created in the information sector were in motion picture and sound recording industries. 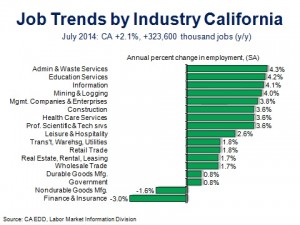 Professional and business services posted the largest year-over gain last month with an increase of 27,600 jobs. The majority of those new jobs (13,900) were in professional, scientific, and technical services; 10,600 were in administrative, support and waste services, and 3,100 new jobs were added in the management of companies and enterprises sector.

Educational and health services payrolls increased by 18,800 jobs over the year. Much of the job growth in this sector was attributable to an increase in health care and social assistance, which was up by 15,800 jobs. Employment in retail trade expanded by 9,700 jobs, while leisure and hospitality employment increased by 8,600 jobs, of which, 7,600 were in restaurants and bars. Construction employment was up by 7,700 jobs, and motion picture and sound recording posted an increase of 7,400 jobs. 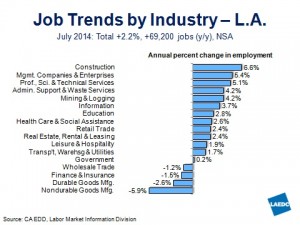 Summary: The California labor market continues to improve. At 15,492,500 jobs, the number of wage and salary jobs in the state surpassed the pre-recession peak of 15,449,800 reached July 2007 for the second month in a row, exceeding the previous peak by 42,700 jobs. The Southern California Labor market also continues to improve with health care, professional business services, and leisure and hospitality leading the region’s industries in term of year-to-year job gains. (Kimberly Ritter-Martinez)

Southern California home sales in July totaled 20,369 units (new and resale houses and condominiums), a decline of 12.4% compared with the same period last year. Sales throughout the six-county region have now fallen on a year-over-year basis for 10 consecutive months. The pace of home sales last month was the slowest for the month of July in three years and was 19.4% below the average level of sales for July.

The median price across Southern California increased by 7.3% to $413,000 over the year but was down from $415,000 in June, which was the highest median price since January 2008 when it was also $415,000. The year-over-year gain, however, was the slowest recorded since June 2012, and July was the first month in two years when all but one of Southern California’s counties failed to post a double-digit price increase.

The number of homes for sale continues to fall short of demand, which is one of the main reasons why prices continue to rise, but the rate of increase has slowed considerably. Many potential buyers are held back by a relatively conservative lending environment and wage growth that falls far short of the run-up in home prices. After 22 months of double-digit prices gains ended in June, Southern California’s housing market recovery continues to unfold, but going forward much will depend on wage growth, mortgage interest rates and an increased willingness on the part of lenders to make loans. (Kimberly Ritter-Martinez)

After five consecutive months of steady gains, total U.S. retail and food services sales remained unchanged over the month in July. Core retail sales, however, still managed to carve out a gain of 0.1%. Core retail sales, which exclude automobiles, gasoline stations, and building and garden supply centers, are an important indicator of consumer activity because they align more closely with the measure of personal consumption expenditures the BEA uses to calculate GDP. 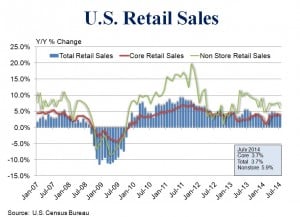 Five of the 13 major sales categories recorded a decline in July. General merchandise stores (including department stores) posted the largest month-over decline (-0.5%). Motor vehicle sales, which have provided a much needed boost to consumer spending over the last several months, also hit the brakes in July, declining by 0.2%. Appliances and electronics, and home furnishings each posted additional declines of 0.1%. Non-store retailers (on-line, catalogue and vending machines) recorded a rare drop last month as well (-0.1%). Non-store retailers, or more precisely the e-commerce portion of non-store retailers, have been a steady source of retail sales growth since the end of the recession. 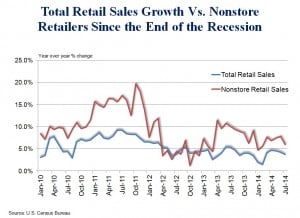 On a year-over-year basis, total retail sales in July were up by 3.7%. The best performing sectors were restaurants and bars (6.2%); automobiles and parts (6.0%); non-store retailers (5.9%); and building supply centers (5.1%). The only major sectors to post a year-over decline in sales were sporting goods, books, music and hobbies (-2.3%) and gasoline stations (-1.2%). While general merchandise stores posted sector-wide increase of 1.1%, sales at department stores (a major component of this category) fell over the year by 3.0%.

Although retail spending in July was a disappointment, consumer spending over the next several quarters is still expected to be somewhere in the neighborhood of 2.0 to 2.5%. However, in the absence of significant and sustained growth in real wages, many American households will continue to approach discretionary spending with caution. (Kimberly Ritter-Martinez)

The Los Angeles Tourism and Convention Board (LATCB) Market Outlook Forum is the strategic forecasting conference for any business interested in capitalizing on L.A.’s record tourism growth. Los Angeles welcomed a record 42.2 million visitors from around the globe in 2013, making it one of the most-visited destinations in the U.S., and forecasts call for continued growth with 50 million visitors by 2020. This valuable event will help you prepare to welcome them and benefit from the tremendous anticipated growth in visitation.