The Employment Development Department (EDD) released state and local employment reports for the month of June. Total California nonfarm employment increased by 24,200 jobs over the month in June measured in seasonally adjusted (SA) terms. This followed a gain of 18,900 jobs (revised) in May. 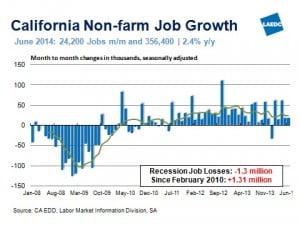 The year-over-year change showed an increase of 356,400 jobs (SA). This equates to a growth rate of 2.4%. California is continuing to add jobs at a faster rate than the nation as a whole. In June, the national year-over-year employment growth rate was 1.8%. California’s private sector added 344,800 jobs (an increase of 2.7%) over the year, while employment in the public sector rose by 11,600 jobs (0.4%).

Nearly every major private industry sector added jobs over the year: mining and logging; construction; trade, transportation and utilities; information, professional business services; educational and health services; leisure and hospitality; and other services for a total gain of 369,200 jobs. Educational and health services combined posted the largest gain on a numerical basis, adding 103,400 jobs over the year (up 4.5%). Information posted the largest percentage gain, with the number of payroll jobs increasing by 5.1% (22,800 jobs). The bulk of new jobs created in the Information industry were in motion picture and sound recording industries. 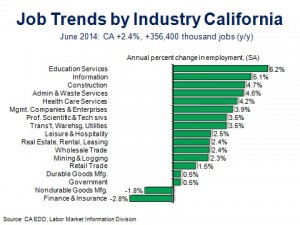 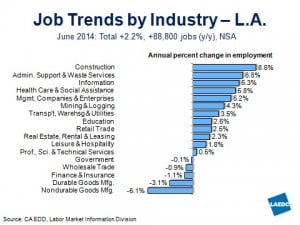 Summary: California’s economy has added jobs steadily since the start of the year and continues to outpace the nation in yearly percentage gains. As a result, the state has narrowed the gap between the unemployment rate in California and the national rate. Job gains were broad, with record high employment levels in professional, scientific and technical services, health care, and leisure and hospitality. (Kimberly Ritter-Martinez)

U.S. Trade Deficit Narrows in May Due to Record High Exports

The U.S. Commerce Department reported that the U.S. trade deficit declined to $44.4 billion in the month of May, down from a revised $47.0 billion in April. Overall imports fell slightly in May while exports witnessed a record high on a monthly basis. However, it is important to point out that similar to exports, non-petroleum imports actually experienced a record high in May. When comparing May 2013 to May 2014, the trade deficit was just barely lower (from $44.8 billion to $44.4 billion).

U.S. exports increased by $2.0 billion from $193.5 billion in April to $195.5 billion in May, due mainly to a rise in foreign demand for U.S. automotive vehicles, parts and engines, other goods and consumer goods (diamond and cell phones). On a year-to-year basis, U.S. exports were up by 4.4% as increases occurred in foods, feeds and beverages, petroleum products, and consumer goods.

U.S. imports slightly declined by $0.7 billion to $239.8 billion in May, down from $240.5 billion in April. The monthly drop in imports mainly reflected the lower U.S. demand for foreign oil. When compared to last year, U.S. imports jumped by 3.4%.

Bottom Line: A decline in U.S. exports was one of the key drivers of overall GDP weakness during the first quarter. Noting that imports subtract from GDP and exports positively contribute to GDP, trade essentially reduced GDP by 1.5 percentage points in the first quarter of this year.

The decline in the trade deficit in May will positively impact U.S. economic growth in the second quarter of 2014. However, the record high in imports (when excluding petroleum) points in a different direction as we look towards the June figures unless exports can reach new record highs as well. (Ferdinando “Nando” Guerra)

Southern California home sales in June totaled 20,654 units (new and resale houses and condominiums), a decline of 4.4% compared with the same period last year. Sales throughout the six-county region have now fallen on a year-over-year basis for nine consecutive months. The pace of home sales last month was the slowest for the month of June in three years. Home sales have not been above the long-term average for any given month in eight years.

The median price across Southern California increased by 7.8% to $415,000, the highest median price since it was $415,000 in January 2008. However, June’s year-over increase was the lowest since June of 2012 and ended 22 straight months of double-digit price gains. Pent up demand, job growth and low interest rates are still exerting upward pressure on median prices, but the rate of increase has slowed over the past several months to a more sustainable pace. The decline in affordability is starting to act as a weight on home prices – income growth has not kept pace with price increases and buyers are no longer able to use risky loans to extend their buying power like they could prior to the financial crisis.

There are a number of other indicators that point to the return of a more normal housing market. The use of larger loans (sometimes referred to as “jumbo”) is up this year as are adjustable rate mortgages. Distressed property sales are down, and investor and cash purchases continue to decline. The supply of homes for sale, while still low by historical standards, is also improving. (Kimberly Ritter-Martinez)

Total U.S. retail and food services sales increased by 0.2% in June (seasonally adjusted) after rising by 0.5% in May. Retail sales have now increased for five consecutive months. Core retail sales, which exclude automobiles, gasoline stations, and building and garden supply centers, increased by 0.5%. Core retail sales is an important indicator because it aligns more closely with the measure of personal consumption expenditures the BEA uses to calculate GDP. The stronger core reading points to more robust consumer spending in the second quarter.

Vehicle sales and home improvement centers were a drag on total retail sales in June but the overall gain was broad based. The strongest performing sector was general merchandise stores, which reported sales were higher by 1.1% higher over the month. Following were health and personal care stores, and non-store retailers, both of which recorded an increase in sales of 0.9%. Other sectors posting increases were apparel (0.8%); sporting goods, hobby, book and music stores (0.6%); food and beverage stores (0.4%); gasoline stations (0.3%); electronics and appliance stores (0.1%); and miscellaneous store retailers (0.1%).

After being a primary driver of retail sales for most of this year, automobile sales declined by 0.3% last month as did sales at restaurants and bars. Sales of furniture stores dipped by 0.1%, while building material and garden supply centers experienced a drop in sales of 1.1%.

On a year-over-year basis, total retail sales in June were up by 4.3%. The best performing sectors were non-store retailers (8.1%); health and personal care stores (7.9%); motor vehicles (6.4%): and restaurants and bars (5.6%). The only major sector to post a year-over sales decline was the sporting goods, hobby, book and music store sector (-2.0%).

Looking ahead, ongoing improvements in the labor markets will continue to support higher retail sales and stronger consumer spending throughout the next quarter. (Kimberly Ritter-Martinez) 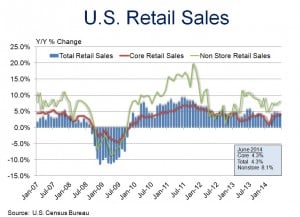