Personal Income Up in May; Consumption Falters

Total personal income increased by 0.4% in May after rising by 0.3% in April. Total private wages and salaries were up by 0.4% ($29.2 billion) over the month. Wages in goods producing industries jumped by 0.6%, while wages in service providing industries increased by 0.4%. Wages and salaries in the public sector were up by 0.1%. Government transfers (social security, Medicare, Medicaid, unemployment insurance, veterans’ benefits) also rose by 0.4% or $10.5 billion.

Although real disposable income (income after taxes and adjusted for inflation) increased by 0.2% in May, real consumer spending dipped by 0.1% over the month. This followed a decline of 0.2% (revised) in April. Real personal consumption of durable goods (driven almost entirely by automobile purchases) increased by 1.0% but was offset by a 0.3% decline in spending on nondurable goods and 0.2% on services.

Less spending and higher incomes last month translated to a higher personal saving rate. The saving rate (as a percentage of disposable personal income) increased to 4.8% in May from 4.5% in April. A higher saving rate and a slight increase in credit card usage may lead to an increase in consumer spending during the months ahead, but Americans seem to be holding back. Expectations for higher gasoline prices and unsettling news from around the world may be factors.

Overall, state personal income increased by 0.8% during the first quarter of 2014 (seasonally adjusted, quarter-to-quarter). Personal income grew in 46 states. Washington, Vermont and West Virginia were the fastest growing at 1.4%. Personal income fell by 2.9% in North Dakota, 0.3% in South Dakota and 0.2% in Arkansas and Nebraska. California ranked 43rd among the states with an increase 0.3%. (Kimberly Ritter-Martinez)

In spite of the quarter-to-quarter decline, California tax revenue collections are coming in at or slightly ahead of projections. According to the State Controller’s office fiscal year-to-date (through May), the state’s leading three revenue sources ran $1.3 billion ahead of projections, while total revenues exceeded expectations by $1.8 billion. (Kimberly Ritter-Martinez)

The Bureau of Economic Analysis tracks the travel and tourism industry in the United States because it is an important source of jobs and economic activity, particularly here in Southern California. Additionally, foreign visitors traveling to the U.S. are a significant source of export revenues.

Total direct spending on travel-related goods and services was $772.1 billion during the first quarter of this year compared with $774.1 billion in the previous quarter. The decline was attributable a drop off in spending on recreation and entertainment (-11.2%); food services and drinking places (-3.5%) and passenger air transportation (-1.5%). Partially offsetting the declines was growth in traveler accommodations (2.3%); other transportation (2.1%); and shopping (0.3%).

Overall prices for travel and tourism goods and services were up by 2.3% in the first quarter after remaining mostly flat during the final quarter of 2013. Rising by 13.2%, higher prices for traveler accommodations were primarily responsible for the general uptick. Travelers also paid more for restaurant meals, entertainment, recreational activities and spent more at retail outlets. In contrast, prices for passenger air transportation fell by 5.5%.

The travel and tourism industry has been a source of steady job growth since the second quarter of 2010. Direct employment in this sector increased by 2.1% during the first quarter of 2014 after expanding by 2.7% in the previous quarter. Transportation employment was up by 3.2%, while the number of travel-related recreation and entertainment jobs expanded by 3.1%. Payrolls at restaurants and bars increased by 2.4%, retail employment was up by 1.0%; accommodations employment ticked up 0.6%. During the first quarter, over 5.4 million workers were employed in the U.S. travel and tourism industry, which equated to about 4% all nonfarm payroll jobs in the U.S. (Kimberly Ritter-Martinez) 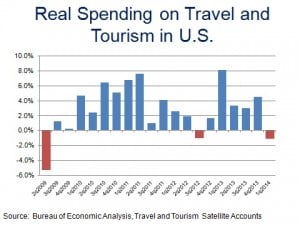 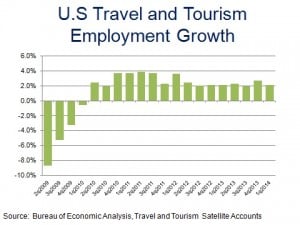