Hit enter to search or ESC to close
Front PageNewsResearch 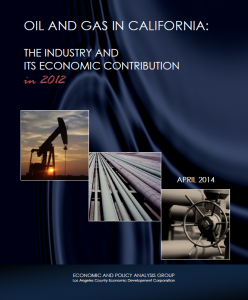 The Western States Petroleum Association (WSPA) commissioned the Los Angeles County Economic Development Corporation (LAEDC) to study the economic contribution of the oil and gas industry in California for the year of 2012.  This report, published in April 2014, is one of the many objective, custom economic reports that are produced by LAEDC’s Economic and Policy Analysis team.  The report describes the economic impact of oil and gas industry operations in their entirely for the state of California, and estimates that the industry generated more than $220 billion in direct economic activity, contributing 5.4 percent of the state’s GDP, and supported 468,000 jobs in 2012, or 2.3 percent of California’s employment. Additionally, the petroleum industry generated $21.6 billion in state and local tax revenues and $14.7 billion in sales and excise taxes.

Read more in the complete report.