Hit enter to search or ESC to close
News

Blackstone Launchpad to Support Next Gen of Entrepreneurs 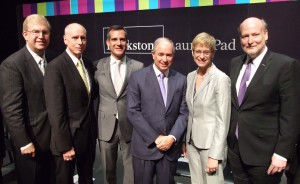 Bill Allen, President and CEO of LAEDC describes what makes the program unique: “Blackstone LaunchPad is bringing together three anchor institutions in Southern California, USC, UCLA, and UC-Irvine, who will not only offer programs on their campuses for their collective 110,000 students, but will connect to each other and share resources so that students can meet each other across universities and across regions, and connect with a broader venture coaching community.  As regional partner for Blackstone, LAEDC will steward and coordinate the program.”

Allen continued, “LaunchPad will establish a  vibrant, interconnected innovation ecosystem for the SoCal area, and we can connect with 11 other universities in five other states who are doing this, enabling us to learn from their best practices.  Students, regardless of their major, can pursue support for their entrepreneurial dreams.  We believe this program will encourage these young entrepreneurs to create vibrant enterprises and jobs that will contribute to the future of the Los Angeles region.”

Blackstone LaunchPad California will foster connectivity between the university campuses, business community, and local entrepreneurs to create an environment that nurtures students and provides them the skills and network necessary to succeed as entrepreneurs. With a physical presence on each university campus, Blackstone LaunchPad has the potential to generate some 1,400 new ventures in California over the next five years.

“When you nurture talent and support aspiring entrepreneurs, you foster the creation of innovations that have the ability shift paradigms,” said Blackstone’s Chairman, CEO, and Co-Founder Stephen A. Schwarzman. “Through Blackstone LaunchPad, students have access to the right tools to take their ideas to market, and to truly become successful entrepreneurs with their ventures rooted in California, ultimately strengthening the local economy.”

Blackstone LaunchPad is modeled after a successful program developed at the University of Miami in 2008, which has generated 1,703 business proposals, 559 new jobs and drawn over 3,600 participants since its establishment. Each regional program established through the Blackstone Charitable Foundation is linked together, drawing ideas and best practices from across 11 campuses, giving student entrepreneurs in southern California access to a national community of over 350,000 of their peers and expert advisers.

Funding for this program is made possible through The Blackstone Charitable Foundation’s $50 million, five-year Entrepreneurship Initiative, which seeks to target support services regionally for aspiring entrepreneurs creating the high-growth ventures that are known to spark economic growth. Due to the early success of the program following its implementation in Michigan, The Blackstone Charitable Foundation was recognized by President Obama’s “Startup America” Initiative and pledged to expand LaunchPad to five new regions over five years. This expansion to southern California fulfills that pledge.

What They Are Saying: A Quote Roundup:

Lieutenant Governor Gavin Newsom said, “California is at the forefront of building the economy of the 21st Century.  This economy will be based on the ideas and innovations of entrepreneurs who create their businesses through programs like Blackstone LaunchPad.  The LaunchPad entrepreneurship program encourages and guides students on how to transform bold ideas into businesses and careers, lighting the way for entrepreneurs to create jobs and grow the economy.”

Representative Xavier Becerra, Chairman of the House Democratic Caucus, said, “Helping entrepreneurs succeed is critical for growing our economy and creating jobs here in California and across America. A program like Blackstone LaunchPad will give our aspiring, local entrepreneurs the expertise and encouragement they need to get their ideas off the ground and create the businesses of tomorrow. The Southern California region has always been a place of great innovation and I am glad our students will have greater opportunities to unleash those next big ideas and spur local economic growth.”

Los Angeles Mayor Eric Garcetti said, “On behalf of the City of Los Angeles, I’d like to commend Stephen Schwarzman and the Blackstone Charitable Foundation for making this significant investment in our city’s future.  I’m focused on improving LA’s economy and helping our graduates start companies here, and I’m excited this program can give young Angelenos the skills they need to achieve their dreams in LA.”

Gene Block, Chancellor of The University of California, Los Angeles, said, “UCLA is proud to be partnering with the Blackstone LaunchPad California initiative to advance the emerging entrepreneurial landscape of the region and the state as a whole.  As one of the nation’s top research universities, and one with a very public mission, UCLA has a vital role in promoting entrepreneurship in the communities we serve. We look forward to collaborating with our partners in making this initiative a huge success.”

Michael V. Drake, President of The University of California, Irvine, said, “We have seen firsthand the power that creative minds and the entrepreneurial spirit can exert in transforming a community.  Public/private partnerships such as this allow us to continue to innovate as we move forward.  Our students will now have the structure in place to transform an idea into a plan, and then move that plan to reality.”

Elizabeth Garrett, Provost and Senior Vice President for Academic Affairs, University of Southern California, said, “Blackstone LaunchPad fosters the talent, courage and curiosity that we value in student entrepreneurs at USC and across our partner institutions. The expanded access and flexibility afforded by this program, in association with the Annenberg Innovation Lab, will provide a strong foundation for creating new ventures that enhance both our academic community and the Southern California region.”

Donna E. Shalala, President of The University of Miami, said, “The University of Miami created The Launch Pad to help students use their education to start new businesses, find viable careers in entrepreneurship, and create jobs. The Blackstone LaunchPad program enables us to share our model of entrepreneurship education with our sister institutions around the nation.  It is a particular pleasure for us to join forces with USC, UCLA, and UC Irvine to help strengthen the communities and economies of the Los Angeles region, and we deeply appreciate the vision and support of the Blackstone Charitable Foundation, which make this unique national educational collaboration possible.”

Bill Allen, President and CEO of The Los Angeles County Economic Development Corporation (LAEDC), said, “The L.A. region has long been known for legendary entrepreneurs like Jack Northrop and Walt Disney and more recently Elon Musk and Patrick Soon Shiong. With the resources of the Blackstone LaunchPad, and the participation of talented venture coaches we will be supplying, we will now be able to help many more such dreamers and innovators turn their inspired ideas into successful new companies that will form the foundation of our future economy. We are thrilled that the Blackstone Charitable Foundation has chosen the LAEDC to be the regional partner working with three outstanding universities to grow the entrepreneurial capacity of our great region.”

Harvey Weinstein, Co-Chairman of the Weinstein Company, said, “Steve Schwarzman and the entire Blackstone Group were an integral part of helping Bob and me rebuild and start The Weinstein Company and I can tell you first-hand that nobody is smarter than Steve and his team. He’s not only one of the most successful businessmen around, but also one of the world’s foremost supporters and champions of education and the arts and one of the most charitable men I’ve ever met. Knowing first-hand the challenges of starting a business and having had the advantage of his guidance, I know that Blackstone LaunchPad is in the very best hands and I’m thrilled to learn that so many young entrepreneurs and students will have access to this exciting career path.”

About The Blackstone Charitable Foundation:

The Blackstone Charitable Foundation was founded at the time of Blackstone’s initial public offering in 2007 with substantial commitments from the Firm’s employees. Influenced by the enterprising heritage of the firm and its founders, The Blackstone Charitable Foundation is directing its resources and applying the intellectual capital of the firm to foster entrepreneurship in areas hardest hit by the global economic crisis. Through its investment expertise across several asset classes and geographies, Blackstone has a unique perspective on the global economy and a heightened understanding of how entrepreneurial activity is often the crucial catalyst in the growth of successful businesses, industries and communities. For more information, go to http://www.blackstone.com/citizenship/the-blackstone-charitable-foundation.

About The University of California, Los Angeles:

UCLA is California’s largest university, with an enrollment of more than 40,000 undergraduate and graduate students. The UCLA College of Letters and Science and the university’s 11 professional schools feature renowned faculty and offer 337 degree programs and majors. UCLA is a national and international leader in the breadth and quality of its academic, research, health care, cultural, continuing education and athletic programs. Seven alumni and six faculty have been awarded the Nobel Prize. For more information, visit http://www.ucla.edu/.

About The University of California, Irvine:

Since 1965, the University of California, Irvine has combined the strengths of a major research university with the bounty of an incomparable Southern California location. UC Irvine’s unyielding commitment to rigorous academics, cutting-edge research, and leadership and character development makes the campus a driving force for innovation and discovery that serves our local, national and global communities in many ways. For more information, visit http://www.uci.edu/.

About The University of Southern California:

The University of Southern California is one of the world’s leading private research universities. An anchor institution in Los Angeles, a global center for arts, technology and international trade, USC enrolls more international students than any other U.S. university and offers extensive opportunities for internships and study abroad. With a strong tradition of integrating liberal and professional education, USC fosters a vibrant culture of public service and encourages students to cross academic as well as geographic boundaries in their pursuit of knowledge. For more information, visit http://www.usc.edu/.

The LAEDC, the region’s premier economic development leadership organization, is a private, non-profit organization established in 1981 under section 501(c)(3). Its mission is to attract, retain, and grow businesses and jobs for the regions of Los Angeles County. Since 1996, the LAEDC has helped to retain or attract over 190,000 annual jobs in Los Angeles County with an estimated labor income, including wages and benefits, of approximately $12 billion. Learn more at www.laedc.org.